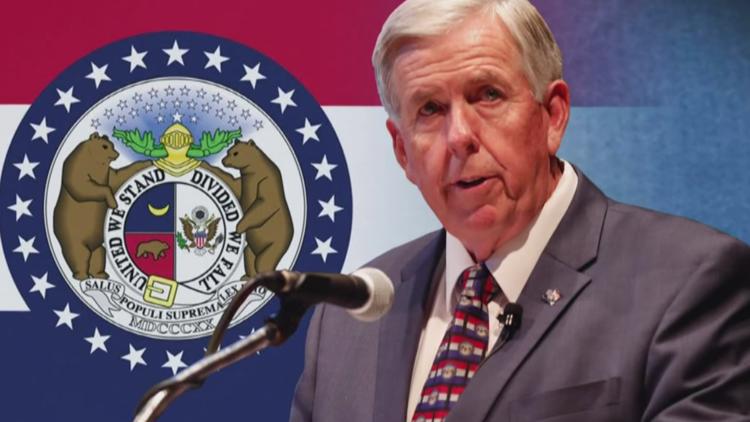 A little more than a year into his mostly uneventful stewardship of the state, the Republican governor announced Sunday that he's seeking a full term, and his folksy and low-key approach seem to be playing well following the tumultuous and brief reign of the man he replaced, Eric Greitens.

"I want to create opportunities for education. Key word, 'opportunities,'" Parson said in his announcement. "When these politicians say the word 'free,' we all know what that means. That means that you and I are going to have to pay for it. Because when it comes to government, nothing is free."

The 63-year-old Republican will face off against Auditor Nicole Galloway, the only Democrat and woman currently holding a statewide office. University of Missouri-St. Louis political scientist David Kimball said she's the best candidate the Democrats have, but she faces an uphill battle winning in Missouri, which overwhelmingly backed Donald Trump for president in 2016 and resisted the gains that Democrats made in many other states during last year's midterm elections.

"Missouri families can't afford four more years of Governor Parson," Galloway said. She criticized the drop in Medicaid rolls during Parson's tenure and cited the trend of rural hospitals closing in the state.

Parson took over in June 2018 when Greitens resigned in the face of potential impeachment over alleged campaign finance violations and sexual misconduct related to an extramarital affair. A grand jury indicted Greitens on felony invasion of privacy charges for allegedly taking a partially nude photo of the woman without her permission. However, the prosecutor later dropped the charges and Greitens has repeatedly denied that he committed any crimes.

Parson's leadership has "allowed state government to relax a bit," said Robynn Kuhlmann, a University of Central Missouri political scientist. Aside from signing a contentious ban on most abortions at or after eight weeks of pregnancy, his tenure has been largely quiet.

RELATED: 'It's a shell of what it used to be'; Residents speak out as Governor Parson promises more troopers and funding to help with gun violence

His understated and collegial approach is almost the opposite of the flashy and combative style that Greitens employed as governor. Greitens felt at home rappelling into a rodeo before the cameras, while Parson seems comfortable visiting cotton gins. In a tweet announcing the birth of his sixth grandchild in August, Parson wrote that "many folks call me 'Governor,' but to my grandkids I'm just 'Gramps.'" And he chose Bolivar, near his ranch, for his campaign announcement.

Republican Senate President Pro Tem Dave Schatz said Greitens didn't understand how the legislative process works. Parson leans into more than a decade of experience as a former lawmaker to build bridges with the Republican-controlled Legislature.

Yet Parson's more than 14 years in government as a state representative, state senator, lieutenant governor and now governor could be a liability in some voters' eyes.

"Missourians deserve better than a governor whose sole accomplishment is that he isn't Eric Greitens," the Democratic Governors Association said Saturday in a news release. "We look forward to holding career politician Parson to account for putting himself and his special interest friends ahead of Missouri."

Greitens, who was a first-time candidate, won after campaigning as a political outsider. And Democrat Jason Kander used the same approach to nearly oust Republican U.S. Sen. Roy Blunt in 2016. For this reason, Galloway's strategy of touting herself as a check on state government through her role as auditor could play well with voters, Kuhlmann said.

"She's actively serving as the state's watchdog," Kuhlmann said. "She can claim credit for upheaving what is perceived as corruption or ethical issues in state politics, the very thing Mike Parson represents as governor."

Missouri Auditor Nicole Galloway stands next to a photo of mold-damaged files from the Ferguson municipal court during a news conference Wednesday, April 26, 2017, in St. Louis, where she discussed an audit that gave a poor rating to the court. The audit launched in the wake of unrest following the 2014 fatal police shooting of Michael Brown in Ferguson, Mo. found the city's court system "in disarray" and disorganized, according to Galloway. (AP Photo/Jim Salter)
AP

That might not make much difference in a state that Trump won by nearly 19 percentage points. As of July, Trump had a 51% approval rate in the state, according to polling by Morning Consult.

Parson's most attention-grabbing action so far has been to sign into law a bill that would ban abortion after the eighth week of pregnancy, which is far earlier than the standard of viability established by the U.S. Supreme Court's landmark Roe v. Wade ruling. The law, which was blocked from taking effect because of a court challenge, includes exceptions for medical emergencies such as a risk of death or permanent physical injuries to "a major bodily function of the pregnant woman." But it makes no exceptions for cases involving rape or incest.

Although abortion-rights advocates blasted Parson's support for the bill, his support could help him with rural and conservative Christians, Kuhlmann said.

Galloway is making her opposition to the law a cornerstone of her campaign, calling it "outrageous" in an August video announcing her candidacy. When she publicly mused about making a bid for Parson's seat earlier this year, she cited the abortion law as a factor pushing her toward running.

Jim Neely, a state representative from Cameron, last month announced plans to challenge Parson for the Republican nomination. His chances are slim against an incumbent governor.