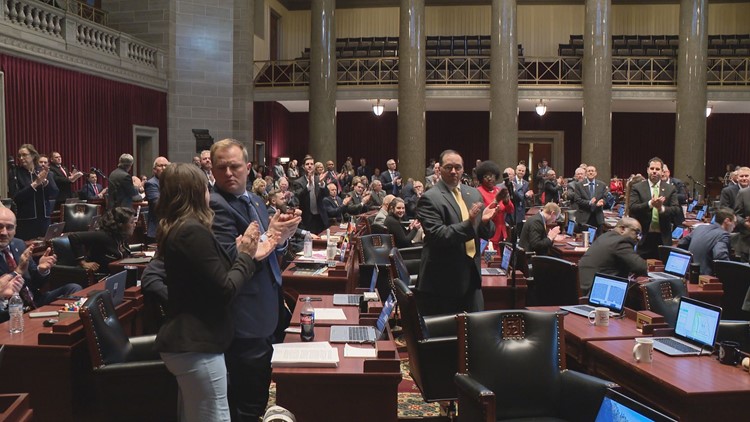 In a setting that hails to the days of old, two young lawmakers are hoping to legislate Missouri into the future.

"It’s a huge honor that people are entrusting me to make some tough decisions but hopefully make their lives better," Freshman Rep. Rasheen Aldridge told 5 On Your Side. He was sworn in as the newest Democrat from St. Louis, Wednesday afternoon.

Both hope to achieve a similar goal, cutting down on crime in St. Louis, just in different ways.

"By creating this registry, we’re trying to stop these criminals or at least draw a connection to some of these crime scenes," said Aldridge.

Aldridge believes a big way to cut down on crime is to create a lost or stolen firearm registry, similar to a law already enacted in Illinois.

"When we find these guns at crime scenes and try to connect them back to what happened and where’d it go, so we can know a little bit of how many guns are out on the streets," he said.

For Schroer, part of the solution to cut down on crime is punishment.

"Felons that should not have access to guns are using them. We’re enhancing criminal penalties on them, making that a dangerous felony, where they would have to have 85% of their sentence served until they’re eligible for parole," said Schroer.

"If a prosecutor is not upholding her oath of office and doing what they should be doing, they could turn that case over to the Attorney General and allow them to have jurisdiction where the case originated," Republican from O'Fallon said.

Schroer has also signed on to a bill that would require each school have an armed student-resource officer on site every day.

Despite Mayor Lyda Krewson's support for repealing the rule that requires St. Louis police to work and live in St. Louis, Rep. Aldridge says he wouldn't support it.

Schroer says he's for it.

An age-old rule still rings true for lawmakers of all ages, however: majority rules.

Republicans outnumber Democrats in the Missouri House 114 to 48.

That means Aldridge's party is the one who will have to find the common ground.

"We all want one common thing, we want a better Missouri," said Aldridge.

While crime bills are the focus for those two legislators, both parties have other priorities including Medicaid access in Missouri, infrastructure and workforce development.

RELATED: Say goodbye to the sun! Rain on Thursday and Friday will bring flash flooding risk