Missouri senators yet to back results of election 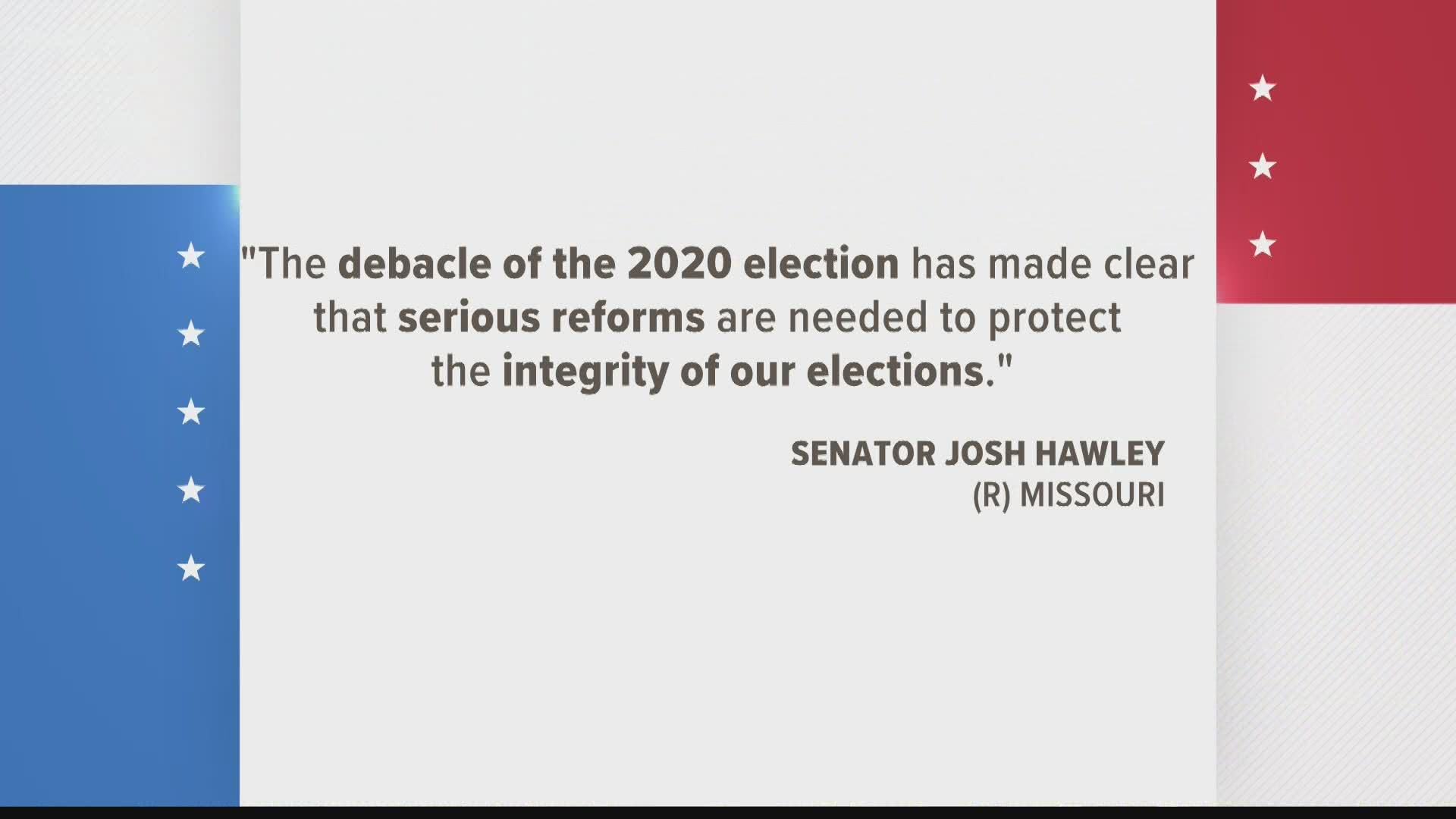 ST. LOUIS — President-elect Joe Biden continues to move forward with his transition team without help from the Trump administration and many elected Republicans have yet to accept Biden's projected victory.

In Missouri, former Republican office holders like Senator John Danforth have said they believe Joe Biden will be the next president. But, a lot of those still in office seem to still have doubts about the results.

By this point in the 2016 election Hillary Clinton had conceded and President-elect Trump was meeting with President Obama to begin his transition to power after an election that was closer than 2020.

This time Republicans are questioning Joe Biden's projected win - alleging or alluding to irregularities in the election, so far, without evidence of wide spread problems that would change the result.

"The President wasn't defeated by huge numbers. In fact, he may not have been defeated at all," Senator Roy Blunt, (R) Mo. told reporters in Washington, D.C. Tuesday.

Also Tuesday, the state's other Republican Senator Josh Hawley called the 2020 election a "debacle" in a press release.

"...last Tuesday made clear that serious reforms are needed to protect the integrity of the our elections," Hawley said in a statement.

The Senator and his office declined to clarify what he meant by "debacle."

Hawley introduced legislation that his office says calls for mail-in ballots to be counted as soon as they are received with the results kept secret until election day - something Republicans prevented in Pennsylvania where mail-in counting couldn't get started until after the election.

Hawley also wants to end so-called 'ballot harvesting' the practice of collecting and turning in absentee ballots for other people.

Washington University professor of politics Steven Smith says the only example of wide spread fraud with ballot harvesting on the national level was by a Republican candidate last year in North Carolina.

"Now's the time to do it," said Smith. "I think that if the federal government took the lead in improving registration procedures and counting procedures and security procedures we would find that the states would follow suit for their own state and local elections."

But are the questions raised about this election doing damage to the credibility of future elections?

Smith says while it's not common for a president to refuse to concede it's not time to worry either, yet.

"There's nothing that's a threat to our Constitution or our democracy at the moment," said Smith who serves as the Kate M. Gregg Distinguished Professor of Social Science at WashU.

But, Smith says, "If we get to December 8th, which is supposed to be the safe harbor day where everything is settled, or December 14th, when the electors actually sign their ballots...(and) there are games being played, lawsuits holding up that electoral vote process. That's when our system might be challenged," he said.

"We do not have constitutional processes or even statutory guidance on how to handle all of those possibilities," said Smith.

Tuesday, Senator Blunt's office declined to offer clarification on his comments that President Trump, "may not have been defeated at all." And instead referred to his comments over the weekend when they said he told ABC's This Week, “You know, actually, the media can project but the media doesn't get to decide who the winner is. There is a canvassing process. That needs to happen. I said on Friday I thought it was time for the president to turn this discussion over to his lawyers, time for the lawyers to make the case that they have, both in court and to the American people. And then we're going to have to deal with those facts as they're presented. That has to happen and then we move forward.”