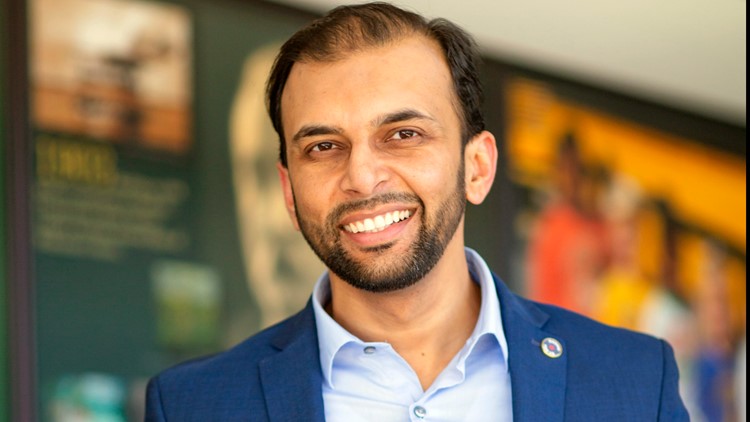 Photo by: AP
In this March 23, 2019 image provided by the campaign of Qasim Rashid, state Senate candidate Qasim Rashid poses at the Stafford County Courthouse in Stafford, Va. Joseph Cecil Vandevere, is charged with interstate communication of a threat to injure a person in connection with a tweet directed at Virginia state Senate candidate Qasim Rashid. The tweet included a picture of a lynching and read, "VIEW YOUR DESTINY." (Marion Meakem Photography/Quasim Rashid Campaign via AP)

A North Carolina man charged with anonymously threatening to lynch a Muslim-American political candidate in Virginia also is accused of posting an anti-Semitic threat on a Florida synagogue's Facebook page.

Investigators linked Vandevere to a threatening comment posted in February 2018 on the website of a synagogue in Plantation, Florida, the affidavit said. A rabbi at Ramat Shalom Synagogue contacted the FBI after somebody using the name Bob Smith posted a "disturbing" comment in response to the rabbi's post showing support for the Parkland, Florida, high school where a gunman killed 17 people earlier that month, the agent wrote.

Vandevere is charged with interstate communication of a threat to injure a person in connection with a tweet directed at Virginia state Senate candidate Qasim Rashid. The tweet included a picture of a lynching and read, "VIEW YOUR DESTINY."

Rashid posted a screenshot of the threatening tweet in March 2018 and reported it to the FBI.

The FBI subpoenaed Facebook records associated with the "Bob Smith" account after the Florida rabbi reported the anti-Semitic comment, which called for "public arrests and executions" of "dual citizen Jews." Responses to the Facebook subpoena and a separate subpoena to telecommunications company Charter Communications linked the account to Vandevere, the agent wrote.

"The review of the Facebook search warrant results disclosed that the Facebook account was used by Vandevere mainly to harass other people," the affidavit said, noting that Vandevere called it his "attack dog" account.

An "open source search" using Vandevere's telephone number linked him to the same Twitter account — with the handle "DaDUTCHMAN5" — that posted the threat against Rashid, according to the affidavit. The post was accompanied by a black-and-white photograph of the infamous 1915 lynching of a Jewish man, Leo Frank, in Marietta, Georgia.

The FBI obtained a warrant to search Vandevere's apartment in Black Mountain, North Carolina, and seize records related to the Facebook and Twitter accounts.

Rashid, a 36-year-old attorney who works on immigrant rights cases, told The Associated Press on Monday that he is pleased law enforcement officials are treating the tweet as an act of "extremism."

"I think this is how you protect free speech and a genuine exchange of ideas," he said.

The FBI arranged for Vandevere to be taken into custody Wednesday at the Asheville courthouse. He didn't enter a plea during his initial court appearance. He was freed on $25,000 bond and is scheduled to be arraigned on July 15, according to online court records.

A magistrate judge ordered Vandevere to refrain from using social media during his pretrial release, said Lia Bantavani, spokeswoman for the U.S. Attorney's office for the Western District of North Carolina.

There is no indication that Vandevere has been charged in connection with the threat posted on the synagogue's Facebook page.

The charge against Vandevere is a felony that carries a maximum sentence of five years in prison. Neither Vandevere nor his attorney, Andrew Banzhoff, immediately responded Wednesday to phone messages and emails seeking comment.