Political points to be gained for St. Louis prosecutor and Republicans sparring over McCloskey case 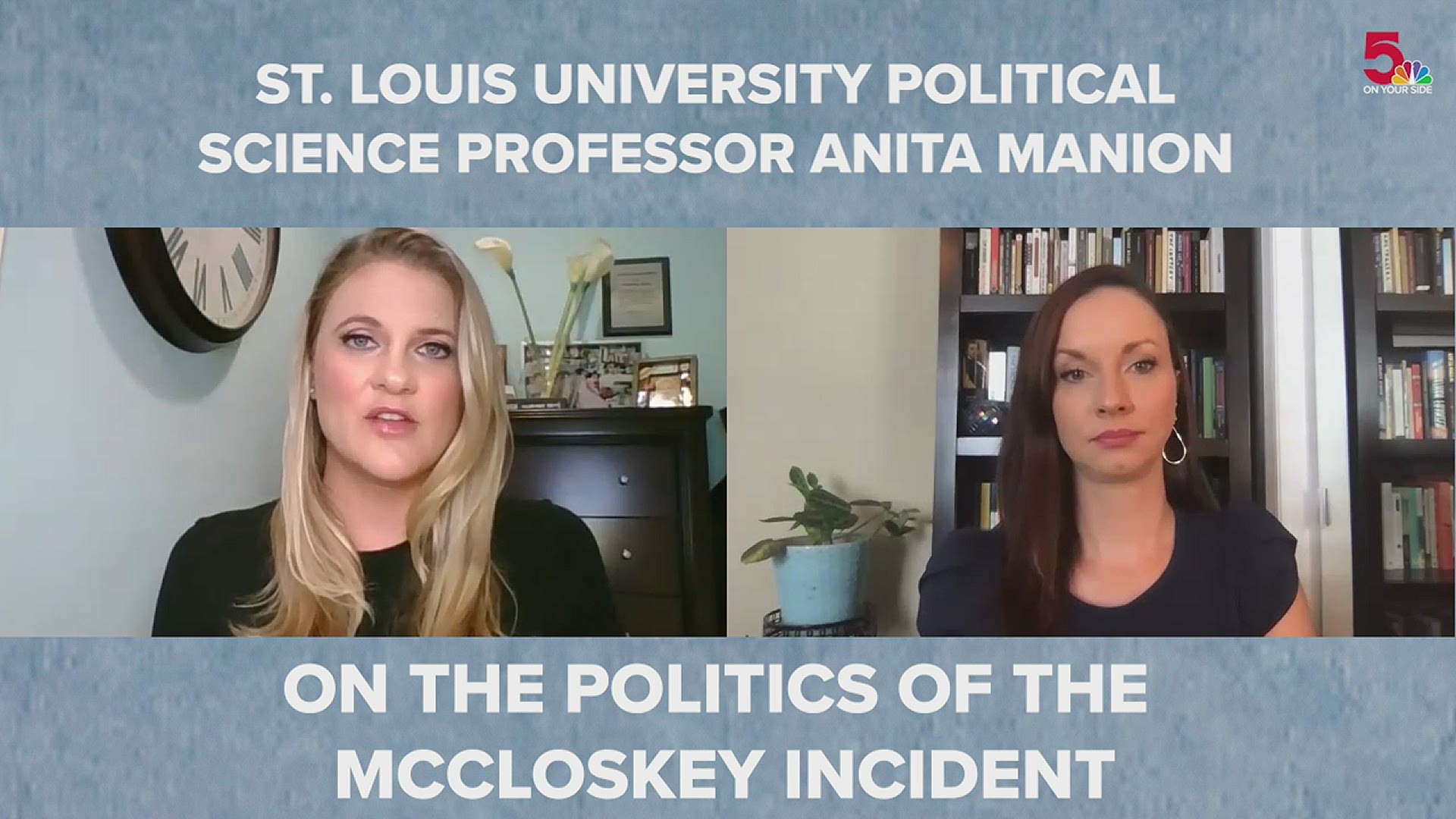 ST. LOUIS — St. Louis Circuit Attorney Kim Gardner may perhaps gain the most politically from the parade of Republicans now marching in on her pending decision to prosecute a St. Louis couple now famous for confronting protesters with guns.

The confrontation happened as protesters were on their way to St. Louis Mayor Lyda Krewson's home after she read names and addresses of people who had supported defunding the police department during a Facebook Live.

In just three weeks, St. Louis voters will go to the polls to decide whether to give Gardner, the first Black woman to serve as the city’s circuit attorney, a second term in office.

And now, it seems, a vote for Gardner could symbolize more than just a vote for the local office. It could represent a vote against Trump and the Republican party, said Anita Manion, an assistant professor of Political Science at the University of Missouri-St. Louis.

“It’s a primary election, so it’s just going to be Democrats voting for who they’re candidate should be in November, and the fact that President Trump and Sen. Hawley are coming out against her isn’t a bad thing for her,” Manion said.

Missouri Gov. Mike Parson kicked off the parade against Gardner earlier this week by announcing that he had spoken with President Donald Trump about the case involving Mark and Patricia McCloskey, and that the president vowed to do what he can to “help.” The McCloskeys made national news after photos of them confronting protesters with guns went viral.

5 On Your Side first reported that police served a search warrant at their home Friday, and seized the rifle Mark McCloskey used during the confrontation. The next day, an attorney who worked for the couple turned over a pistol Patricia McCloskey pointed at protesters to police. Chief John Hayden confirmed Thursday that his department has applied for warrants against the couple, and the decision on whether to issue them now rests with Gardner.

Those rights being the Second Amendment’s right to bear arms – a cause that’s near and dear to the Republican party and the bases of Trump, Parson and Hawley, Manion said.

“Of course, in an election year, everything has political consequences and repercussions and political strategies behind what they do,” Manion said. “And so I would say that for Governor Parson, he is up for election this year and he wants to really, I would say energize his base voters and those will be people who associate very closely with President Trump, who believes strongly in second amendment rights.

“Through his statements recently, Gov. Parson is really aligning himself with those values and maybe hoping to motivate those voters to turn out for him. And I would say also the same with President Trump, these are issues that ignite his base…This is another way of framing (protesters) as violent and framing the McCloskeys as people who are protecting their home against rioters and looters and exercising their second amendment rights and being prosecuted by raging liberals, and, in this case, Kim Gardner.”

Gardner issued a one sentence-response to Hawley’s letter, which read: “I am deeply disappointed that a U.S. Senator would intervene in a local matter that is under investigation.”

She also responded to Hawley’s tweet on the issue, writing: “Baseless. Our office will continue to investigate this mater, and will not be bullied by a sitting U.S. Senator or anyone else.”

But there is one local Republican who is not joining the parade – St. Charles County Prosecutor Tim Lohmar. 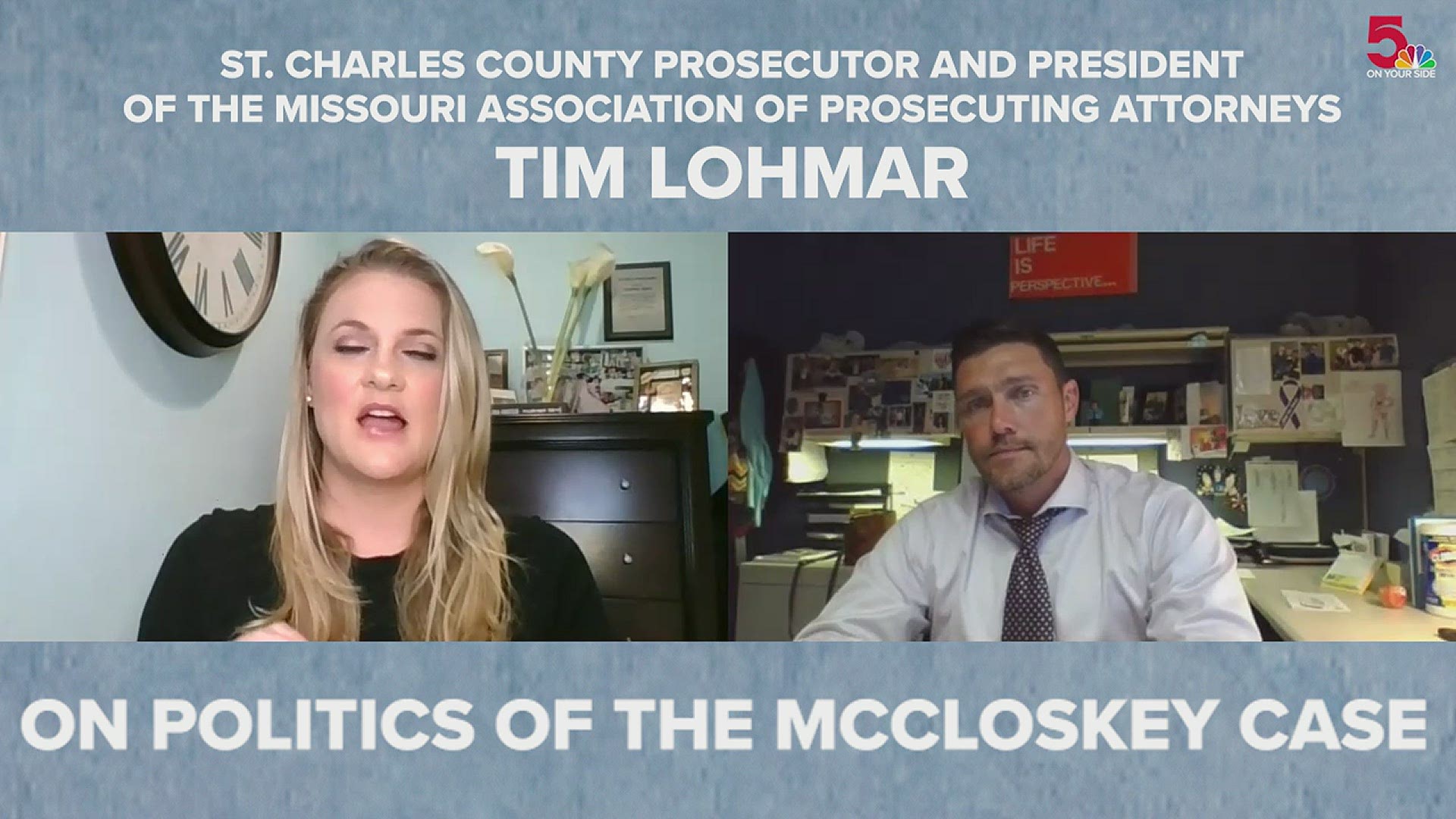 He also serves as the president of the Missouri Prosecutor’s Association, and said Thursday, the association of the state’s 115 elected prosecutors disagrees with the outside interference into her charging decision in the McCloskey case.

“One of the basic general Republican ideals is local control is the best control, and I think that applies in this situation,” he said. “I have relationships with my Republican colleagues who are involved in this and I respect their positions and respect to their feelings about this because they have a constituency that they're accountable to as well – a big percentage of which lives in the St. Louis area, so I can certainly understand their concern.

“But when I look at it from my perspective as a prosecutor, an elected prosecutor and as the president of the association, we just maintain that the beauty of our system is that the prosecutor's office must remain independent.”

Missouri’s prosecutors also defended Gardner when Missouri Attorney General Eric Schmitt lobbied to get concurrent jurisdiction in the city of St. Louis. The move would have allowed him to issue cases in Gardner’s jurisdiction even if she declined to do so. Schmitt is a Republican, and the plan did not advance out of the legislature.

Schmitt has been one of the most outspoken critics of Gardner’s tenure, saying she has not been issuing enough charges and is a reason why the city’s crime is rising.

Lohmar said the association’s decision to support Gardner’s autonomy remains the same now as it did during the debate over concurrent jurisdiction.

“In the City of St. Louis, violent crime and Kansas City's as well, has skyrocketed, so to ask questions and have concerns, that’s certainly reasonable, but from our membership standpoint we just maintain that the prosecutor's office must maintain its independence across the board and if the prosecutor is not doing the job that he or she should do the answer is at the ballot box every four years and that constituency has the right to say, ‘We think you did a great job,’ or ‘We don't think you're doing enough.’”

For Gardner, and St. Louis, that answer will come Aug. 4.