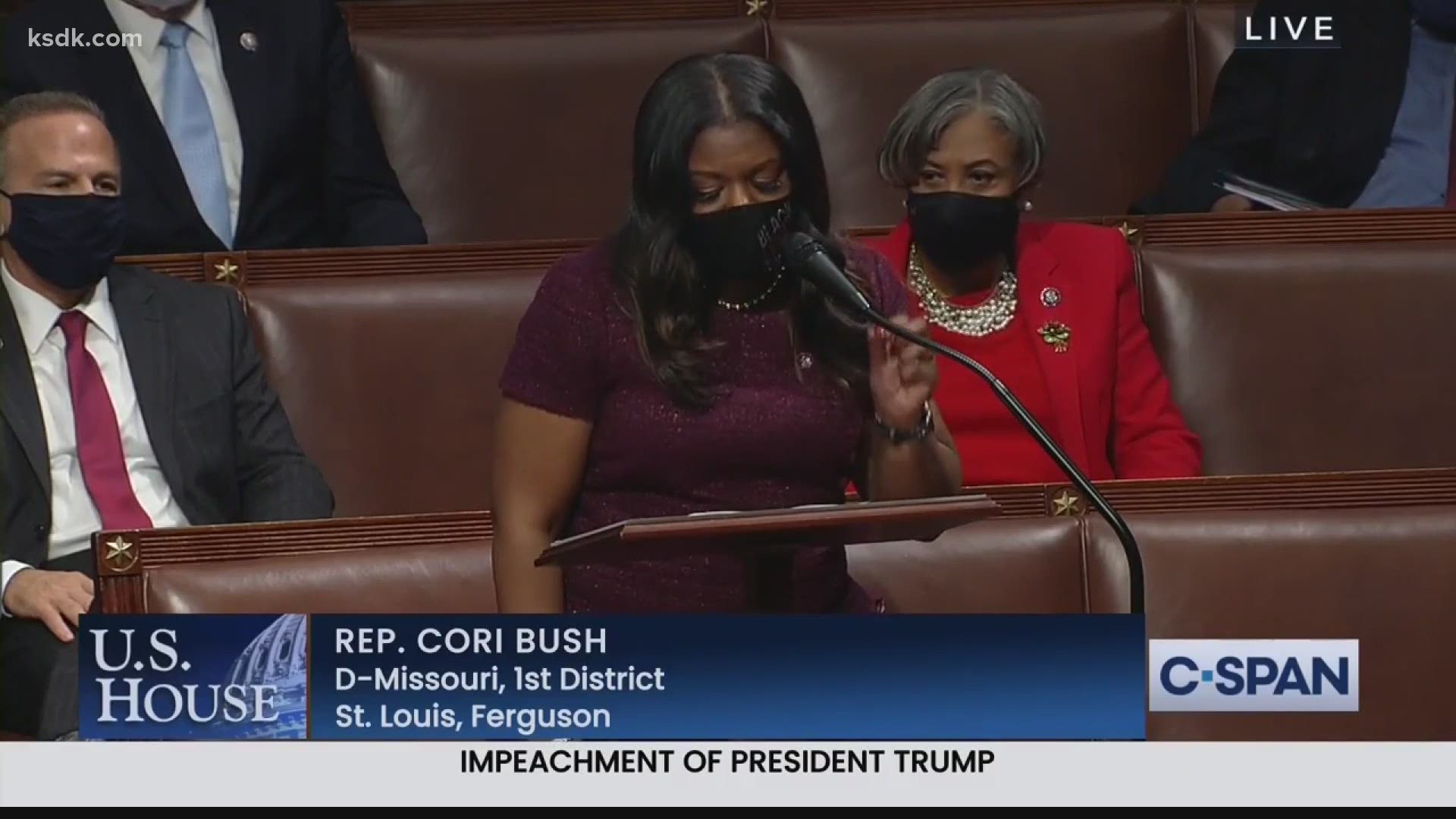 ST. LOUIS — On Wednesday, President Donald Trump became the first president to be impeached twice by the House.

The impeachment process will now move to the Senate. It's unlikely a trial would occur before the Jan. 20 inauguration of President-elect Joe Biden.

“January 6 was a dark and tragic day for our nation. We have a democratic process for a reason, and the future of our republic depends on us respecting the results of the free and fair elections in which we all participate. A hallmark of our country is peaceful protest, but last Wednesday’s actions were not peaceful, they were violent actions intended to disrupt Congress’s constitutional duty in the Presidential transition. President Trump’s statements during and in the immediate aftermath of last week’s assault on democracy were antithetical to the leadership our nation desperately needed in a time of crisis. America needs strong leadership right now. With so little time left this term, specifically with regard to the Senate impeachment process, I fully agree with President-elect Joe Biden when he stated the “quickest way” for the President to be out of office will be to wait for January 20th when the President-elect is sworn in.

“It has barely been a week since those horrible events, and the impeachment process has moved at lightning speed. A consequential vote of this nature, something that has happened rarely in our nation’s history, should only be taken after the appropriate investigations and a complete airing of the facts so our vote can be fully informed. This is a necessary step for impeachment that has been bypassed.

“That does not mean, however, that President Trump should escape accountability for his role in the violence that took place January 6th. I support censuring the President for his rhetoric to ensure that his behavior is not deemed acceptable to future leaders, or to our adversaries around the globe. While I am confident that a bipartisan censure resolution would pass both the House and Senate, unfortunately Speaker Pelosi has chosen further divisive actions that stand no chance of being implemented and do nothing to hold the President accountable. Our nation needs to heal and come together, not retreat further into partisan corners.”

Congresswoman Cori Bush spoke for just 30 seconds during the impeachment debate Wednesday afternoon in the U.S. Capitol, but in that time, she made her point clear: saying President Donald Trump should be removed from office. 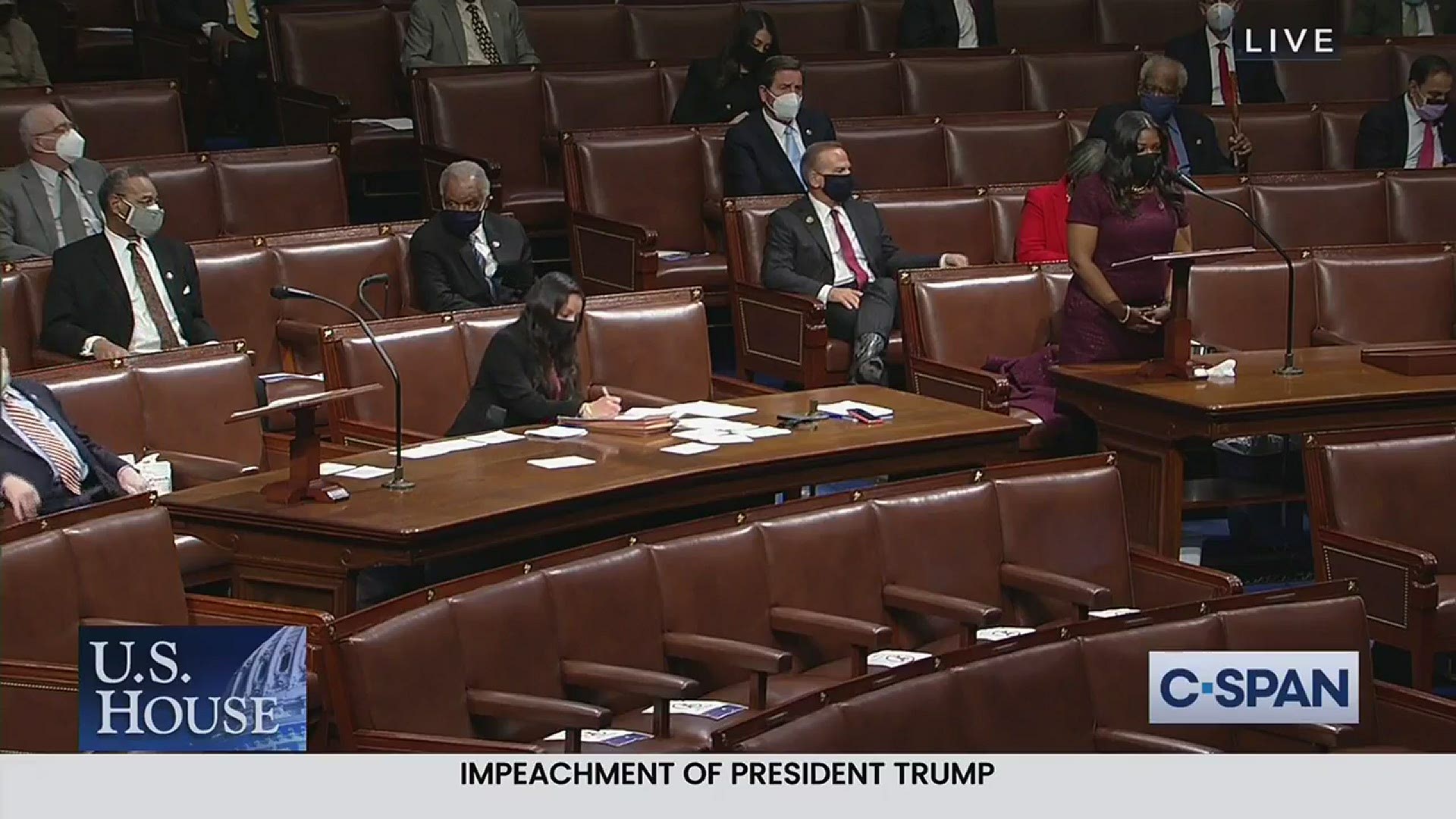 Congressman Blaine Luetkemeyer (MO-03) released the following statement regarding his vote against the article of impeachment:

“These are the words of Vice President Mike Pence as he urged Congress ‘to avoid taking action to further divide’ our hurting country. The Vice President’s words come just days after the horrific attack on our Capitol while he oversaw the joint session of Congress. January 6th was a truly horrible day for our country that will leave a lasting scar on our history. Unfortunately, the actions of the House in the days since have only sought to deepen the wound. Non-binding resolutions demanding the inappropriate use of the 25th Amendment and rushed impeachment proceedings before law enforcement and intelligence agencies can even complete investigations are the exact opposite of what our country needs and deserves.”

“For the first time in United States history, a sitting President has been impeached on two separate occasions by the House of Representatives – a testament to the resiliency of our Constitution, but an ugly stain on our nation’s history,” said Governor JB Pritzker. “Make no mistake: to hold accountable those who smear our democracy, who unleash violence and death upon the halls of Congress, who dance on the desks of duly elected public servants in the name of insurrection – and yes, those who incite it all from inside the world’s most powerful office – is the most patriotic thing we can do.

We cannot rebuild without ridding ourselves of what’s rotten. We cannot hope to unify without upholding the ideals of justice, democracy and liberty that tie us together as one nation. Today, Republicans joined with Democrats to send that message.

The events of January 6th, 2021 – and the weeks’, months’ and years’ worth of falsities and fantasies that led up to them – represented a culmination of Donald J. Trump’s longstanding efforts to channel hate and demagoguery into power. As a proud American, I have long feared the repercussions of these efforts, and the choice of the national Republican party to embrace them and its media ecosystem to amplify them. He has long posed a danger to our nation – and last week, the world watched in horror as his name was carried on flags – alongside the flag of our nation’s most infamous traitors, the Confederacy – in a siege on our Capitol. And I believe fully that we would be remiss to assume the threat of such efforts lies behind us.

But today, amid sorrow, amid worry, amid the bruising impact of a pandemic on pace to soon take over 400,000 American lives: I am hopeful. By impeaching President Trump on the charge of Incitement of Insurrection, the House of Representatives has taken a necessary step toward holding accountable a president whose very hallmark has been the derision of our democracy. In the constant pursuit of our nation’s finest ideals, the promise of a more perfect union lives another day. Our work to secure it continues, and I urge the Senate to take up its duty immediately.”

U.S. Representative Rodney Davis (R-Ill.) today voted no on the article of impeachment against President Trump and released the following statement:

"We are at a perilous moment in our Nation’s history. President Trump, many of his allies in Congress, and media commentators on the right deserve blame for the circumstances that led up to one of the worst days this great country has ever seen. Since November, many in my party perpetuated the lie that the election was “stolen” and gave false hope to millions that the president could somehow remain in office after January 20th. That was never going to happen. There must be accountability for leaders who deliberately misled the public, but I fear that without thoughtful and clear-eyed leadership from both sides of the aisle, we are in danger of further violence and political unrest.

"While a convenient talking point, we must be honest that our country did not arrive at this moment in the last two months, or simply the last four years. Though many prefer not to admit it, political deception is a bipartisan disease that seems only to worsen and lead to violence. Last Wednesday is the second time in my short Congressional career that I’ve needed to thank law enforcement for saving my life during an act of political violence. The former because a deranged gunman believed leaders and agitators on the left that I and my Republican colleagues were a danger to America. We as a country have got to do better.

"There must be a full accounting of what happened leading up to and on the day of January 6th. Law enforcement must have all resources necessary to bring the perpetrators to justice. That investigation should be unimpeded and free from partisan influence. The investigation should be conducted in such a manner to sooth tensions and provide the public with confidence that law and order will prevail.

"Process matters. A snap impeachment conducted without a full investigation or without due process for the president accomplishes nothing. At a time when political tensions are at an all-time high, impeachment will drive people further into their corners and could lead to additional violence. Unlike what some Democratic leaders are saying, President Trump will not be removed from office under this process. The Democrats’ stated goal to punish the president and bar him from seeking federal office in the future certainly isn’t urgent. He will be removed from office under the law in less than one week. We need to lower temperatures, not enflame them. If, when a full accounting of the facts of January 6th comes in, Pelosi and the Democrats wish to punish President Trump, they can pursue that process with their party’s total control of the legislative and executive branches of the federal government.

"Our nation needs sober-minded leaders who will sooth a wounded electorate. President-elect Biden has missed an opportunity to act on his promise of unifying the country by calling for calm and pledging to listen to those who feel so ignored by our elected leaders. He is now the face of his party and will be the legitimately elected leader of our country in a matter days. I stand ready to work with President-elect Biden on solutions to the many problems our country faces. We should all wish President Biden success, for when he succeeds, our nation succeeds."

“If we are truly going to begin the work of healing the deep divisions in America, we must first turn down the temperature and tone down the rhetoric. I fear that efforts to impeach President Trump or force Vice President Pence to invoke the 25th Amendment will only make a bad situation worse. Therefore, I strongly oppose Speaker Pelosi on both tactics, which are being rushed through Congress with unprecedented speed and little opportunity for the president to defend himself. President Trump has committed to a peaceful transition of power one week from today; and we would all be best served by dedicating that short time to making the process as seamless as possible.”

“Now that the House of Representatives has impeached Donald Trump, the Senate must act immediately to start the trial to convict and remove this dangerous man from office. We must make it clear that there are consequences for inciting violence and fomenting insurrection.”

This story will continue to be updated as 5 On Your Side receives statements from area lawmakers.

RELATED: VERIFY: Impeachment does not undo a president's pardons