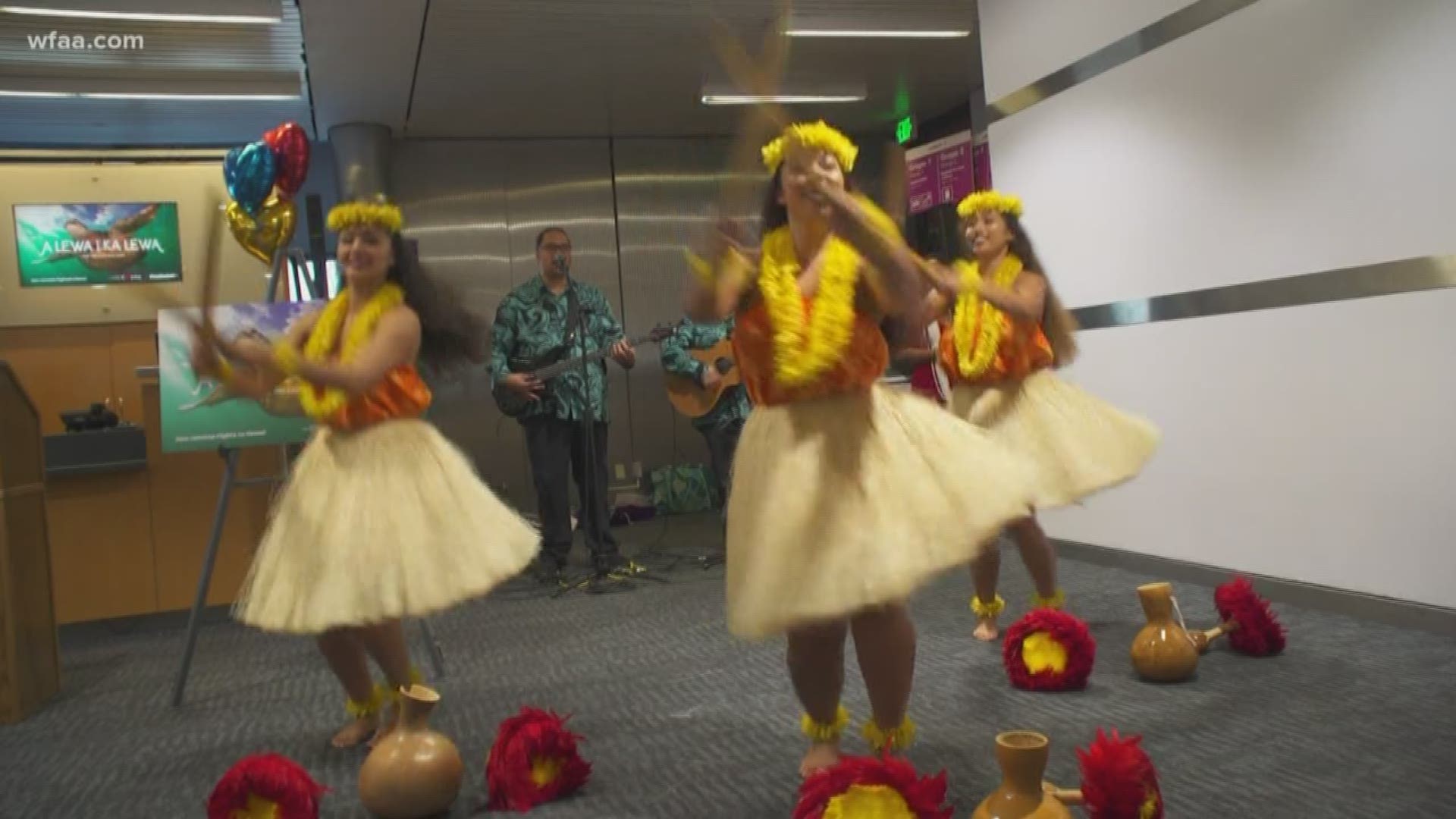 HONOLULU — Southwest Airlines Flight 6808 landed at 7:02 p.m. CDT in Honolulu on Sunday, marking the first time the Dallas-based airline has flown passengers so far over open ocean and expanded to such a distant destination.

“This is absolutely huge. You know it’s been a tough year for Southwest Airlines. You know, we’ve had a lot of challenges. It’s been a bittersweet year with the passing of Herb Kelleher. We need a milestone, we need something where we can stand up and cheer Southwest Airlines and that’s what this is today,” said Capt. Michael Styer, a 27-year veteran pilot for Southwest, who commanded the inaugural flight.

More than two hours before departure from Gate 4 at the airport in Oakland, California, passengers and employees gathered to take pictures and collect souvenirs from the airline.

“Going back to Louisiana and seeing this makes me want to go to Hawai'i,” said Donald Batiste, who stopped to take pictures of the Hawaiian band and hula dancers performing.

Southwest has talked about expanding to Hawai'i for years but finally applied for Extended-range Twin-engine Operational Performance Standards (ETOPS) certification from the FAA in January 2018. ETOPS allows for "extended operations" over open ocean, something Southwest Airlines has not previously needed.

Flight 6808 was operated on a Boeing 737-800, one of about a half-dozen Southwest aircraft that are ETOPS certified with extra life rafts and additional communication devices.

This first flight carrying passengers left from Oakland, where Southwest will begin four daily departures to Hawai'i. Those flights put Southwest in direct competition here with Alaska Airlines which operates the same route.

Two daily flights to Honolulu will also soon begin from nearby San Jose.

Sacramento and San Diego will launch flights to Hawai'i later this year, the airline said.

“They certainly have food on board, but it’s for sale. Ours is complimentary and that’s what we stand behind and we’re really proud of,” said Sonya Lacore, Southwest Airlines' vice president of in-flight operations.

Southwest is known for its cult-like following, but there are few loyalists like the Klan family from Erie, Pennsylvania.

Tim, Holly and Mark Klan have flown on the first flights to 28 other Southwest destinations over the last decade. Honolulu is their 29th inaugural flight on Southwest.

“We have five more Hawai'i flights booked for Southwest in the next two months so we have to kind of pace ourselves. We can’t spend a whole week there. We’ll spend a day five times,” said Tim Klan.

In true Southwest style, hula dancers performed in the center aisle of the aircraft during the five and a half hour flight.

Surprisingly, Hawai'i is not the longest flight for Southwest Airlines.

Oakland to Newark still holds the record at 2,555 nautical miles.

The Oakland to Honolulu flight is the sixth longest now in Southwest’s system at 2,408 nautical miles.

“This is not a route that folks living in North Texans are necessarily going to jump on. There are a lot of non-stop options for you to get to Hawai'i. However, this is something if you are loyal to Southwest and you’ve got a lot of Rapid Rewards points, this is a great way to get there,” explained Scott Mayerowitz, The Points Guy.

The airline hopes having Hawai'i as a destination will attract more of the lucrative business customers, giving them somewhere else to redeem their frequent flyer points.

WFAA, the only television station on this first flight, purchased tickets for its reporter and photographer.