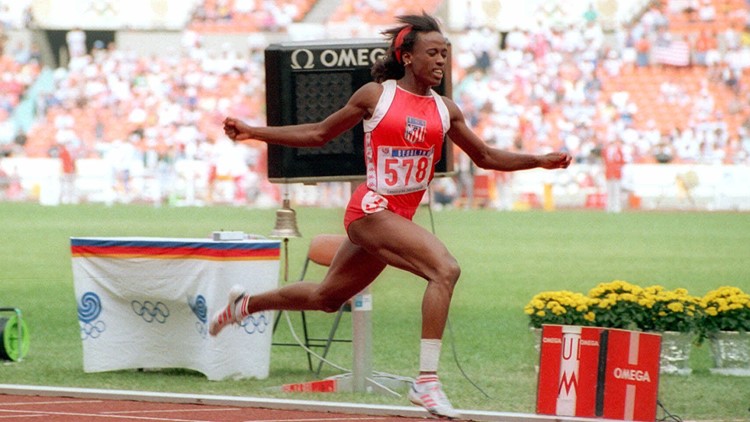 Photo by: ASSOCIATED PRESS
Jackie Joyner-Kersee of East St. Louis, Ill., strides toward finish line in the 200 meter portion of the heptathlon in Seoul, Sept. 23, 1988. She won the race in 22.56 seconds and went on to lead the field after four of the seven hepthathlon events. (AP photo/Michel Lipchitz)

Other local Olympians will be joining Jackie such as Josh Pauls, Jim Campbell, Jim Chaplin, Brendan Eppert, Stacey Smith and Lou Vitucci along with hundreds of people from around the region at the 1904 Olympic Stadium, Francis Field at WashU.

The event will run from 10 to 11:15 a.m. starting with Joyner-Kersee and Pauls answering questions for anyone attending at the Sumers Recreation Center.

At 10:30 a.m., there will be a run/walk at Francis Field where participants can take photos in front of the Olympic Spectacular located at the end of Olympian Way next to the field.

The event is free and open to all ages, but preregistration is required.

Participants must register online by the end of the day Thursday, June 20. There will be no on-site registration.

The Blues are all-St. Louis now