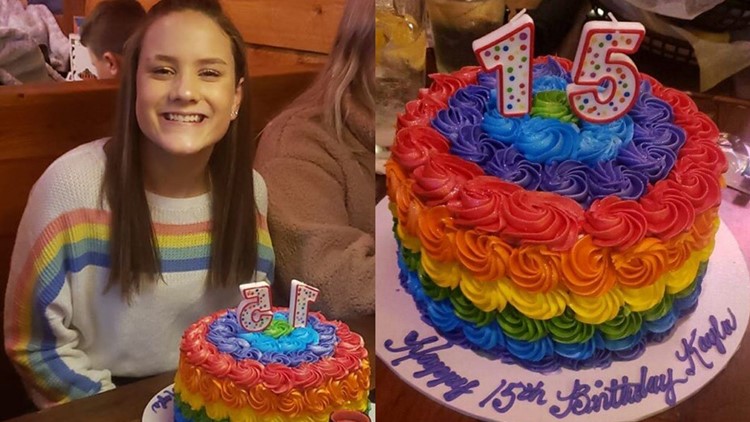 Student expelled from private school in Kentucky after photo with rainbow shirt and cake, mom says

LOUISVILLE, Ky. — A student at Whitefield Academy, a private Christian school in Louisville, was expelled after posting a photo on social media that featured her in a rainbow shirt with a rainbow birthday cake.

Kayla Kenney's mother, Kimberly Alford, sent WHAS11 an email from Whitefield Head of School Bruce Jacobson that said Kayla Kenney was dismissed after the administration was made aware of a photo that showed a "continued breach" in the school's code of conduct.

Jacobson attached the photo of Kenney with a rainbow cake in his email, saying it "demonstrates a posture of morality and cultural acceptance contrary" to the school's philosophy.

Jacobson mentioned that the school had met with Kenney's parents in October 2019 to explain that "promotion, celebration, or any other actions and attitudes" counter to Whitefield's philosophy would not be tolerated.

While Whitefield's parent/student handbook does say the school reserves the right to refuse admission or dismiss a student whose conduct outside of school counters their Christian values, Alford said the school just made an assumption based off her daughter's clothes and cake.

Alford appealed the dismissal, saying she was told during her previous meeting with Whitefield officials that they were prepared to help guide her daughter through "this situation," and that her daughter has conducted herself in "a positive direction" since the meeting.

Alford said a receipt would show she did not specifically request a rainbow cake, saying she just asked for a floral assortment in different colors. She also said the school never spoke to her family while making the decision.

"I do not think Kayla should be held accountable for a cake that I purchased with no intention of promoting a posture of morality and cultural acceptance that contradicts that of Whitefield Academy," Alford said. "The only celebration that was taking place was my daughter's 15th birthday."

WHAS11 reached out to Whitefield Academy, who said the expulsion was a result of Kenney violating the code of conduct "numerous times," not just the social media post that was highlighted in their letter.

“Inaccurate media reports are circling stating that the student in question was expelled from our school solely for a social media post," the statement said. "In fact, she has unfortunately violated our student code of conduct numerous times over the past two years."

The school said its code of conduct was on par with other private Christian schools in the area, and that it is "unfortunate" her mother "chose to post internal family matters on social media."

The school's official dismissal letter, the dismissal e-mail to Kimberly Alford and Alford's appeal can be read below: 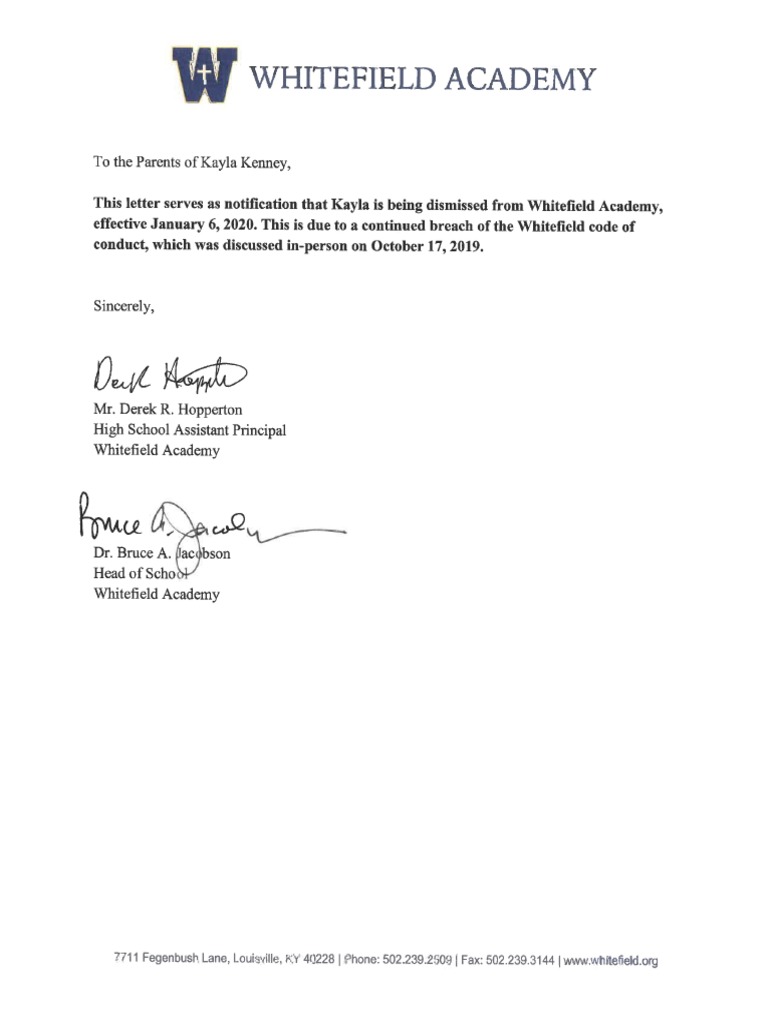 Whitefield Academy Dismissal Letter
Discover everything Scribd has to offer, including books and audiobooks from major publishers. 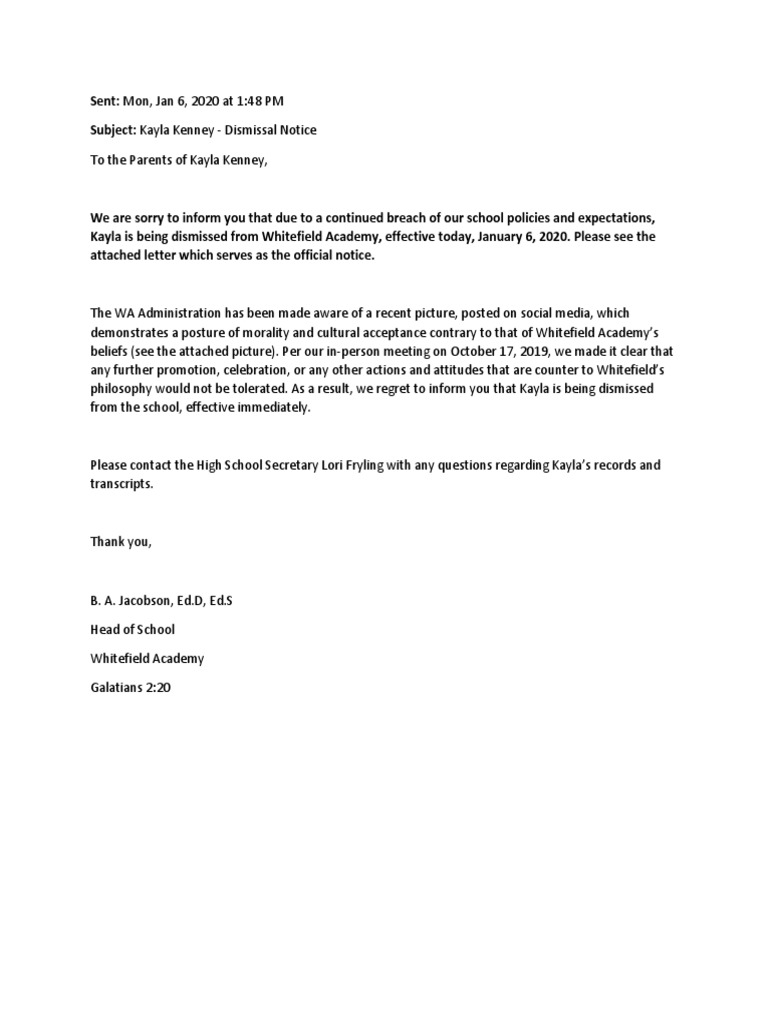 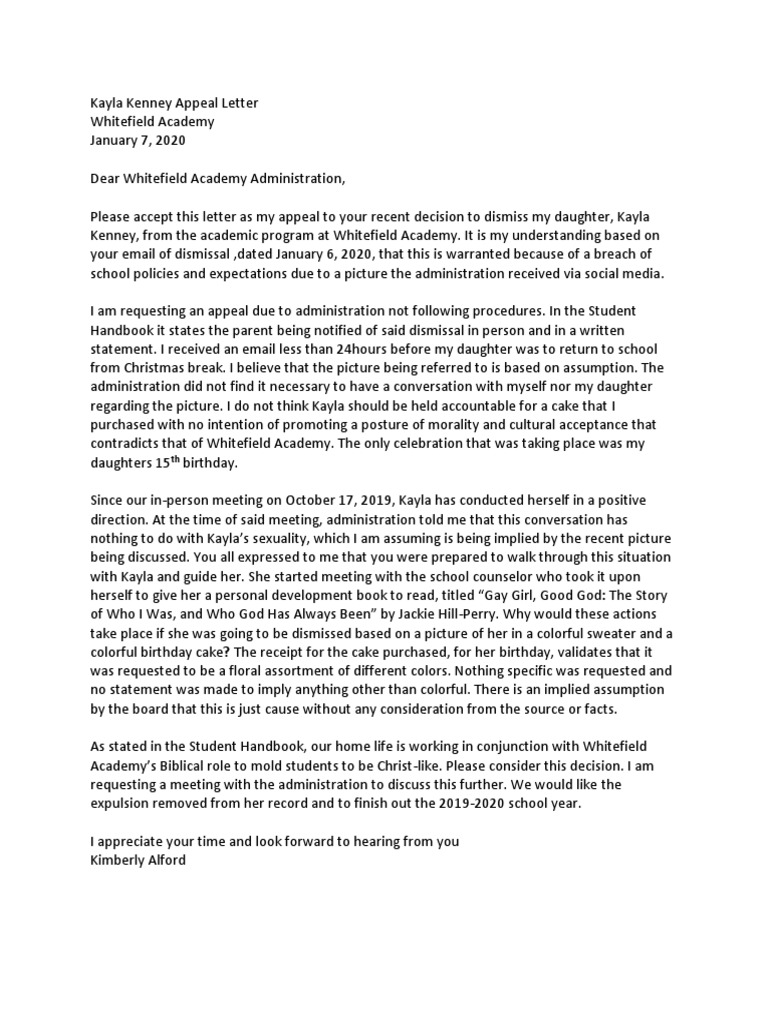 Kayla Kenney Appeal Letter
Whitefield AcademyJanuary 7, 2020 Please accept this letter as my appeal to your recent decision to dismiss my daughter, KaylaKenney, from the academic program at Whitefield Academy. It is my understanding based onyour email of dismissal ,dated January 6, 2020, that this is warranted because of a breach ofschool policies and expectations due to a picture the administration received via social media.

RELATED: Bill would require 'In God We Trust' posted in every Indiana classroom

RELATED: Kentucky schools working on 'In God We Trust' displays