The ball got rolling back in August when Anne Lawing started to spot people coming out of Greenside Apartments next door with their dogs. 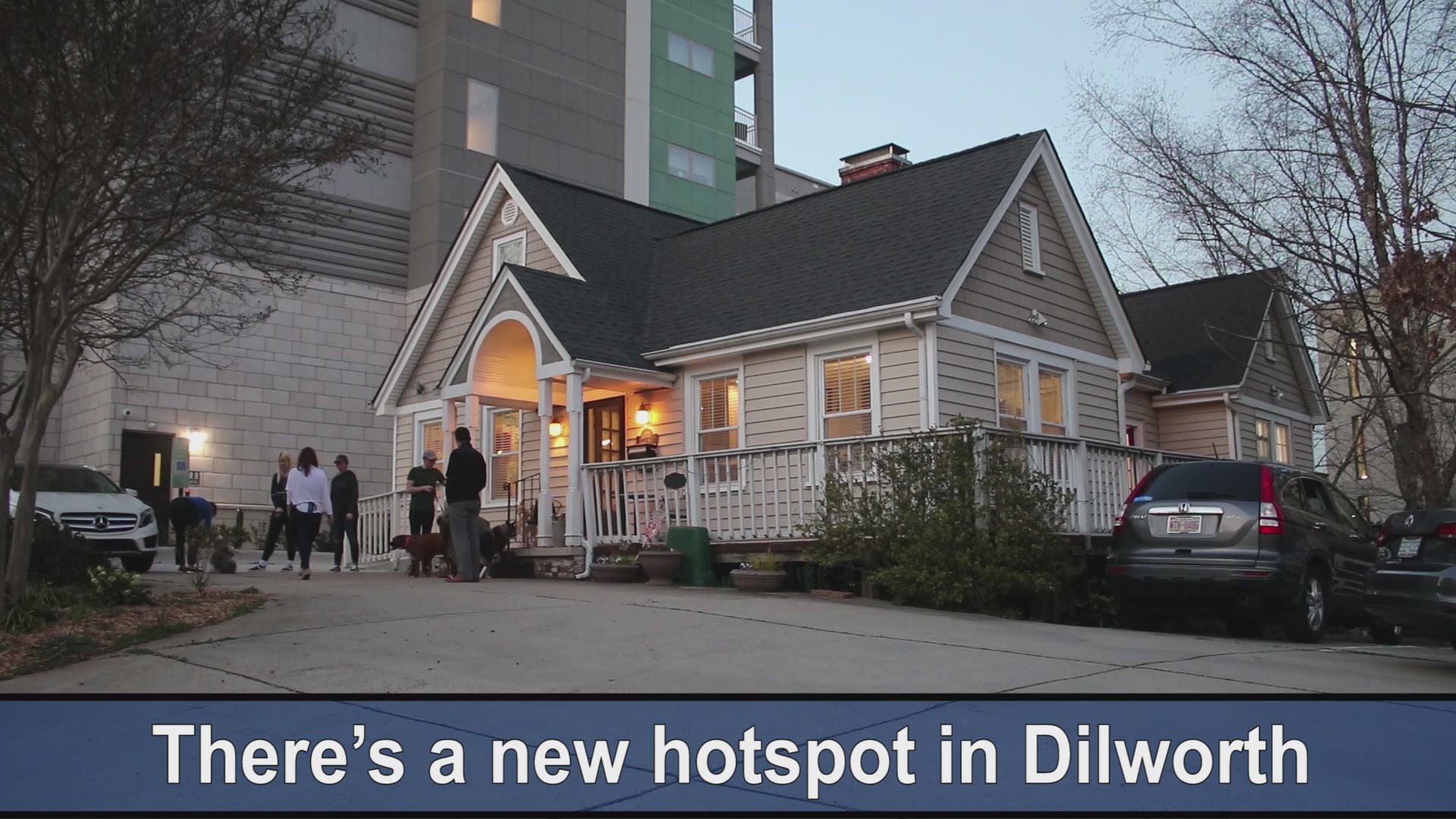 CHARLOTTE, N.C. — There’s a new hotspot in Dilworth, but you need four paws to get served.

Stylist Anne Lawing runs a side hustle out of Creations by Curt Hair Studio, where customers can belly up to the bar -- and get a belly rub, too.

The “Walk Up Bone Bar” is a popular hangout for canine clientele.

The ball got rolling back in August when Lawing started to spot people coming out of Greenside Apartments next door with their dogs.

“For the longest time, I’d run out (in the parking lot) and give the dogs a treat because I love dogs," she said. It also helped me meet a lot of people.”

But when the weather turned colder, Lawing didn’t get outside as much. Then, she had an idea.

“What if I just open the window and pass the bones out there?” she thought.

That was in January. A week later, one of her newfound friends presented Lawing with a sign for the “Walk Up Bone Bar”. That's how the neighbors know she's open for business.

“She turns her sign on whenever she is there so she can give out treats,” said Heidi Seymour.

Seymour and her boyfriend, Liam Torpey, come from uptown to visit the "bar" with their dog, Gramm. They are friends with Megan Pazdersky, whose dog, Charlie, is a regular customer.

Most of the pups live in the area and hightail it to the “Bone Bar” during Anne’s working hours -- Tuesday through Saturday.

“The dogs know the house now,” Seymour said. “She recently added stairs up to the window so little dogs can enjoy the treats also.”

Lawing said the project manager at Greenside helped her out with that endeavor. The pets can now peer in the window, even when she’s not there.

“Some of the dogs will come sit on the steps ‘cause they don’t understand why I’m not here on Sunday/Monday,” she explained.

To compensate, Lawing leaves treats in the mailbox on her days off, so the dogs don’t go home disappointed. She’s also left a box on the windowsill before with a sign that read “Self-Service”.

The “bar” is not just about giving a dog (or ten) a bone (or twenty). Lawing has made new friends, introduced them to one another, and even played matchmaker. She said it’s given them all a new way to connect.

“They get out and they walk their dogs, and they see the same people, but they’re not as apt to speak to each other when they’re just walking,” she said.

Lawing’s worked at the salon for a decade; it’s in a house that she said was built in the 1930s. In recent years, apartment buildings started popping up in the neighborhood. In fact, the salon was one of the few holdouts as properties were being bought up in the area.

“We really felt like we were being invaded. It was a really tough three years getting through the construction and all the noise and the dirt and all that. But we stuck it out,” Lawing said. 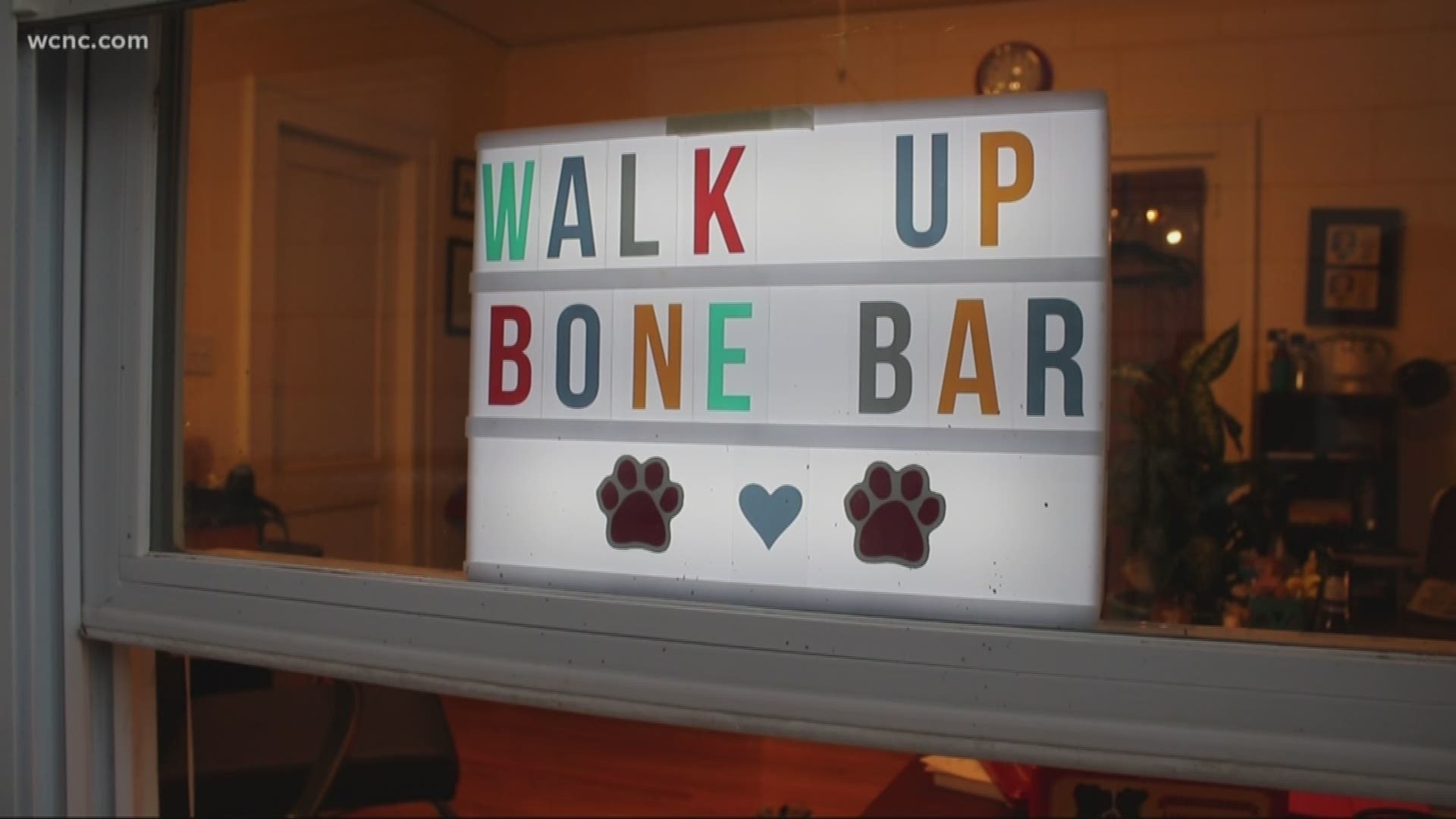 Her mood back then was quite different than the jovial soul seen nowadays.

“When they were building, it was just miserable,” Lawing said. “I used to hate when they were doing the construction. It was like, ‘Where am I going to park?’ and ‘How noisy is it going to be?’”

But meeting her new neighbors and creating the “Bone Bar” has changed her attitude.

“I love coming to work,” Lawing said. “There’s nothing better than a dog’s love.”

“She is the sweetest lady,” Seymour added. “A lot of people in Dilworth walking distance go to her.”

Still, sometimes Lawing gets carried away.

“I have had some parents calm me down, you know, there’s a couple of dogs, and they’re like, ‘You can only give them one bone,’ and that’s really hard for me to do,” she said. “I try to listen to the parents because I don’t want to lose any of my customers.”

Lawing has a pet of her own at home. She’s the proud dog mom of Pinky, a rescue.

“She’s the love of my life. I’m all about trying to rescue animals,” she said, adding that her last four pets were rescues.

“They’ve been blessings to me,” Lawing said. “There’s too many out there that need love. And I got it!” she laughed.

Lawing is drawn to pets as well as people, though she’d probably admit she knows more of the dogs by name than the owners. But now that the chaos of construction is over, and the friendships have been made, she’s come full circle.

“When I come to work, nine times out of ten, there’s a dog in the parking lot waiting on me,” Lawing said. “And that just makes me smile.”