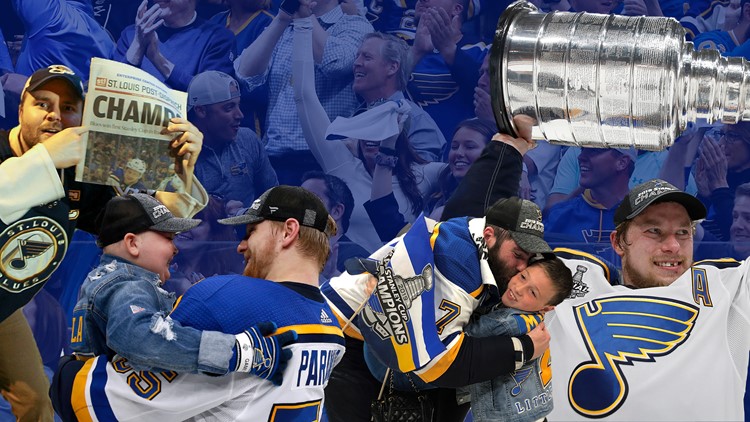 This Blues story is sports at its best

Think about your favorite thing about this Blues Stanley Cup.

Is it ending the half century wait? Is it the worst to first story of the season? Is it Jordan Binnington's rise from obscurity? Is it Laila Anderson stealing our hearts? Is it finally getting guys like Hull and Plager a St. Louis championship?

It's nearly impossible to pick just one.

This Blues story has brought St. Louis together like nothing else has before.

It's rare nowadays to find something everyone agrees on. We seem to be programmed now to find fault with just about everything. The Blues' run was something we could all get on board with.

For once, every person in the region was pulling on the same end of the rope, and now we've all been rewarded with a Stanley Cup.

RELATED: For the Blues, the party rages on at OB Clark's

RELATED: Game 7 was the most-watched NHL game on record

Every night on my 45 minute drive home from St. Louis over into Illinois, I've seen business after business shouting out the Blues.

Big Blues banners hang outside bars all over the area, hotels, churches and restaurants have changed the wording on their signs out front to "let's go blues", new billboards pop up almost every day and the airport reminds you what team's town you're in at almost every turn.

I've taken Uber and Lyft rides to and from the airport with drivers originally from Russia, India and Latin America, and they've talked my ear off about the Blues the entire way.

Enterprise Center was filled to the brim not just for home postseason games, but for watch parties while the team was on the road. They even got 25,000 people into Busch Stadium to watch Game 7 on the jumbotron.

There were probably close to 50,000 people in the streets of St. Louis during Stanley Cup games, with people just wanting a little taste of the excitement.

And it's not even just in the Midwest. A good chunk of the country also caught Blues fever.

The "Gloria" bar in Philly became one of the biggest stories of the season.

RELATED: The Philly bar that helped launch the 'Gloria' phenomenon is sending 33 people to the Blues Parade

Blues fans showed up and impressed at just about every single away game this postseason.

Heck, even a die-hard Blues fan from Denmark decided he couldn't miss out on the excitement and had to make it to St. Louis for the Stanley Cup Final.

Everyone was on board. Now everyone gets to party.

I think about the parade on Saturday. There will be people bringing their kids downtown to Market Street that maybe have never been able to actually go to a hockey game. But this story has hooked them all the same. It's history.

This Blues team has had something for everyone.

For the die-hards, it's 52 years of ups and downs all rolled into one roller coaster season.

For the casual fan, stories like Laila Anderson and even Barclay the team puppy were easy to latch on to.

For those interested in story lines, Jordan Binnington may have written one of the best we've ever seen.

Sports brings out our emotions and brings people together better than anything I've seen in life. I think subconsciously that's why we all love sports so much. They make us actually feel something.

Usually for Blues fans, that something is heartbreak.

But not this time. Not this year.

The St. Louis Blues are Stanley Cup Champions and it's time for the entire region to join in on the party.