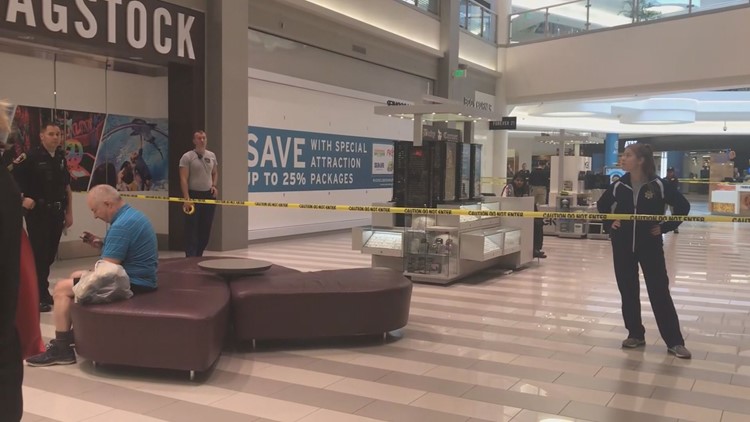 Photo by: KARE
Security personnel work the scene where a 5-year-old boy was tossed over a third story balcony.

A number of posts that have been shared thousands of times on social media claim that the child did not survive his injuries, and demand retribution against the man accused in this random crime.
Author: KARE Staff
Published: 1:33 PM CDT April 17, 2019
Updated: 2:01 PM CDT April 17, 2019

GOLDEN VALLEY, Minn. — Social media has been abuzz with facts, speculation and outright lies since a 5-year-old Twin Cities boy was thrown from a third floor balcony at the Mall of America.

An attorney for the child's family told reporters Tuesday that the boy remained in critical condition four days after the traumatic incident, and a GoFundMe site that has raised more than $750,000 for his medical care says the child known only as 'Landen' is dealing with broken bones and severe head trauma.

Yet a number of posts that have been shared thousands of times on different platforms claim that the child did not survive his injuries, and demand retribution against the man accused in this random crime. Many of those posts even spell the 5-year-old's name wrong.

Thousands of posts like this one claiming the boy thrown off a balcony at MOA has passed away have been shared or circulated on social media.
KARE

So what is the truth?

Landen's GoFundMe page, administrated by a family friend who is acting as their spokesman, addresses the matter directly saying the boy had a peaceful night of sleep Tuesday into Wednesday but that his condition remains much the same as in previous days. "Small steps towards the healing process," the site manager writes, making it very clear that Landen is still alive.

In an update on Landen's GoFundMe page, his family's spokesman makes it clear that the boy is alive, and that a picture being circulated on social media is not of Landen and his mom. a
GoFundMe

The writer also addresses a photo of a child in the hospital with his mother that has been shared, with claims it is Landen and his mom. "There is also a photo circulating around of a mother in a surgical mask next to a boy in his hospital bed. This is not a picture of Landen and his mother. We will not be releasing any photos during the recovery process."

Landen's situation and the misinformation being circulated about his condition underline how import it is to determine the legitimacy of a social post before sharing it with friends and contacts.

If you have any questions on the accuracy of a post you see on social media, you can contact us at verify@kare11.com or fill out the form below and we'll try to clear up the facts.

Child 'thrown' from third floor of Mall of America, suspect in custody