Which St. Louis celebrity is the biggest Blues fan? 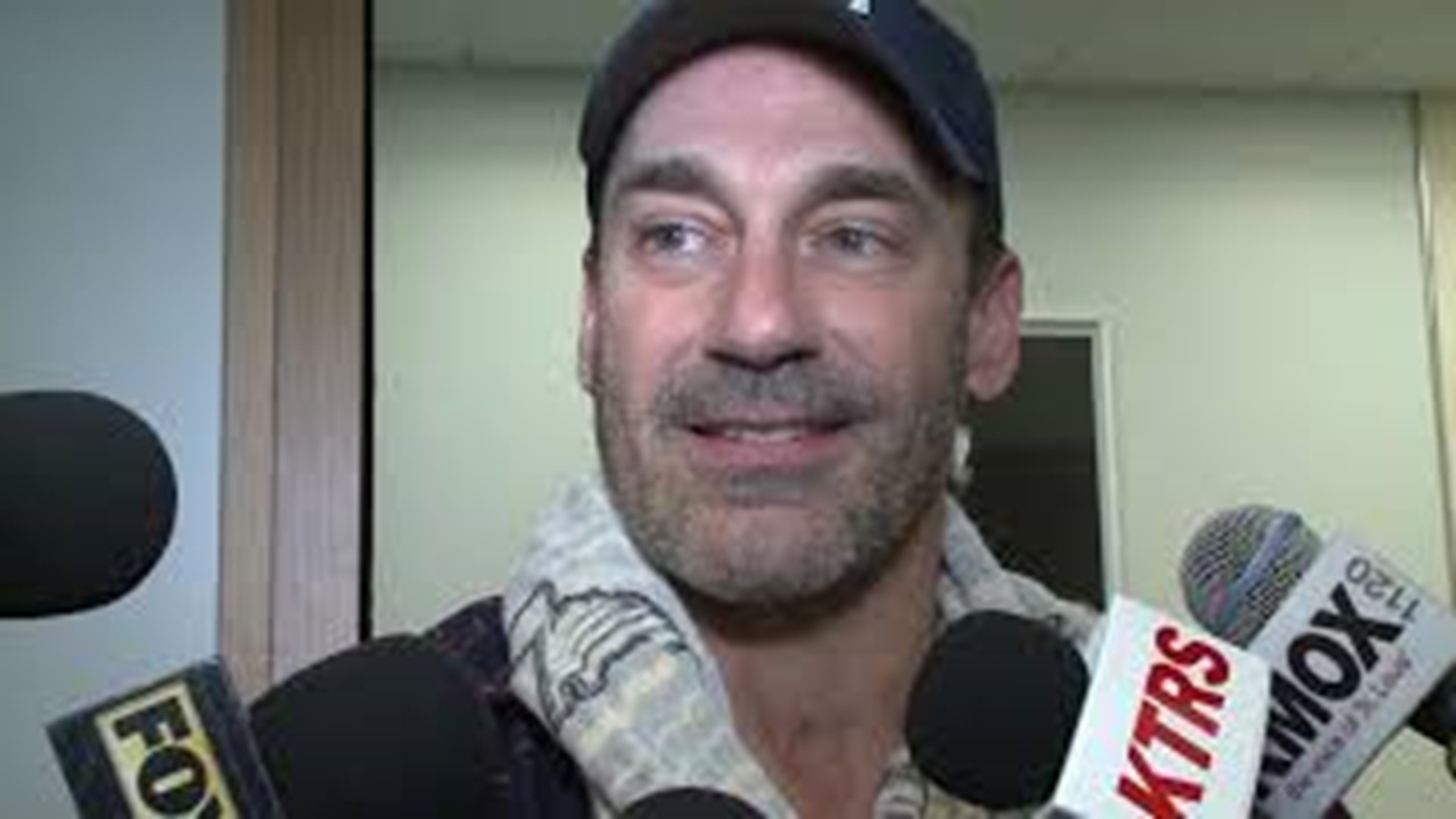 In my opinion, St. Louis is always at its best when we're supporting one of our own.

Whether it's a hometown kid making it big in Hollywood or pro sports, one of our local teams excelling on the big stage or even defending our unique food choices against the rest of the country, we always stick together.

During this Blues playoff run, support has come from a lot of places.

Did you ever in a million years think a Philadelphia bar would be the inspiration for this team's rallying cry?

Over the course of the 2019 playoffs many A-list celebrities and pro athletes have also stepped up to rep the Blues. Whether they're originally from St. Louis, or have just come to love it like a hometown, Blues fans can't get enough of the support from these famous faces.

So let's rank them by who bleeds the most blue.

My system for this ranking is pretty simple. Celebrity power multiplied by Blues fandom = higher ranking.

Laila Anderson has quickly vaulted to the top of most popular St. Louisans. The inspirational fan has captured the hearts of everyone who's heard her talk and has given the Blues another reason to strive for glory. Hopefully after all is said and done, Laila will be a nationwide superstar.

RELATED: ‘And to have you here was a little extra special for us,’ Laila interviews favorite Blues player Alexander Steen

RELATED: Laila Anderson, who's an inspiration to the Blues, attends Game 3 in first trip outside in 4 months

Lafayette grad, former Cardinal and current Yankee star Luke Voit is a big Blues fan. He's been shouting the team out on Twitter all season long.

Former St. Louis Ram Isaac Bruce hasn't forgotten about the city that made him a legend. "Reverend Ike" has been tireless in his charity efforts in St. Louis, and has been a big supporter of the Blues on Twitter during this run. He even said he'll be in attendance for Game 3 of the Stanley Cup Final.

John Burroughs grad and Dallas Cowboys star running back Ezekiel Elliott has had to tiptoe his way around his Blues fandom in recent years. Stars fans came after him in 2016 when he openly cheered for his hometown team on Twitter. So when he was spotted at a Blues/Stars playoff game in 2019, he decided to stay neutral.

Tony X (Anthony Holmes) famously "discovered" hockey and the Blues during a playoff game in 2016. Now, he's a Twitter superstar with 77 thousand followers and has been talking Blues on his timeline ever since.

Affton native John Goodman has made it known he supports his home town teams.

He even had his own bobblehead day back at Busch Stadium in 2016.

We know he'll be cheering for the Blues the rest of the way in 2019.

This has to be an interesting series for Jayson Tatum

The St. Louis native and Chaminade grad now plays for the Boston Celtics in the NBA who just happen to share a home arena with the Boston Bruins.

Tatum isn't shy about his love for St. Louis (he even got it tattooed on himself), and may have made a few Boston fans mad with this tweet after the Blues won the west.

I think a Tatum cameo at Enterprise Center later this series might be in order.

The love affair between Nelly and St. Louis will never die.

The rapper brought St. Louis to the rest of the world in the early 2000's, and never misses a chance to let people know where he's from.

He's been a long time supporter of all St. Louis teams, including the Blues, who he famously represented in his "Country Grammar" music video.

He's also shouted out the team a few times on his Instagram page this season.

The lyrics to "Midwest Swing" by he and the St. Lunatics really tell you all you need to know about Nelly...

"Representin' St. Louis every time I breathe in the city I touch down and I bob n' weave."

The host of "Watch What Happens Live" on Bravo is a well-noted St. Louis supporter.

The Clayton High School grad shouts out his home city every time he gets the chance, and he's embraced this Blues run to the Stanley Cup Final.

The Blues have shown a message from him chanting "Let's go Blues" multiple times during the playoffs to fire up the crowd.

He's also taken to his own social media to support his hometown team.

The St. Louis native and son of legendary Cardinals broadcaster Jack Buck has become a legend in his own right, calling NFL and MLB games for FOX.

He's always made it known how much he loves his hometown, whether it's defending them when the Rams left or stepping into the Fox Sports Midwest booth to call part of a game in 2013.

Buck said he'll be giving his tickets to another member of this list for Game 3 of the Stanley Cup Final, but plans on being in St. Louis for Game 4 and 6 (if necessary)

Right after Buck comes the guy who made the sportscaster's most famous call possible.

St. Louisans will literally applaud anything David Freese does (and with good reason).

The Cardinals hero may be out in Los Angeles now, but that doesn't mean he's stopped supporting the Blues.

He recorded a special message for the team's jumbotron that has played a few times this postseason.

Freese also got an assist with some Blues support from the organist at Dodgers stadium during the Western Conference Final against the Sharksm when he played Blues victory song, "Gloria" during a Freese at-bat.

Los Angeles fans and San Francisco-area fans are mortal enemies, so I guess the organist at Dodger Stadium subscribed to "the enemy of my enemy is my friend" theory to make this moment happen.

Native St. Louisan and star of "The Office" Jenna Fischer has been one of the most vocal social media supporters of the Blues during this playoff run.

Here's her latest post, where she names a "new" drink after Blues goalie Jordan Binnington.

She also had a back and forth on Twitter with former on-screen love affair John Krasinski, who's a Bruins fan.

The guy could've forgotten about his first professional home when he and the Rams both went their separate ways, but he hasn't.

Long never misses a chance to shout out St. Louis, and especially the Blues.

He live tweets most games (and was pretty pumped about Gunnarsson's OT goal), recorded an in-game message for the Enterprise Center where he clarified he was a former ST. LOUIS RAM and he'll be in attendance for Game 3 of the Stanley Cup Final.

Even as a retired former Ram, Chris cares more now about a St. Louis sports team than his former team's owner cared about the team he actually owned in St. Louis.

Oh yeah, those tickets I mentioned earlier that Joe Buck had to give away for Game 3? They're going to be used by Chris and his father, Pro Football Hall of Famer Howie Long.

Chris Long talks before Game 3 of the Stanley Cup Final

I imagine when Yadier Molina and Adam Wainwright retire they're just going to own private boxes at every Blues and Cardinals game and make nightly appearances on the big screens so fans can go berserk.

All of the Cardinals have supported this Blues run, but nobody gets the crowd fired up more than Yadi and Waino.

The two have been at every playoff game their schedule allows them to make it to, and they have been PUMPED.

They were at the Western Conference Final clincher as well, where Adam Wainwright recorded this video of the celebration.

Nobody gets the crowd fired up more than Adam Wainwright and Yadier Molina. And I mean nobody.

RELATED: The St. Louis Cardinals show the Blues some love during Game 7

RELATED: The Blues are moving on, and everyone is pumped

Ok, this was an easy number one.

Jon Hamm's love for the Blues is second to none.

The St. Louis native and Hollywood star has been a Blues fan his entire life, waiting for the Cup just like the rest of us.

His Blues love is well documented.

He cameo'd in the Blues' broadcast booth in March of this year, came back to St. Louis for the Winter Classic in 2017, talked Blues with "The Great One", shouted out his team on Jimmy Kimmel, hosted the NHL100 gala and of course stole the show after the Blues won the Western Conference Final against the Sharks.

Knowledge, passion and notoriety all combined into one.

He'll be at Game 3 of the Stanley Cup Final in St. Louis, and I'm sure we'll be treated to another class Hamm Blues moment.