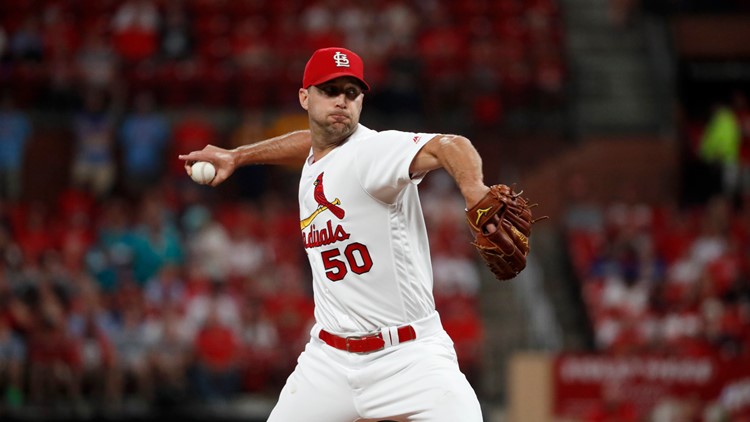 ST. LOUIS — Baseball is a humbling sport. It proves us wrong in so many ways, every single season.

Before the St. Louis Cardinals stepped foot on spring training soil, I held little hope for an Adam Wainwright revival in 2019. He was turning 38 years old this summer, hadn't been worth much in years, and barely finished the previous season.

He told the media in January that he had found a newfound health in the offseason. Your normal "best shape of my life" routine. Basically, what we all tell ourselves before we eat a plate full of barbecue and drown it in a few pints of beer. We had heard the same line from Wainwright in previous off-seasons, so it was harder to bite down this time, even if his conviction is hard to question.

He took an incentive-laden contract, with only two million dollars guaranteed. Imagine going from $19.5 million to $2 million. That's where Wainwright was.

Expectations were minimal heading into the season. Many weren't even sure Wainwright deserved a rotation spot, much less a roster spot for the duration of a season.

Well, he won his 12th game on Friday night at Busch Stadium. Since pitcher wins mean as much as the health content on a can of diet soda, let me feed you some other stats. Wainwright lowered his earned run average to 4.00 after his six scoreless innings against Milwaukee. He silenced a Brewers lineup that had been killing teams for two weeks.

The most impressive thing about Wainwright's 2019 season is the endurance. He's getting better instead of worse as the season gains traction. After a not-so-good July and rough August, Wainwright's September ERA in three starts is a filthy 0.45. Wainwright's second half ERA is 3.59. Instead of wearing down, he's revving up for the stretch run.

What's he doing differently? According to Brooks Baseball, Wainwright is throwing his curveball a lot more than he did in 2017, his last full season. The fastball and cutter are toned back a bit, and a refined breaking ball is the centerpiece of Wainwright's attack once again. He's getting whiffs on the curve and using the cutter more assuredly, thus making the fastball seem more surprising to hitters.

He's finally located those Anti-Father Time pills that Yadier Molina discovered years ago. That's the best part of this revival: seeing Wainwright and Molina play catch like it's 2014 all over again. It's especially bittersweet because you know the two are near the end and that the days of seeing them confound hitters will be no more. Thankfully, that day is still down the road.

Wainwright hasn't offered the Cardinals more than 1.0 WAR since 2014. This season, he's close to 2.0. If the playoffs started today, I'd throw #50 out there over Miles Mikolas. Who would have called that in February? The right answer is very few.

With Wainwright, I feel like fans are playing with house money with regards to his contributions-but I don't feel like 2019 should be the end.

With Michael Wacha hopefully drifting away this offseason and certain pitching arms still raw in the shoulders, bringing back Wainwright should at least be a consideration. There's not a lot of downside to the idea. I don't think he's suddenly going to break down and become useless again. Obviously, he's figured something out and is getting swings and misses from hitters again. That can't just stop.

Maybe I'm greedy and want to see Wainwright and Molina retire as Cardinals together, two old lions leaving the field at the same time. Brothers in arms, beginning and ending together. The performances are backing up this proposition. It's not like this is unheard of. Have I introduced you to Bartolo Colon, who put together a solid season with the New York Mets in 2016 at the age of 43?

It couldn't have happened to a better person either. Admit that you love it. Wainwright truly is the ultimate St. Louis Cardinal, so a comeback tale just fits like a broken in and trusted mitt.

Let's say Wainwright finishes the year in strong fashion and enjoys a solid postseason too if the team gets there. How can you not sign him to another contract? He knows one-year contracts are the way these days, so get it done. I mean, John Mozeliak has suggested worse contracts before.

While Austin Gomber and Ryan Helsley deserve long looks, Wainwright has something on both of them: experience and proven reliability.

The fact that I am even talking about a contract extension for Wainwright is just wild. Once again, the humbling sport known as baseball taking shape before our eyes.

Perhaps he was right in January. Perhaps we were all wrong.

Or maybe, just maybe, sports are impossible to predict.