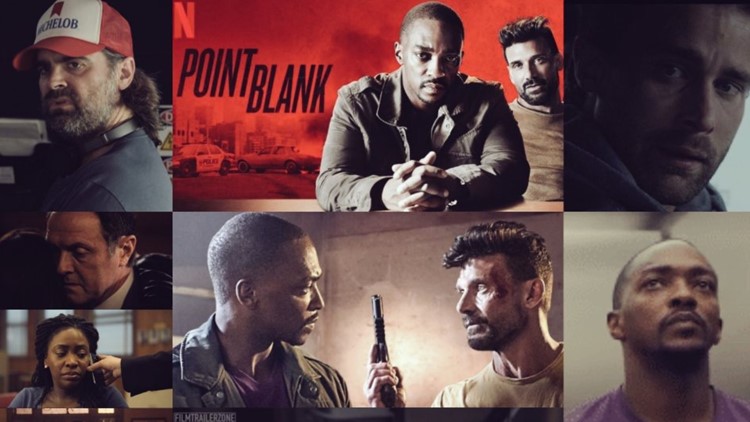 ST. LOUIS — Whatever happened to fun at the movies? Sitting down, pressing play, and enjoying a film without being told what to think and feel. What about a fun ride inside a tribute to old cinema?

That's what Joe Lynch's Point Blank, scripted by Adam G. Simon and produced by WarParty Films, gives you on Netflix.

There's a lot more where this film came from, and in order to lay out the big picture, allow me to present ten reasons for you to watch it.

Quick! Everybody turn on the Friedkin, put on your wardrobes, and wait for the money shot!

Quick plot: Paul (Anthony Mackie), a ER nurse, finds his life turned upside down when his pregnant wife is kidnapped, and he must break a criminal (Frank Grillo's Abe) out of the hospital. The unlikely duo finds themselves on the run from dirty cops in a day-long run in Cincinnati.

86 minutes. Think about that. If Michael Bay had a gun to his head, he couldn't make a film as short as that. Lynch and company don't waste a second of your time here. It starts, moves quick, and ends with a bang before you need a second bowl of popcorn.

If you combined James Dean and Sebastian Stan, you'd have Cooke. Mateo's (brother of Abe) menace was only matched by his emotion here, a man trying to make everyone happy without thinking about himself. A thief with a heart of sorrow and gold. It was a small performance, but one that struck a chord.

Midway through the film, the action picks up with Abe getting into a fight with a thug in a car wash. I am talking about an operating car wash with customers and soul music playing in the background. The relaxed tunes only make the hand to hand combat, a Grillo specialty, stand out.

So valuable on House of Cards (also on Netflix), McGiver plays Masterson, a respected detective trying to crack the case involving Abe, Mateo, and a dead criminal attorney. In a small role, this guy shined!

6) The smooth yet rocking soundtrack

Starting with Black Flag's "Rise Above," the film instantly asserts its punk rock flag in the ground. The car wash fight was tuned to Oran "Juice" Jones' "The Rain," while the film picks up its 1980's jazzy rhythm with Brutus' "Exitation." Don't forget about Sigue Sigue Sputnik's "Love Missile F1-11." If you couldn't think of it, but would dance to it, Point Blank has it. It's an eclectic collection.

Lynch and Simon wisely kept this secret for the entire promotional campaign, preferring to let audiences find out about Moore's master drug kingpin, who helps Abe and Paul execute a third act heist of sorts. From the William Friedkin adoration to the fast-moving dialogue to the funniest line of the year, Moore owned it like a pro. Watch out, Hollywood! BIG D IS HERE! That's a wrap, baby!

What happens when you have two guys who love film history and also happen to be hilarious dudes? This movie. Lynch and Simon pulled moves from the 1970's and pop culture from the modern age to conjure up this magic potion. It leaves you wanting more.

3) Marcia Gay Harden and the shotgun

You'll know the moment when the film reaches that point, but until then, just revel in the fact that an Oscar winner signed up for this fun house. Harden could have phoned it in, but instead she has a ball, showing a high number of flavors that will keep you guessing. It'll be scary, cool, and bad to the bone.

2) Wheelman fans will dig it for a certain reason

Let's just say there's a shared universe taking place. The appearance of Daniel R. Hill's Cheetah should tip viewers off that this film exists in the same world as Jeremy Rush's brilliant 2017 debut film. Grillo's Wheelman was in fact, named Abe. Here's hoping for a third slice of pie.

They were foes in the Marvel universe, but here, twist that resentment to a refined yet toned-down animosity as two completely different men forced to work together. Grillo's authenticity in these sort of roles lends him an instant pathos in dramatic scenes while Mackie's comic timing and versatility mixes perfectly with his co-star. You can tell they are real life friends by how well they chop each other down and build each other back up on screen. They are a great team.

You need to watch this film ... twice. The second time, you'll appreciate the flow and rhythm of the action and also register all the laughs that may have been missed the first time. Consider this one of Netflix's finer achievements.

It's just a fun ride.