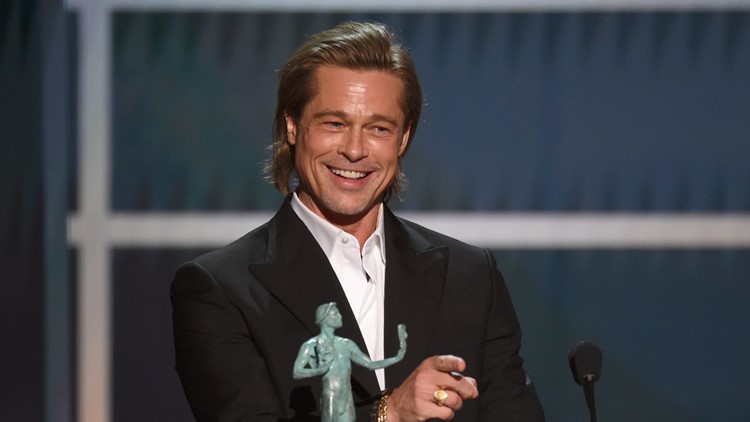 Photo by: Chris Pizzello/Invision/AP
Brad Pitt accepts the award for outstanding performance by a male actor in a supporting role for "Once Upon a Time in Hollywood" at the 26th annual Screen Actors Guild Awards at the Shrine Auditorium & Expo Hall on Sunday, Jan. 19, 2020, in Los Angeles. (Photo/Chris Pizzello)

If Ricky Gervais got one thing right at the Golden Globes, it was the fact that award winners need to clean up their act when it comes to their speeches.

Stop spreading your political wildfires across the audience and viewing crowds all over the world. Unless you're running for office or making a direct impact, leave the non-movie stuff to the events that don't revolve around the film for which you won.

Thank the crew, your fellow nominees, the voting body, or maybe your gardener for spraying fresh water on your face to get you up the morning after that all-nighter on set.

Or, just do what Brad Pitt has done over the past month at various awards shows. Let's recap the good stuff.

At The Golden Globes, Pitt thanked his fellow nominees while praising his cast and also spreading basic goodwill before he left the stage. "If you see a chance to be kind tomorrow, take it." Pitt also mixed in some good humor, joking that he would have made room on the raft for his fellow "Once Upon a Time ... in Hollywood" nominee, and "Titanic" casualty, Leonardo DiCaprio.

It was casual, easy-going and honest. No politics at all. Is that too hard to pull off?

At the National Board of Review last week, Pitt got personal when he won the Best Supporting Actor award. After tossing out the usual thanks and light jokes, Pitt gave a sincere hat tip to presenter Bradley Cooper for not only running over to the building after putting his daughter down for bed to give out the award, but for helping him get sober. It was the first time anyone had heard of this, and that made it even more raw and powerful. An introspective offering instead of a cry out for the rain forests in Asia? Thank goodness.

This past weekend at the Screen Actors Guild awards, Pitt offered comedy, poking extra fun at himself in the process. After thanking DiCaprio and company, he went in-depth about something everybody in Hollywood knows but few have the guts to joke about publicly: "Once Upon a Time" director Quentin Tarantino's fascination with women's feet. Pitt thanked Margot Robbie, Robbie's feet, Margaret Qualley's feet, and even Dakota Fanning's feet. He joked about Tarantino separating more women from their feet than the TSA. And then he dropped the biggest bomb on himself.

"It was a difficult part. The guy who gets high, takes his shirt off, and doesn't get on with his wife," Pitt said on stage in front of his peers ... and ex-wife, Jennifer Aniston.

The quote got the biggest laugh of the night from the entire crowd, including Tom Hanks, Jennifer Lopez and John Lithgow. It was a nice, long laugh that Pitt soaked in before talking about the level of skill, heart, and openness required by an actor to be good at their profession.

It was perfect, like Pitt's portrayal of veteran stunt man Cliff Booth in Tarantino's film. A performance so effortless and elegant that you could tell the Springfield native put some of his own life into the part. It was a great role in the midst of a storied career that has included star-power hits, weighted acting and a mixture of both. A performer at peace with his trade and his personal life.

There were no extended speeches about Donald Trump, the future of the world, or the water crisis wherever. All of those are dire areas of need that require attention, but they don't need to take place or soak up time on awards night. Keep the noise about the movies, the make-believe and magic created in the world of film. Poke fun at it all too.

So, please Oscar winners, do what Brad Pitt did. Follow his speech-giving method.