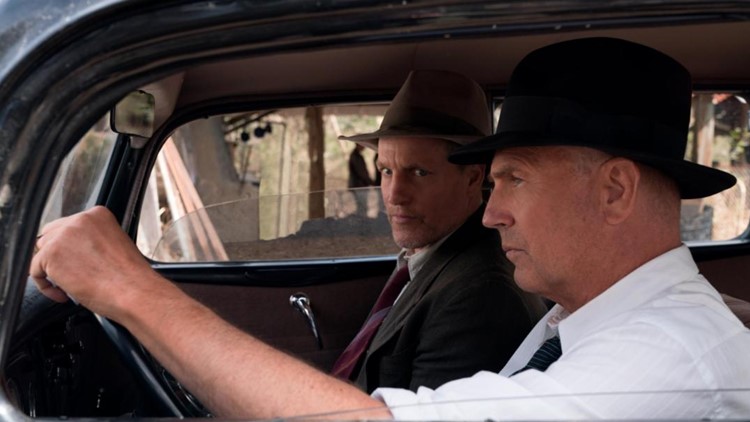 Frank Hamer (Kevin Costner) was one of a kind.

A legendary Texas Ranger (the one that wore a badge, not a baseball player) who could hunt down the deadliest and most elusive killers and criminals in the world. If the bad guys could bleed, Hamer was the bloodhound who would sniff them out eventually.

As Lee Simmons (John Carroll Lynch) tells Ma Ferguson (Kathy Bates) early on in Netflix's The Highwaymen, he was the only one who could catch Bonnie (Edward Bossert) and Clyde (Emily Brobst), aka "put them on the spot."

John Lee Hancock's movie is a rousing and deliberately slow-burning tribute to the men who brought the Bonnie and Clyde tyranny and media freak show to an end back in 1934.

The Warren Beatty and Faye Dunaway film may have romanticized their killing spree, but it left the lawmen who turned off their clock in the dark, or belittled their existence with buffoonery.

Credit Hancock and screenwriter John Fusco for keeping the attention of the tale on Hamer, Gault, and the rest of the lawmen who helped them track down the devious pair.

Outside of one close-up on Bonnie and a fateful shot during the film's climax, the camera produces mostly wide shots of the criminals in this film. It's not their movie, so the focus is rightfully kept on Hamer and Gault's journey.

If you are expecting a fast-moving action adventure, rethink that notion. Hancock's films burns slowly over its 132 minute running time, stopping long enough for the two men to wrestle with their past mistakes, kills, and inner demons.

Hamer was the gruff, stern gunslinger who hid his emotions while Gault wore it on his sleeve, and the actors are perfectly suited to each role.

There have been a few critics who say the actors rely on old tricks and play familiar roles, they treat that as a bad thing. In a film that aims to pay respect to these men, you wanted to get the right actor who could strike the right chord onscreen. There's no reason to explore gimmicks, play against type, and try to reinvent the wheel here. Costner was the perfect choice to play Hamer, and the same applies to Harrelson. You believe everything they say and do here, which lends the film an elite credibility.

Thomas Newman's score is terrific, borrowing some sounds from his Road to Perdition soundtrack, and truly transporting the viewer into this world of outlaws and lawmen. The action sequences are startling and technically efficient, with every bullet from a Tommy Gun and shotgun being felt at home. The production and costume design give the film an authentic 1930's look.

While Lynch and Bates are good in their small roles, Kim Dickens leaves a mark on you playing Hamer's lovely wife, Gladys. She's only in the film for a few scenes, but nails every moment with Costner, playing a woman who signed a contract in her mind when marrying an esteemed gunman. There isn't a false note in the performances here.

Costner simply gets better with age.

He's played versions of Hamer before, but the last 10-15 years have given his presence on screen extra poignancy. He digs into the agony that Hamer quietly battled without overdoing it or chewing up scenery. In a scene where Hamer tries to extract information from a reluctant gas station clerk, Costner shines like he hasn't in years. It's a great performance.

Harrelson is an underrated actor, and will probably retire that way.

He owns an Oscar nomination for playing Larry Flynt over 20 years ago, but has slipped into the skin of so many different characters over the years. Look at his work in Out of The Furnace, Zombieland, Now You See Me, Wilson, and The Hunger Games. Harrelson's Gault has a few things in common with his True Detective character, Marty Hart, playing the straight man to his partner's unconventional method practitioner. He's able to perfect comedic moments while emoting dramatic notes without a hitch. Always a watchable presence.

The Highwaymen is one of Netflix's best films yet, because it tells a worthy tale in entertaining fashion.

There's no Hollywood hijinks here. No filler. Just a slow-boiling tale about wolves catching wolves with some great moments. While there's a cinematic element to the film, there's also a reluctant gesture to not trip over history from Hancock.

Don't expect it to Roma the competition next year at the Oscars, but I'd bet good cash that The Highwaymen is easier on the eyes and should hold up quite well over the years. Give it a look.