Luck, who was on the sideline showing support for his teammates on Saturday night, was booed coming off the field after fans read the news on social media. 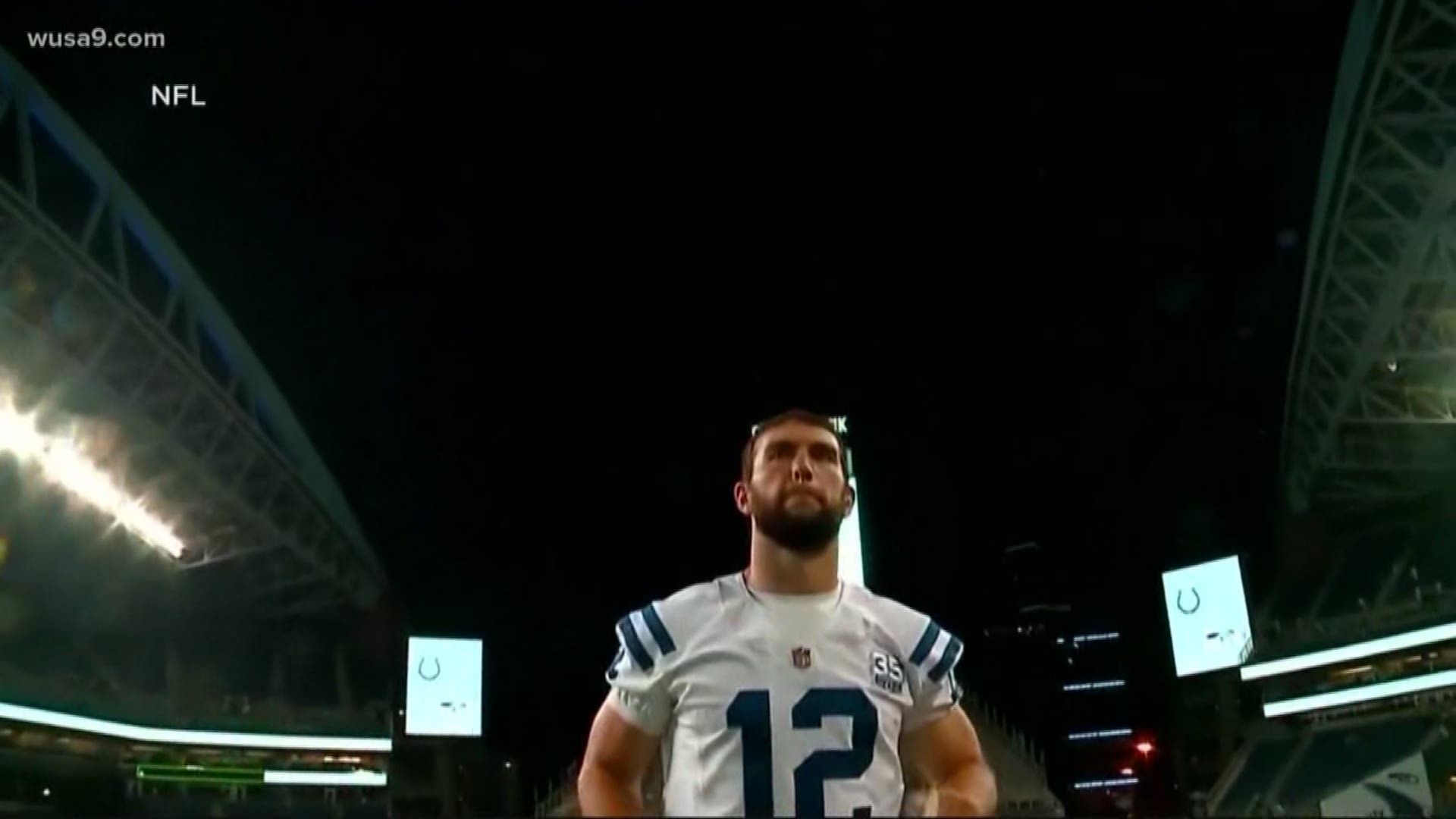 ST. LOUIS — There’s an old saying that goes, What you think of me is none of my business.

In other words, you do you and don’t pay any attention to what others may say or do.

Yet how can anyone not be affected by criticism like the kind retired Indianapolis quarterback Andrew Luck was subjected to on Saturday night?

Let’s unpack this point by point. Word leaked out that Luck, the oft-injured passer who is dealing with yet another injury and was questionable to start the season, was tired of it all and was going to announce his retirement on Sunday.

Luck, who was on the sideline showing support for his teammates in their preseason game on Saturday night, was booed coming off the field after fans read the news on social media.

That was followed by a hastily called news conference where he tearfully announced his decision.

And then, let the bashing begin. Here are a couple of the most prominent ones.

And then nearly as quickly came Luck’s defenders.  Former quarterback Troy Aikman was the loudest.

So, the latest is that the Colts are letting Luck keep the $24.8 million in bonus money that he would have had to forfeit for not fulfilling his contract. Darren Rovell of ESPN suggest that Luck is losing out on another $58.1 million by walking away. Perhaps the Colts are being so generous in the hopes that Luck may have a change of heart, like Michael Jordan once did, and want to come back.

The conspiracy theorists are flooding social media: Luck knew he was going to retire in the spring but the Colts asked him to keep quiet so they could reap all the season ticket money they could get; obviously, more with Luck as the quarterback of a team on the rise. That would likely be the reason for the boos that rained down from the rafters of Lucas Oil Stadium on Saturday night. Then there are the fantasy football owners who picked Luck in their drafts or kept him in dynasty leagues.

A quick aside:  The guy in our league that drafted Luck on Saturday morning picked Houston’s Lamar Miller in the next round; Miller tore his ACL about an hour before Luck’s news was leaked and he’s out for the year, too. My friend’s response in a group text? “Hey if anyone have has a player they don’t like trade em to me. Apparently I’m kryptonite.”  Boy, does that suck for him but at least he has perspective.

So now back to reality.  I agree with Aikman and the others that say that it’s Luck’s life, and his decision to do what’s best for him.  Period.

Okay, so the Colts might not be as good with Jacoby Brissett at quarterback.  So what?

So your fantasy team might not be as good as if you had Luck?  Get over it.

So what if Luck isn’t as tough as you think he should be to fight through injuries?  What difference does that make?

So what if Luck is “ish” in your eyes, like Dan Dakich? (Let the record show that I appreciate his candor always and his takes usually.  Just not this one.) Go back to paragraph one above.  It’s also not the first time I’ve shaken my head at a stupid comment Doug Gottlieb has made.  Maybe he should think before typing and hitting “Send” – now that’s the most millennial thing ever.

Or maybe it’s just that belief that it’s all about me, and I’m entitled to what’s mines.

Let’s go down through the litany of what Andrew Luck has dealt with since coming to the NFL seven years ago, courtesy of The Athletic’s Zak Keefer:

Granted, there are servicemen and women and first responders who will rehab through injury and loss of limb(s) every day for the rest of their lives and think nothing of it.

There are athletes, and I’ll use Steelers linebacker Ryan Shazier as just one of many examples, along with countless more not in the spotlight who continue to fight to improve their quality of life after catastrophic injury and don’t stop for any reason at all.

Does that mean Andrew Luck is any less tough for not wanting to continue grinding through rehab to get back on a field so he can be injured again? I don’t think so. And without talking to him personally I can’t possibly know what is going through his mind.

Again, it’s his life. Only he can know what he has dealt with and wants to deal with further. Only he can define quality of life for himself.

As for theories that he and the Colts duped their season ticket holders, that’s all they are now: theories.

Refresh my memory, but I don’t recall angry push back and refund demands when Jordan quit the Chicago Bulls right before the NBA season began in 1993.  Certainly not to this extent.  And the Bulls were coming off three straight titles with no end in sight.

Look, I get it – those tickets are expensive and no one wants to see a bad football team.  Deciding you don’t want the NFL experience is just as much your right as it is Andrew Luck’s to continue playing.

I had a teacher in junior high who had a quick comeback to anyone complaining about the grade any of his students had received.  “I talked to the principal today,” he would say, “and he assures me there will be eighth grade next year.” It’s your choice to be tougher and better.  So, for you Colts fans there will be NFL football this year, and the next. And your Colts team may not be as good as if a healthy Luck was behind center, but they will be competitive; they’re in a division that is mediocre enough that they could pull off a stunner and make the playoffs.

I live in a city where the same can not be said.  Stan Kroenke and his exit strategy to L.A.?  Now that’s a false business practice and duplicity of the highest order.

But back to the real crux of the matter.  Buying season tickets is a personal decision.  What’s the financial burden on my family’s ecomony?  Am I damaging my quality of life by giving up this money, because winning seasons and Super Bowls are not promised?

Is it worth it?

Why not let Luck make his decision for himself?

RELATED: Carpenter snaps out of slump as Cards sweep Rockies, 11-4