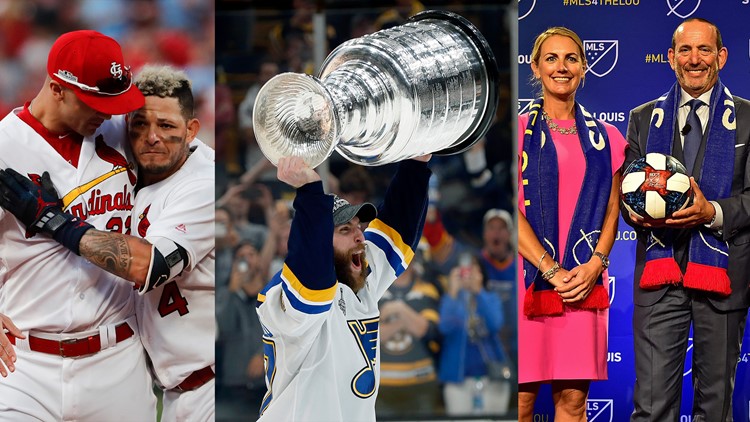 Listen. I know it's not the NFL, but why not? Let's give the BattleHawks a chance. St. Louis seems to have embraced their new team and league more than any other XFL city. Let's have some fun with this in 2020.

9: Travis Ford is building an exciting program at SLU

Yeah, there are some growing pains for sure, but SLU was fun last year, they're fun this year and they're probably going to be even better and more fun next year.

Travis Ford looks to be building something with the Billikens, and there are local recruits at the heart of it.

Maybe they can give us some more of that brief March magic they showed off in 2019.

The Cardinals' ace has arrived.

Every Jack Flaherty start in the second half of 2019 was must-see TV. He was the best pitcher in baseball for about three months, and with his drive and motivation you know he wants to stay there.

We might be seeing a special career unfold before our eyes, and 2019 could be just the tip of the iceberg to what this kid can do.

RELATED: Jack Flaherty is a big fan of Heath Ledger's Joker, and it makes for great Twitter

How nice is it to know both professional teams are set when it comes to the men running the show on the field?

Mike Shilt got the Cardinals back on top of the NL Central and was just named NL Manager of the Year, and after changing the entire persona of the Blues and winning the franchise's first ever Stanley Cup, Berube has his team looking great once again.

There is so much high school talent in St. Louis, and the rest of the country is starting to take notice.

It's not just an Ezekiel Elliott or Jayson Tatum coming out of the woodwork every once in a while, some of the best talent in the country is consistently coming from St. Louis. Schools like Lutheran North, Trinity, Belleville West, Chaminade, East St. Louis and more are producing kids that will end up playing at high level colleges and maybe even in the pros at a more frequent rate than ever.

Just stop into any gym or field in St. Louis or the metro east on a given Friday night and you could see a future superstar at work.

5: Stan Kroenke and the NFL could owe St. Louis some money for leaving with the Rams

The lawsuits against the Rams are progressing, and it's looking like St. Louis could come away with some serious cash from Stan Kroenke and the NFL.

If you don't want to look at this as "Rams bashing" just look at it as being thankful St. Louis might be able to get something back after the depressing departure of our team.

RELATED: Cusumano: 'A Reunion of the Greatest Show on Turf in LA? Give me a break'

We've had a good 15 year run with these guys.

Yadi and Waino are St. Louis legends, and the fact they're still performing at the level they are is amazing.

Wainwright is back for what will likely be a final hurrah in 2020, and Molina's contract is up at the end of next season as well. (Although it's possible Yadi is set on playing past 2020)

Let's enjoy these guys while we still have both of them together in uniform. How thankful are we for all the memories they've already given us?

Unknown minor league goalie to Stanley Cup champion and St. Louis legend in the span of six months. What a story.

Kurt Warner is about the only thing close to the story Jordan Binnington gave us this year.

2: The MLS is officially coming to town

St. Louis had been waiting for an MLS team for a long time, and all that waiting finally paid off in 2019.

This town can be thankful for a local, committed ownership group that made it happen. It's only going to get more exciting as the stadium starts to rise and the team gets assembled.