5 On Your Side Countdown | The 10 most colorful characters in St. Louis sports history

St. Louis sports have had their fair share of characters. But who stands out from the rest? Here's our countdown. Do you agree? 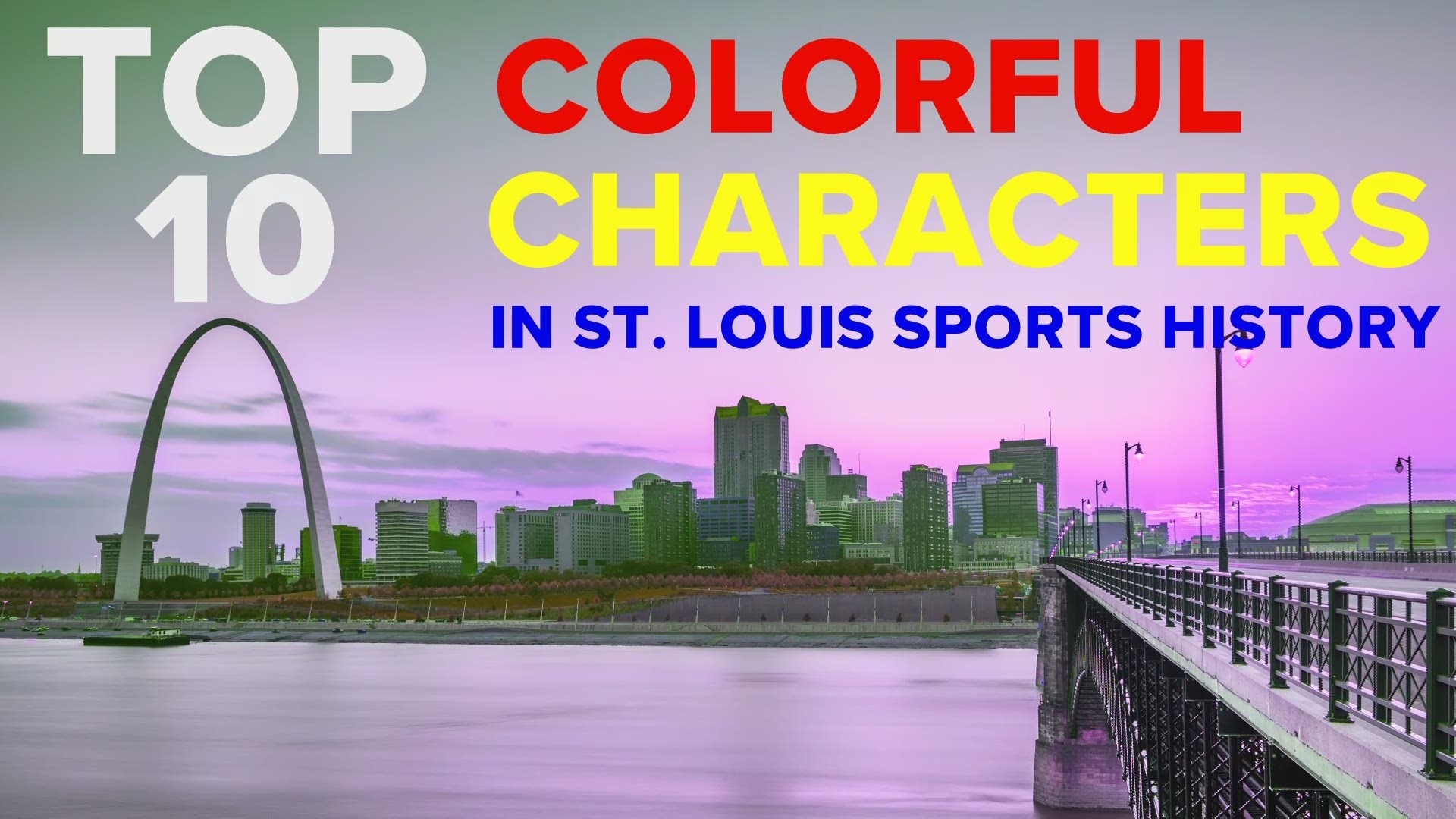 ST. LOUIS — We've been doing some series rankings at 5 On Your Side this summer.

Now, 5 On Your Side sports director Frank Cusumano takes a look at the top 10 most colorful characters in St. Louis sports history.

There's no shortage of memorable characters to choose from for this week's list. Here's our picks. Do you agree?

One of the most famous players in baseball history may have only been in St. Louis for three seasons with the Browns, but he left his mark.

He would often tell his infielders to sit down behind him, because he was going to strike the side. He had the famous "hesitation pitch" where he would almost stop his delivery.

Credit: ASSOCIATED PRESS
Satchel Paige, veteran Browns relief pitcher, is seated in an easy chair in the bullpen during the Yankee - Browns game at Sportsman's park, June 24, 1952 in St. Louis, Mo. The chair was placed in the bullpen for the ageless "Satch" to relax in, while waiting for those moments of great emergency when he is called upon to pitch. (AP Photo)

He was the last National Leaguer to win 30 games, but he's just as well known for his entertaining style in the mound and in the broadcast booth.

Dean coined the phrase, "It ain't bragging if you can do it."

As a broadcaster Dean butchered the English language, but the audience loved him anyways and he did games for 25 years.

Once an English teacher told him to stop using the word "ain't" on air. Dean responded by saying, "A lot of people who ain't saying ain't, ain't eating. So teach, you learn 'em English and I'll learn 'em baseball."

He was one of the most knowledgeable basketball minds in history, and also one of the game's great characters.

Majerus lived at the Chase Park Plaza, and legend has it that he once went to a movie there in his bathrobe.

He would diagram plays on the bathroom door and on napkins at restaurants.

Aside from the court, Majerus' second home was the restaurant.

After going for Ted Drewes for the first time and in a car on the way back to SLU, Majerus told he driver, "Can we turn around and go back? I want seconds."

Credit: ASSOCIATED PRESS
Saint Louis University basketball coach Rick Majerus poses for a photo with a statue of a Billiken, the school's mascot, on the SLU campus Tuesday, Oct. 30, 2007, in St. Louis. After three years in a TV studio, Majerus is back to coaching, what he knows and loves best. (AP Photo/Jeff Roberson)

One of the great coaches in SLU history was also a great characters.

The mock turtlenecks weren't just a fashion choice, they showed his approach to life.

The "Mayor of the Central West End" enjoyed a drink or two after a game, and after Jack Buck was one of the great after dinner speakers in our town.

How many offensive guards have ever made the cover of Sports Illustrated?

The "Dirtiest Player in Pro Football" was a 3-time Pro Bowler who did everything to protect his quarterback Jim Hart with the Big Red football Cardinals. That included leg-whipping, biting and spitting.

Being the villain isn't something everyone can embrace. But you better believe Dobler did.

Credit: AP
Conrad Dobler,left, of the St. Louis Cardinals, tries to block a charging George Martin of the New York Giants during the fourth period of the game at Giants Stadium, Dec. 5, 1977. Martin was trying to sack Jim Hart, the Cards' quarterback, and while Dobler stopped Martin, he received a 15-yard penalty for "illegal use of the hands." (AP Photo/Ray Stubblebine)

A legitimate St. Louis legend, and one of our town's enduring characters.

From his days as one of St. Louis' all-time great high school athletes, to helping the Cardinals on the field and eventually a long career in the broadcast booth, Shannon has become a part of the fabric of the city.

Early in his broadcasting career, Jack Buck asked Shannon to get the umpires before the game. He meant the names on a piece of paper. Shannon went down and brought the umpires to the broadcast booth.

His catchphrases of "Get up, baby", "A cold frosty one" and "Big boy" are part of the St. Louis nomenclature.

Credit: AP
Mike Shannon, a member of the St. Louis Cardinals' 1967 World Series championship team, takes part in a ceremony honoring the 50th anniversary of the victory before the start of a baseball game between the St. Louis Cardinals and the Boston Red Sox Wednesday, May 17, 2017, in St. Louis. (AP Photo/Jeff Roberson)

He's the only person who's been with the Blues since their inception into the league.

In the famous fight in 1972 in Philadelphia, Plager went into the stands to take on hostile Flyers fans. He hid in the restroom after the game to avoid getting arrested.

The sideburns, the hip checks, the fights and all that fun after games... Plager was an original Blue and an original character.

Andujar was a good and sometimes great pitcher for the Cardinals in the 1980's, but he'll always be more known for his classic quotes and antics.

"There are only two power hitters on this team, me and Jack Clark," Andujar once said.

"You can sum up baseball in one word... you never know," was another Andujar classic.

And who could forget Andujar's meltdown getting thrown out of Game 7 of the 1985 World Series.

Credit: AP
Pitcher Joaquin Andujar of the St. Louis Cardinals, is restrained by his teammates after being ejected from Game 7 of the World Series against the Kansas City Royals in Kansas City, Mo., Oct. 27, 1985. Andujar twice charged home plate umpire Don Denkinger in the fifth inning, accusing him of making bad calls. (AP Photo/Cliff Schiappa)

Possibly the best and zaniest promoter in baseball history.

Veeck once owned the Browns among other teams, and had more than his fair share of memorable moments.

He added a clown to the team in Cleveland. He cut holes in his wooden leg and used them as ashtrays. He brought in 3 foot, 7 inch Eddie Gaedel to pinch-hit for the Browns. And of course, Veeck was the mastermind behind "Disco Demolition" night in Chicago that started a riot on the field.

Bill Veeck was one of a kind.

Credit: ASSOCIATED PRESS
St. Louis Browns pitcher Ned Garver presents a silver trophy on behalf of his teammates to Bill Veeck, center, Browns' president, in dressing room at Fenway Park, Boston, Ma., a few hours after Veeck fired Rogers Hornsby as manager of the club. The trophy bears the inscription, "To Bill Veeck for the greatest play since the Emancipation Proclamation. June 10, 1952. From the Players of the St. Louis Browns." (AP Photo)

The star for the ABA's Spirits of St. Louis was one of the best players, and most unique personalities in the sport.

He would drive around St. Louis often in his Rolls Royce, and once even offered a chauffeur job to a young broadcaster named Bob Costas.

Barnes once missed a team flight to Norfold, Virginia and chartered his own plane. He showed up to the game wearing a mink coat with his uniform on underneath, with a woman on each arm and was holding a bag of McDonalds burgers. He opened up the coat and said, "Game time is on time." He then proceeded to score 43 points and grab 19 rebounds.

Marvin Barnes was the most colorful character in St. Louis sports history.

Credit: AP
Spirits of St. Louis Marvin Barnes (24) brings the ball in low as he tries to get away a shot under New York Nets Larry Kenon (35) during the first period of play in the ABA Eastern Division playoffs in St. Louis on April 11, 1975. Barnes did get the shot away and racked up two points for the underdog Spirits. Nets Billy Paults (5) watches the action. (AP Photo/Fred Waters)