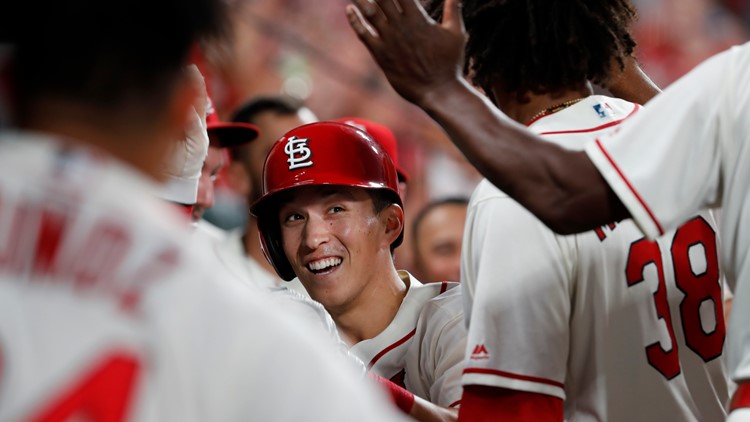 Photo by: AP
St. Louis Cardinals' Tommy Edman is congratulated by teammates after hitting a double then scoring on a throwing error by Pittsburgh Pirates shortstop Kevin Newman during the sixth inning of a baseball game Saturday, Aug. 10, 2019, in St. Louis. (AP Photo/Jeff Roberson)

ST. LOUIS -- As long as the Cardinals play the Pirates, things seem to work out pretty well.

The Cardinals defeated the Pirates for the seventh consecutive time and eighth in their last nine meetings on Saturday night as Adam Wainwright continued to dominate at Busch Stadium.

After giving up a leadoff homer, Wainwright shut out the Pirates through the sixth inning and a two-run rally in the bottom of the inning gave him the victory.

The win, combined with the Reds’ second consecutive win over the Cubs, left the Cardinals just two games behind division-leading Chicago in the NL Central.

Here’s how the game broke down:

At the plate: The Cardinals tied the game in the bottom of the first when, just like Friday night, they loaded the bases with nobody out before Marcell Ozuna grounded into a double play … The game stayed tied at 1 until the sixth. Tommy Edman doubled and came around to score on a throwing error on the play to put the Cardinals up 2-1 before they added an insurance run. Paul Goldschmidt singled, went to third on a double by Ozuna and scored on a single by Paul DeJong.

On the mound: This was the second time this season Wainwright has allowed a leadoff homer to the Pirates’ Adam Frazier … The Pirates did not score after that as Wainwright allowed five more hits, walked two and struck out eight … In his six starts at Busch Stadium since June 2, Wainwright has allowed a combined seven runs in 38 2/3 innings, an ERA of 1.63. Wainwright is 3-1 in those six starts with two no-decisions … Giovanny Gallegos retired all seven batters he faced, lowering his ERA for the season to 1.96, before Carlos Martinez recorded the final two outs to earn his 12th save.

Key stat: Since the All-Star break, the Cardinals have gone 8-1 against the Pirates and a combined 8-11 against their other opponents.

Worth noting: The Cardinals did not commit an error for the eighth consecutive game, their longest errorless streak since a 10-game streak in 2017 … Frazier is the third player with two career leadoff homers at Busch 3 since it opened in 2006. The others to hit two leadoff homers were Rickie Weeks, both in 2010, and Dexter Fowler, when he was with the Cubs … Overall there have been 19 leadoff homers in stadium history, three this season … Yadier Molina had a sacrifice fly and was hit by a pitch in his rehab game in Springfield on Saturday night. He is expected to play there again on Sunday night before rejoining the Cardinals on Tuesday night in Kansas City.

Looking ahead: Miles Mikolas will get the start on Sunday as the Cardinals try to complete a series sweep over the Pirates.