Blues and Jets set for last match up of the season

The Blues will try to extend their home point streak to 12 games; they're 10-0-1 their past 11 at Enterprise Center. 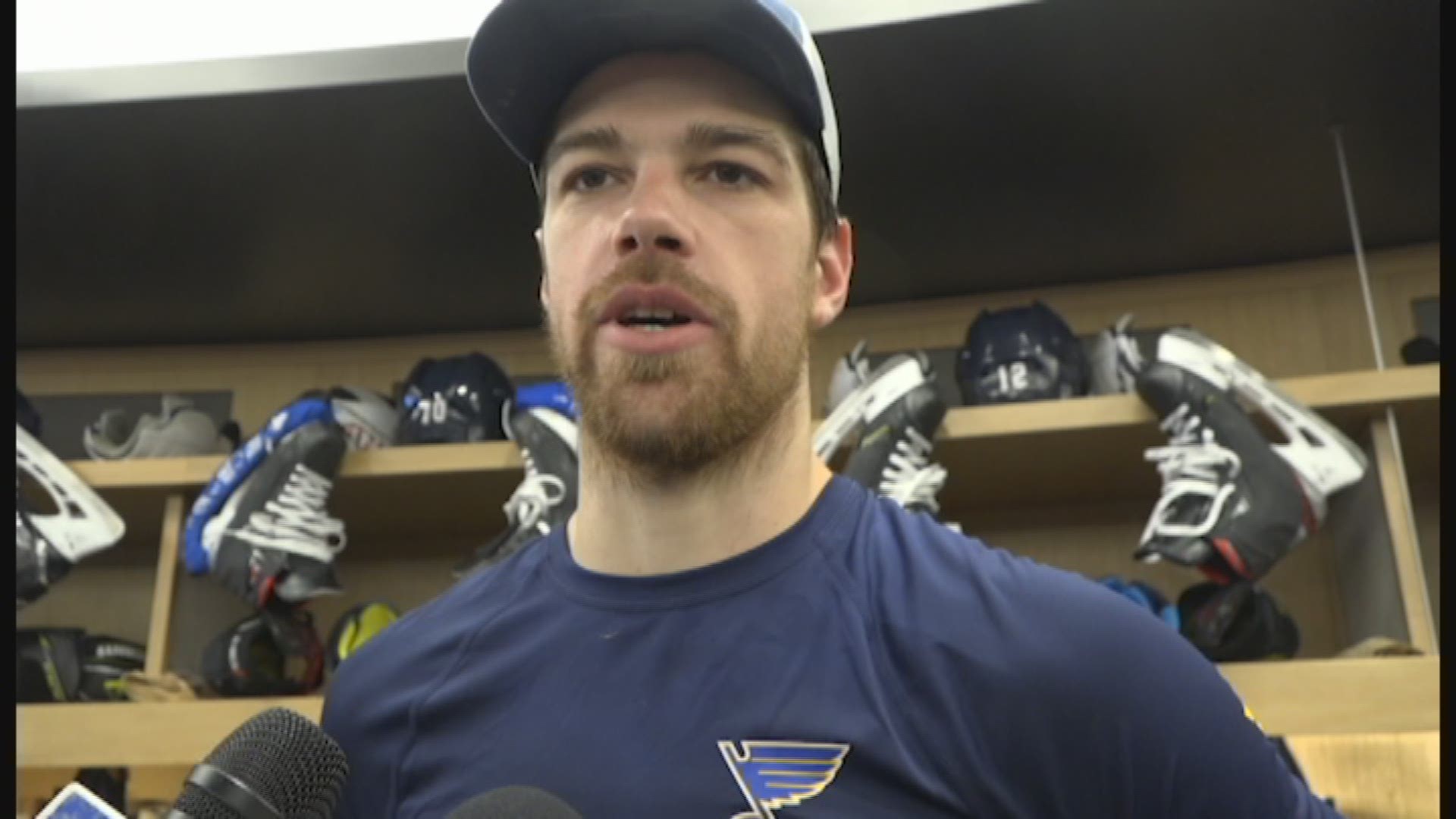 ST. LOUIS — The Blues had a surprise visitor at their morning skate Thursday prior to facing the WInnipeg Jets (7 p.m.; FS-MW, ESPN 101.1-FM).

Well, he isn't exactly a visitor, but there was an unexpected addition on the ice when Vladimir Tarasenko took the ice with his teammates for the first time since dislocating his left shoulder Oct. 24 against the Los Angeles Kings.

Tarasenko, who will have a re-evaluation date towards the end of March, has skated on his own and even took the ice a few times while teammate Sammy Blais was injured but never took part in a full practice.

"We were all surprised, but talking to (head athletic trainer) Ray Barile yesterday, he said Vladi can skate," Blues coach Craig Berube said. "It’s great to start incorporating him around the guys, with the team. He can do some drills with us and stuff like that and get his timing down, I think it’s good."

Tarasenko, who had 10 points (three goals, seven assists) prior to getting injured, had surgery on Oct. 29 and the Blues set a re-evaluation timeline of five months, which still puts him towards the end of March. But having him on the ice with his teammates is not only a boost for Tarasenko's teammates but for him as well.

"While we were talking, he's still a while away, but you know what, it's never easy going through what he went through," Blues forward Brayden Schenn said. "Obviously he wants to be out there with his teammates, win hockey games, score goals. I think from a mental side, I'm sure it's nice for him to be out there and buzzing around. He's working hard to get back and hopefully we'll have him back soon."

Blues center Ryan O'Reilly smiled at the thought of having his locker neighbor back.

"Oh gosh, yeah," O'Reilly said. "Obviously he's a huge piece of this team. It's been a lot of hockey missed. Just to have him back on the ice with us I think definitely kind of excites us as a group, especially going into these keys times of the season and playoffs here. It's nice to see him out there with our group and kind of get that feel back and know that we have this weapon with us.

"We've seen him a lot more. Lately we've seen him getting back on the ice with the other (injured) guys and trainers and such. It was probably coming soon that he would be with us in a bit. It's really nice. It's exciting to see again."

Blues general manager Doug Armstrong recently said more on the cautious side, it will probably be closer to six months when the expectation would be for Tarasenko's return, and Berube said there's been nothing to deter from the original re-evaluation timeline.

"I don’t know. I haven’t really checked into that," Berube said. "It’s great to have him on the ice for sure. Not only for us, but for him too, to be around the guys, start getting back into that routine for him.

Tarasenko was able to skate and shoot wrist shots on goal but not anywhere close to taking contact, which is why the enthusiasm of his teammates may be a little more curbed at this point.

"I don't know if it's a boost because we know he's still a while away, but it's nice seeing him around the rink and skating with the guys," Schenn said. "When you're out, you're on a little bit of a different schedule. You don't see him a whole lot, but it's nice to see him here practicing again with us. I'm not sure how long before he'll be back in, but at the same time, we know if we're going to go on another deep run, we're going to need him and him to be on top of his game and hopefully some regular season games to get him back in game shape."

The Blues are rumored to be in the market for a top six forward, and it all depends on when Tarasenko returns whether they will have the cap space to do that or not.

In the meantime, working No. 91 back into the fold is the first step in the process.

"Just mentally. Mentally you want to be back around the team, you want to be doing what you love, and that's playing hockey," Schenn said. "It's a step in the right direction. I still think it's a long ways away, but it's nice to see him out there."

The Blues and Jets will meet for the fourth and final time this regular-season, and for the second time in six days.

The Blues fell behind 3-0 after two, fought their way back to 3-2 before the Jets scored two empty-net goals.

"I thought we had a real first period. I liked our game the whole game to be honest with you, but you have to capitalize on your chances," Berube said of the Blues' 40 shots on goal. "I don’t think we made it tough enough on their goalie [Connor Hellebuyck]. We had good opportunities and he played extremely well in the game, but we’ve got to get second and third opportunities. We can do a better job of just being harder around their net and capitalizing on chances. I think if we do that, it’s a different game."

Needless to say, the Blues, who are 2-1-0 against the Jets this season, will have a chip on their shoulder.

"It's frustrating; we had a tough loss against them," O'Reilly said. "We want to respond. We want to respond with a big win and that's focusing on the details. We need a big start again, we need to be physical right away. We've got to show them that this is going to be a hard game. They're going to have to earn this one."

The Blues will try to extend their home point streak to 12 games; they're 10-0-1 their past 11 at Enterprise Center.

* Schenn has four points (three goals, one assist) his past two games.