Blues focused on match-ups in game three vs. Jets

'I think the match-ups can hopefully help us find a rhythm a bit quicker, but when you look at the depth of our team, I feel like anyone can play with anyone.' 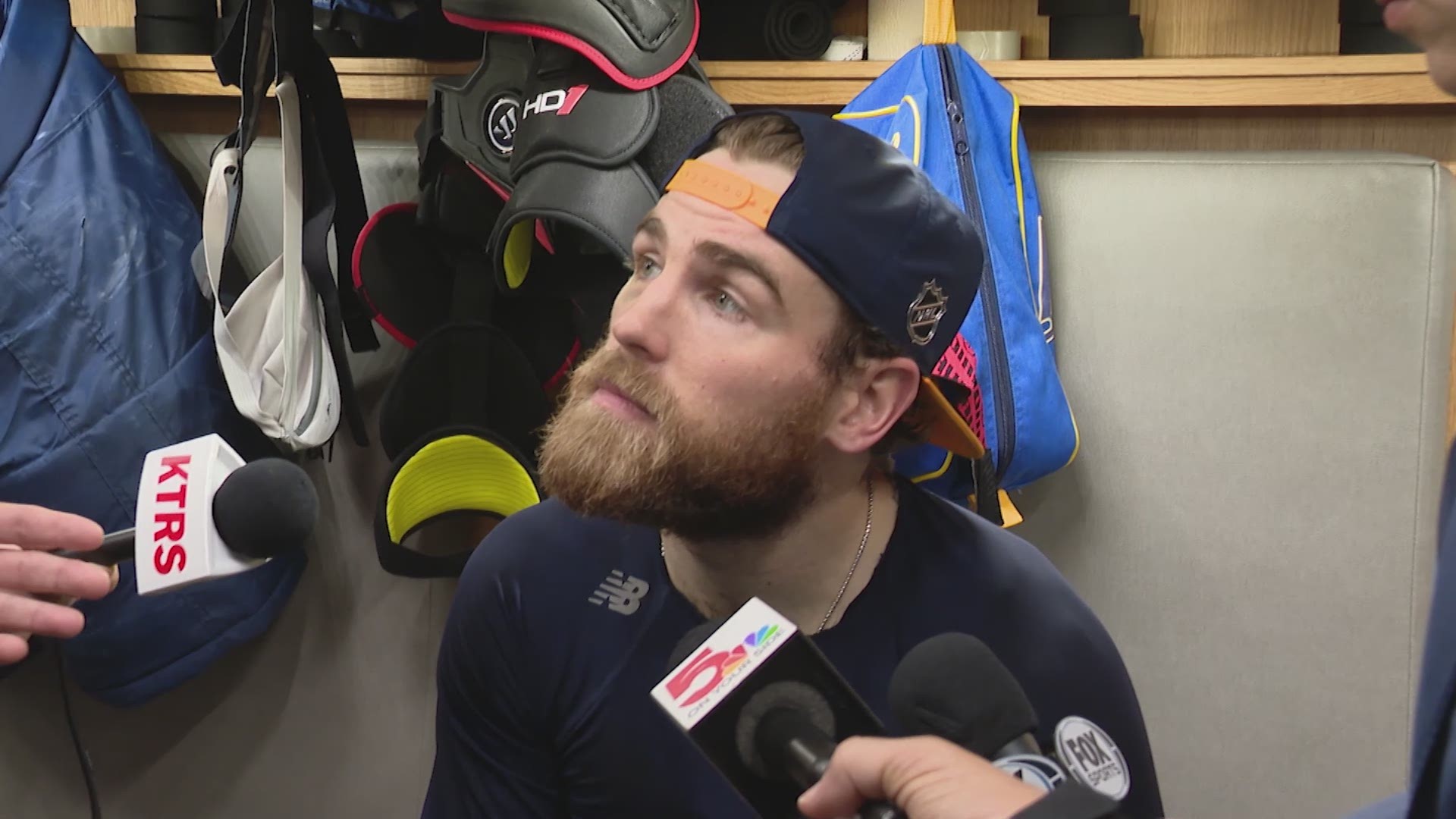 ST. LOUIS — Match-ups are a pragmatic notion where on the road, you're hoping for the best possible scenarios.

Some players say it matters, some didn't have a preference.

Blues defenseman Alex Pietrangelo is one that feels it's important but likes the fact that that the Blues, who can take a stranglehold on the series with a Game 3 win tonight already leading 2-0, utilize all their players each and every game.

"It is. It always is this time of the year," Pietrangelo said. "I think our depth, and kind of work through that if we don't necessarily get the ones that we want. But I know this group's excited to get back in front of these fans."

In the case of Ryan O'Reilly and linemates Vladimir Tarasenko and Brayden Schenn, they can perhaps go back to a match-up of going head-to-head with the Jets' top line of Kyle Connor, Mark Scheifele and Blake Wheeler, a match-up they saw in Game 1. On Friday in Game 2, Jets coach Paul Maurice tried to get their checking line with Adam Lowry out on the ice against the O'Reilly line.

"I'm not sure exactly how it will fall, the match-ups on the night, but I think it will be easier," O'Reilly said. "At different times, we try and make adjustments to try and get away from them and sort it out that way. It should be easier tonight to do it, but at the same time for myself, it's just focus on playing a heavy, hard game and respond well.

Pat Marron on series with Winnipeg

"I think the match-ups can hopefully help us find rhythm a bit quicker, but when you look at the depth of our team, I feel like anyone can play with anyone. Don't think there's ever a time where we need a change or anything like that because everyone's sound defensively, everyone can play with anyone. It's really nice to have that, but in the same sentence, when we can get our matchups, it can help our rhythm and go from there."

The O'Reilly line has one point, O'Reilly's third-period goal in Game 2, and they've received contributions from secondary players (Oskar Sundqvist, Pat Maroon, David Perron and others) to offset the top line's scoring, so perhaps they get the chance with better match-ups at home to go off.

"They're always important, I believe," Blues interim coach Craig Berube said of the match-ups. "Being at home here, we'll have a little better opportunity to get the match-ups we want, but I think so far it's been pretty good. Last game, there was a lot of mixing and matching out there, but the game before that was pretty straightforward to the match-ups. We'll see tonight."

Maurice now gets to play the game of chess with Berube, only going last. It doesn't seem to matter to him.

"The two-line match for us becomes one, they want O’Reilly on 'Scheif'," Maurice said. "The way our lines are structured now, if they’re looking to break them loose, I’ve got another line there that I want to run. So not a whole lot."

Schenn didn't know what to expect, but the idea is to get his line on against the Scheifele line, which was held scoreless in Game 1.

"I have no idea. Game 1 was a lot of Scheifele obviously, Game 2 was a little bit of both," Schenn said. "I think you're going to get two different ways to look at it. Obviously Lowry's line, they compete hard, they're physical, they're good in both ends of the ice. Scheifele's line, they're bit more off the rush, looking to create chances and score, but whoever we get, anyone in this locker room can do a job against anyone on their team I feel we match-up pretty good. It's been a good series so far.

"I think even in Games 1 and 2, Chief wants the match-up for the most part, but we've had guys step in and done good job against the Scheifele line, whether it's our line or (Ivan Barbashev's) line or whoever is playing. They've got so many dynamic forwards and players over there it doesn't really matter who you match up against, you just have to go out and do your job.

"When you have four lines and six 'D' that can play against anyone, there's no panic on the bench. Sometimes when you don't feel you have the match-up you want, maybe you tend to panic or don't play the way you want, but I think all guys out there are comfortable to play against whoever we want and when you're out there, you just do your job."

Blues defenseman Robert Bortuzzo is fine after receiving seven stitches to close a cut on his right wrist stemming from a hit in the offensive zone from Lowry in the third period on Friday.

When Bortuzzo went to the bench, the Blues, whose locker room exit/entry is on the opposite side of the ice, would need a stoppage in play to get him off. They tried desperately to get the officials' attention, and threw a towel onto the ice to stop play, which one of the linesmen finally did.

Bortuzzo returned to the game later in the period and will play tonight.

"It can be (scary) for sure. That's tough," Berube said. "It was a tough play, all around. The linesman, it's a tough play to blow the whistle. We were obviously taking precaution, but everything's fine."

The Blues can win the first three games of a best-of-7 series for the ninth time in franchise history and third time in that last 20 years. They went up 3-0 on Dallas in the 2001 Western Conference Semifinal and against Minnesota in the 2017 First Round. They closed out the Stars and had to go a fifth game against the Wild.

But one thing's for certain, the Blues will be on guard expecting Winnipeg's best tonight.

"Even better effort than last game," Pietrangelo said. "Obviously, they're going to come out firing. We know that. We're going to expect the same kind of game on both sides. It's going to be a physical one. They're going to try and bring that same element. Good day of recovery yesterday, here we go again."

"The crowd's obviously going to be jacked up and they'll be into it," Berube said. "The fan base here is great. They've done a great job of sticking behind this team. They love the Blues here. They're going to be into it for sure.

One thing being at home is Berube would like to see the Blues amp up the physicality in their game, but not to the point of going out of their way to be vulnerable to penalties.

"That's a big thing," Berube said. "We knew going into this series it was going to be a physical series. They're a big team, they're physical, they come hard. We try and prepare for the other guys as much as possible. I think they've done a good job and we've got to keep being disciplined and not get into the retaliation stuff. We have to up our physicality too. I think we can be more physical in certain areas."

"We've played well here the second half of the season," Pietrangelo said. "We've kind of made this a place that's hard to play (in) again. We get our match-ups when we can so we'll use it to our advantage."

The Blues will go with the same lineup as Games 1 and 2 and the one looming question was the decision to start with Joel Edmundson over Carl Gunnarsson, or Zach Sanford over a, say, Robby Fabbri or Sammy Blais or even a Mackenzie MacEachern.

But those players have to stay sharp and ready when called upon.

"They just work, work in practice and get extra skating, staying in shape is all you can do and mentally stay ready," Berube said. "That's a hard decision obviously with Gunny, a veteran guy who's played well for us over the years. Joel's done a good job. He's a big guy, physical and I think he's played well."