The Blues are just 1-4-1 in their past six games. Craig Berube is lighting a fire to get the team ready heading into the last few months of the season. 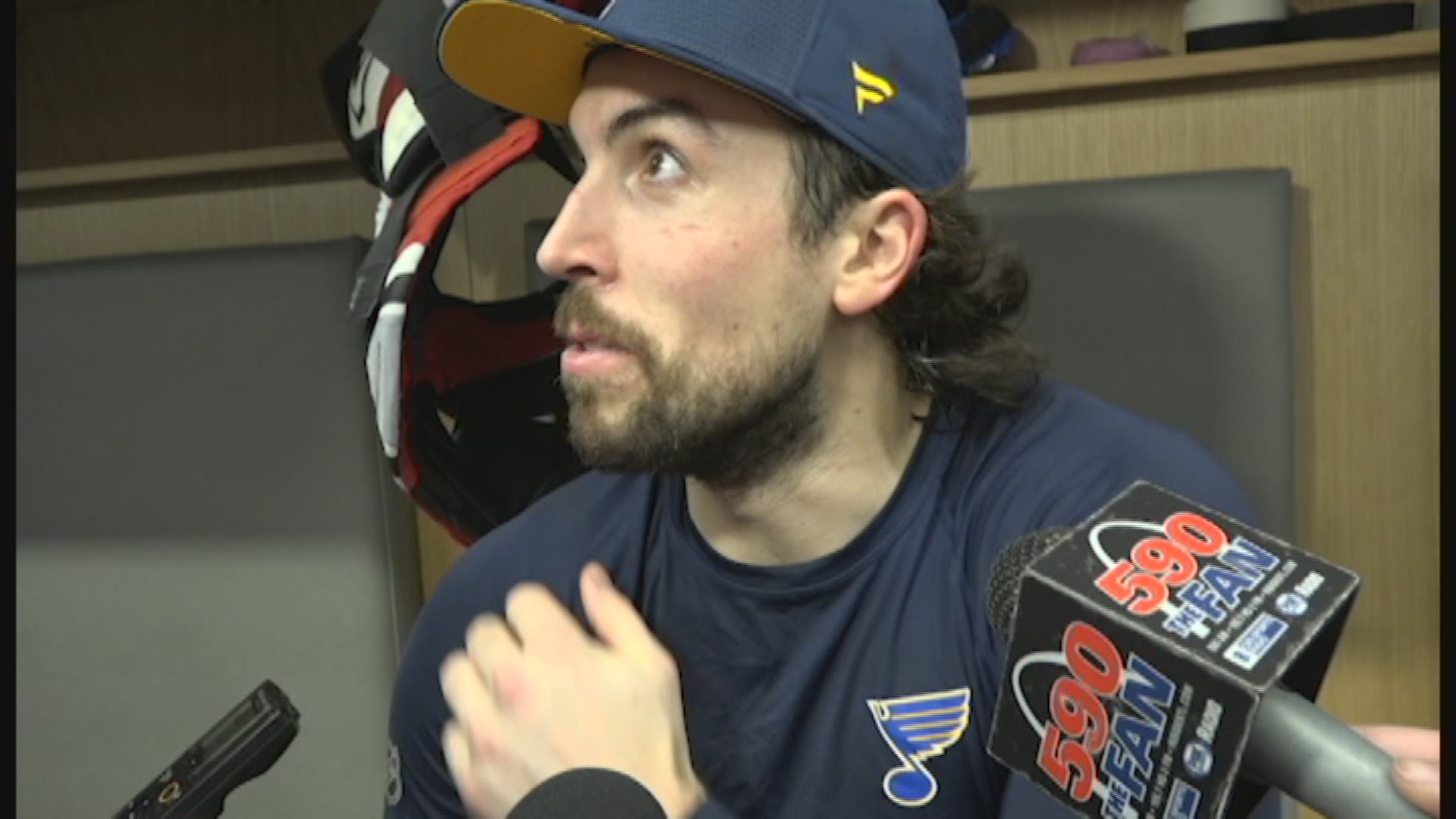 ST. LOUIS — It was a hard, fast-paced, brisk practice for the Blues on Monday and with good reason, according to coach Craig Berube.

They do open a three-game homestand beginning today at 7 p.m. against the Carolina Hurricanes (30-19-3), where the Blues are riding a nine-game point streak (8-0-1), but Monday was about some X's and O's along with simply staying on top of things.

Maybe the players thought it was a good idea, maybe they didn't. They better understand.

"Coming back from this trip, we’re not happy with the results," Berube said. "I think we played some real good hockey on the road, but we didn’t find a way to win games and we’ve got to make sure we keep going in the right direction here. It was a little bit going on today. I don’t think anybody was too happy out there, but that’s OK too."

The Blues are still in a great position here, leading the Western Conference with 70 points, five ahead of the next closest pursuers (Vancouver) and six ahead in the Central Division over Dallas although the margin is getting slimmer. And maybe now that they're looking over their shoulders will get the attention of the players that simply playing well enough but not getting results, which happened a couple times on this past road trip, won't be good enough.

"The Vancouver game was pretty good for the most part, the Winnipeg game was good for the most part, but then at the end of the day, you have to find ways to win hockey games and there’s positives to every game, no doubt about it, but at the end of the day, it’s all about two points," Blues center Brayden Schenn said. "Obviously, it’s not a road trip we’re happy with. We feel like we can start better, no doubt about that. That feeling when we start good and get everyone involved, that’s when we tend to take over games and dominate a little bit. We just haven’t been able to do that lately. So we’ve got to get back to our style of hockey grinding teams down, wearing them out and then that’s how we’re successful."

In order to grind teams down, the Blues need to be better in certain areas, explains defenseman Justin Faulk.

"Cleaning up our play without the puck, I think," Faulk said. "There's a lot of chances that have been given up from losing guys or bad pinches, bad neutral zone and stuff like that. There's some areas to clean up. One thing that kind of stood out to be a little bit is we probably let teams carry the zone with possession. They kind of carried out of their zone with the puck and then got into our zone and made plays through the neutral zone and we didn't clog it up and make it tough for them for chip-ins or chip out of the zone where they've got to chase it down and not just carry it with speed. If we clean up our game away from the puck, we obviously limit their chances and when you do that, you get the puck more and you end up getting more offense out of it that way.

"One of the biggest things with that is if you can create some offense and hold it into the zone, usually when they get the puck, they have to chip it out because they're tired and they can't just carry it in and try to make plays through the neutral zone and you can roll it over and go again from there. ... As a group of five, we need to tighten up a little bit without the puck."

And then there's always the notion of Stanley Cup hangover finally hitting the Blues in the gut. They're tired, they look sluggish, worn down from the rigors of an extended postseason that saw them play 26 of a possible maximum 28 Stanley Cup playoff games.

No, it's one of those times in the season where we're in a little lull," Parayko said. "We've played some good hockey and then obviously the one in Calgary, we definitely didn't play a very good game and we end up winning. I don't think that fatigue would be in the question. We're good. We're fine. Lots of games left and we still have lots of points left in the bank. Get it done."

* Parayko up and going again -- Speaking of Parayko, his return after missing seven games with an upper-body injury coincided with a week off for the All-Star break, so in reality, Parayko, who had never missed more than three regular-season games in his previous four seasons in the NHL, had 25 days off between games.

He returned Jan. 27 against Vancouver and resumed his role on the right side partnering with Jay Bouwmeester.

"I think I'm good," Parayko said. "I'm just trying to grow my game as one game into the next, just trying to progress and keep getting better. Obviously it's different being out for three weeks. I've never really kind of had that missed time in my career. It was different for me, it was difficult. I just wanted to come back in and keep it simple and then just gradually grow my game into where it was before. I'm trying to find it. I think we're trending in the right direction."

Like any player, Parayko pushed for an earlier return; he even was a regular participant in Blues practices between games but was held off the ice for those seven games missed.

Parayko understood the decision considering how much hockey he's played since his rookie season of 2015-16, but still has that fire and drive to want to be in there.

"I wanted to play, but at the same time, I understand, especially last year just how hard the stretch run at the end of the year is and how long the run can be," Parayko said. "If you need to take a couple games to make sure you're ready for a deep playoff run and then that's what matters the most right now. Just trying to do it again.

"Especially coming from a college standpoint too. You only play 30 games and my first year, we played more than we did all three years of college. It's definitely a lot of hockey, but it's fine. First year we went to the semifinals, a year after that, we were in the quarters, then obviously missing (in 2018) and then we went all the way last year. It has been a lot of hockey. Some teams haven't made the playoffs in four years that have been in the league but it's fun. I'd rather be on a winning team and team that gets the chance to win. I'm happy."

* Lineup tinkering -- At Monday's practice, some of the highlights included Berube putting Robert Thomas on a line with Schenn and Jaden Schwartz and using Thomas as the center and Schenn on right wing. Also, Tyler Bozak moved back to the middle centering Alexander Steen and Jordan Kyrou, and Ivan Barbashev centering Sammy Blais and veteran Troy Brouwer.

On defense, Carl Gunnarsson skated with Alex Pietrangelo and Vince Dunn was partnered with Faulk.

Thomas getting some ice time in the middle raised some eyebrows.

"Yeah, I’m looking forward to it," Schenn said. "He’s playing really good hockey right now, he’s hanging on to pucks, making plays, skating well. Hopefully me and 'Schwartzy' can kind of pick up where we left off there in Winnipeg in the third period. We thought we created some chances and tomorrow night we’ve got to do that again."

Later in drills, Schenn was in the middle and Thomas on the right wing. But that's nothing new for the Blues utilizing two centers on one line, and when asked who was playing center, Schenn smiled and said, "Both of us. We’ll both take faceoffs and we’ll take turns reading off each other but I’ve done that before. It’s good. It gives you a chance to have the opportunity to win a lot of faceoffs with both of us being on our backhands and it doesn’t really matter who’s playing center."

It's quite evident the more Thomas plays, the more assertive he gets.

"It comes with any good young player," Schenn said. "You get more experience, more opportunity and he’s taking full advantage of it right now. We all know he’s going to be a very good player in this league and you’re just starting to see what the potential could be. He’s skating extremely well right now, he’s hanging on to the puck, he has very good vision, he makes little plays in five, 10 foot areas that maybe not a lot of players can make and we’re looking forward to playing with him and it’s another chance for him and for us to generate some offense."

Remember when Brouwer was put on waivers last week and was given the road trip to ponder if he wanted to go to the American Hockey League or retire? Well, one injury changed all that when Oskar Sundqvist (lower-body) was placed on injured-reserve after getting hurt in the third period against the Canucks on Jan. 27.

Brouwer played Saturday at Winnipeg and is pegged to play again against the Hurricanes.

"It’s not easy, but he understands the situation and what he’s dealing with and he’s good about it," Berube said of Brouwer. "His attitude is good about it all. I thought he had a good game in Winnipeg.

"I thought he had a good game (Saturday). He’s a smart player, he’s been around, he had a couple good scoring chances, I thought he did a good job."

One guy who's picked it up of late is Zach Sanford, who has a five-game point streak (two goals, five assists) and has a points in six of his past eight games (three goals, six assists).

The Blues continue to groom Sanford, and he's rounding out his consistency playing with O'Reilly and David Perron.

"Strong on the puck, good smart puck plays, being physical," Berube said of Sanford. "He’s made some real good puck plays, feeding O’Reilly and Perron. Smart decisions with it through the neutral zone, which is key getting it deep or he has an opportunity to get the line, he gets the line. Also, he’s playing hard, he’s being physical and going to the net, and doing a lot of little things right and they’re getting results that way."

Sanford needs one point to match his career-high of 20 set last season. He already has established a career-high in assists with 19 and done so in 40 games, 20 fewer than last season.