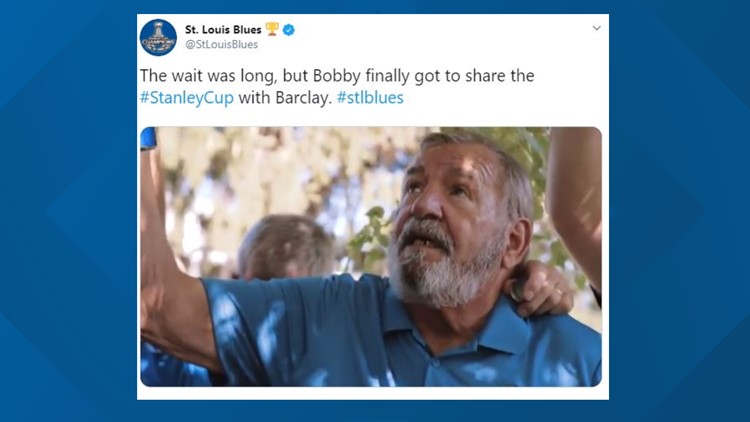 Bob Plager was just one of the leading characters of this past Blues Stanley Cup run.

While the original Blue's playing days might be long gone, there was still a sense that this year's team was trying to win one for him.

In June, Plager's 50 plus years of waiting finally came to an end. He got his Stanley Cup and his parade.

There was another member of the Plager family, though, that wasn't able to share in the excitement of a Blues Stanley Cup.

So when Bob got his own personal day with the Stanley Cup earlier this month, he knew exactly where he was going. The Blues tweeted out an emotional video of Bob's tribute to his late brother on his special day.

"My plans always were if we ever won the Stanley Cup my first stop was going to be to the graveyard to spend a little time with my brother Barclay," Bob said in the video tweeted out by the Blues.

Bob and Blues General Manager Doug Armstrong helped pour some celebratory champagne on Barclay's grave after making a toast and taking some pictures.

Watch: Bob Plager gets his parade

The Plagers will also have another neat connection to the Stanley Cup here in the near future.

When the Stanley Cup championship banner is raised to the rafters on opening night against the Capitals, it will join Bob and Barclay's retired numbers at the top of the Enterprise Center.