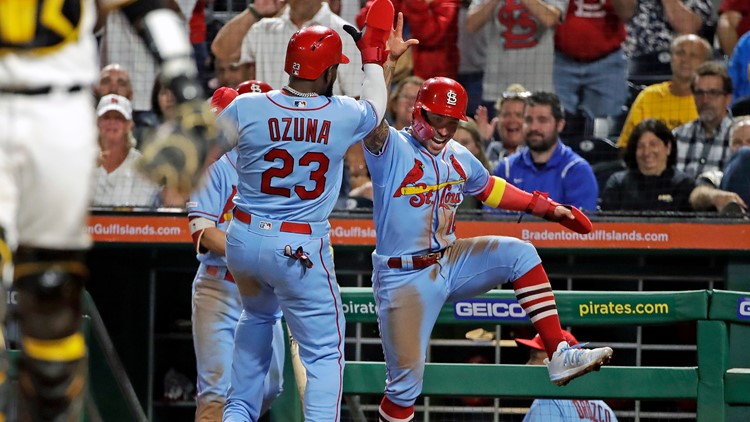 PITTSBURGH — Marcell Ozuna picked a really good time to break out of his slump.

Ozuna had just two hits in his previous 36 at-bats, including an out in the first inning, before launching a three-run homer in the third that sent the Cardinals to the win over the Pirates on Saturday night in Pittsburgh.

Just like Friday night, the Cardinals had a 4-1 lead in the game but this time Adam Wainwright and the bullpen did not allow the Pirates to come back and the Cardinals added additional runs to coast to the victory.

The home run for Ozuna was his 26th of the season and his seventh three-run homer, tied for the second most in the major leagues behind eight by Mets’ rookie Pete Alonso, who leads the NL in home runs.

The win, combined with the Cubs loss to the Brewers, left the Cardinals with a 3 ½ game lead in the NL Central – their biggest lead since they led the division by four games on Sept. 30, 2015. There are 20 games left in the season.

At the plate: Ozuna also scored three runs as he walked twice and both times came around to score … Paul DeJong and Harrison Bader each added two RBIs, while Kolten Wong had two hits and scored twice … Wainwright even chipped in with two hits, including a double … Yadier Molina extended his hitting streak to 14 games … The Cardinals had 22 at bats with runners in scoring position, collecting five hits.

On the mound: Wainwright worked seven innings, allowing the one run on six hits while walking one and striking out three … Junior Fernandez had a 1-2-3 eighth before Daniel Ponce de Leon pitched the ninth, allowing a walk but also recording three strikeouts.

Key stat: The Cardinals have scored 10 or more runs seven times in their last 27 games since Aug. 11.

Worth noting: The win was only the second in 11 games this season when the Cardinals have worn their “victory blue” uniforms for Saturday road games … Wainwright has won four of his last five decisions and has allowed only run and walked one in his last two starts, covering 14 innings.

Looking ahead: Jack Flaherty will try to continue his dominating stretch when he gets the start in the final game of the series on Sunday.

RELATED: Gone But Not Forgotten: How Chris Duncan chased and fulfilled his dreams