The Cardinals offense exploded on Thursday and helped keep them four games up in the race for the NL Central title. 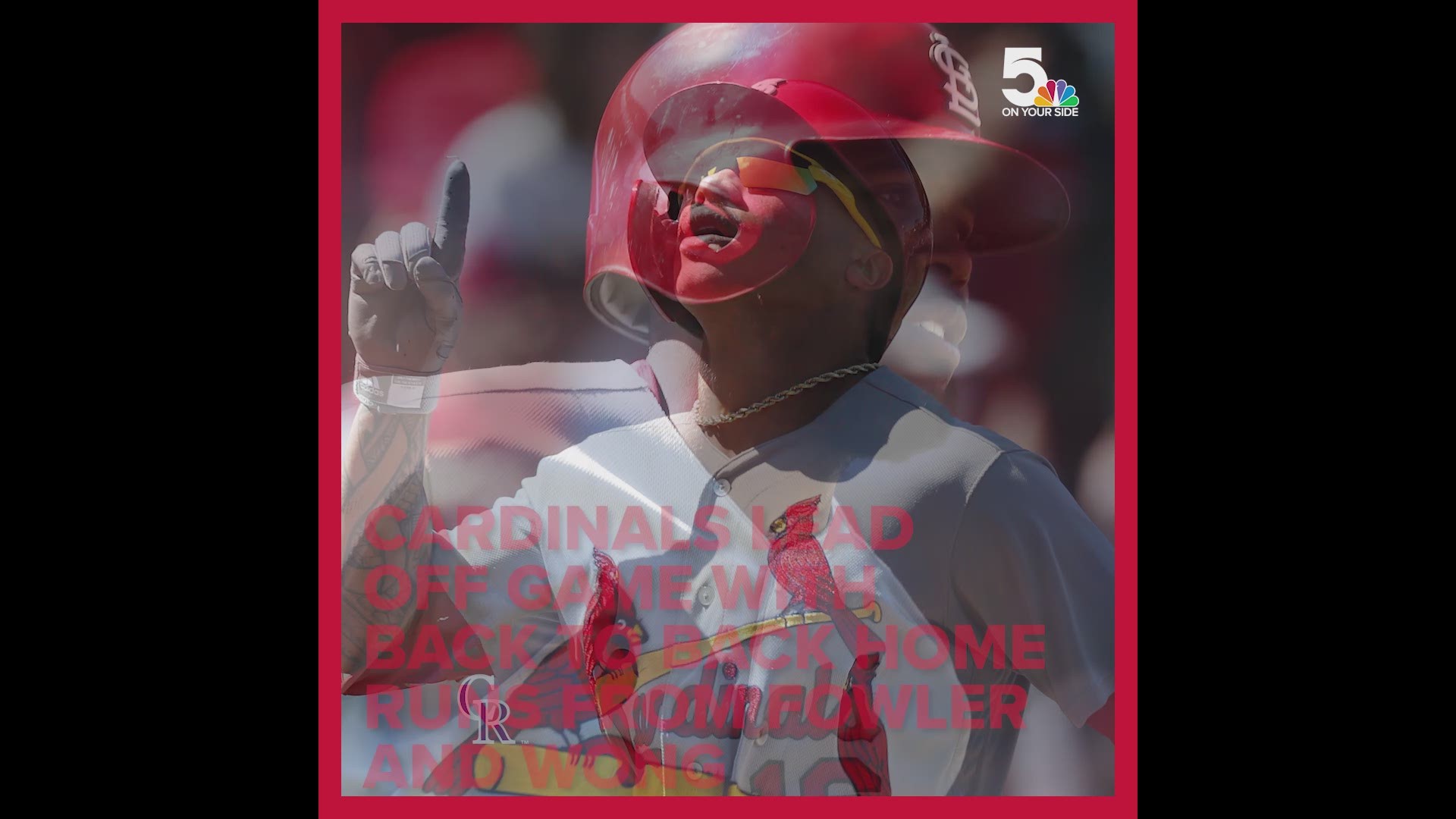 DENVER — Dexter Fowler and Kolten Wong opened the game with successive home runs and the St. Louis Cardinals connected five times in all to beat the Colorado Rockies 10-3 on Thursday.

Marcell Ozuna, Rangel Ravelo and Harrison Bader also homered for St. Louis, which holds a four-game lead over Chicago and Milwaukee atop the NL Central.

Limited to a total of two runs in losing the first two games of the series at Coors Field, the Cardinals quickly bounced back.

Fowler drove the first pitch of the game from Tim Melville into the second deck and Wong followed with a drive that soared over the center field wall.

Nolan Arenado homered and doubled to drive in a pair of runs for Colorado. Josh Fuentes hit his first big league home run.

Miles Mikolas (9-13) went five innings and allowed three runs on five hits. He struck out five and walked one.

Colorado scored in the first on an RBI double by Arenado, but the Cardinals turned to the long ball again as Ravelo homered leading off the second.

St. Louis moved in front 4-1 on a sacrifice fly by Wong despite a fine play by Arenado. The star third baseman made a running over-the-shoulder catch in foul territory and turned and threw a one-hop strike to home, but a charging Bader knocked the ball loose from catcher Dom Nunez in a bang-bang play at the plate.

Ozuna led off the third with a home run against Melville (2-2).

Leading 6-3 going into the ninth, the Cardinals broke through for four more runs as reliever Wade Davis walked two and hit Paul DeJong with a pitch before giving up a two-run double to Matt Carpenter. Jake McGee relieved and Andrew Knizner had an RBI single with another run coming home on a balk.

Home plate umpire Gerry Davis was struck in the chin by a foul tip off the bat of Fuentes in the fourth. The ball hit Davis with such force that it knocked his mask to the ground. After being looked at by medical personnel, Davis was escorted into the clubhouse for further examination. He was replaced behind the plate by first base ump Brennan Miller, and the rest of the game was handled by three umps.

RELATED: Opinion | Why the Cardinals need to think long and hard about Harrison Bader's future

RELATED: Looking at the NL Central race as October nears

Fowler also figured in the Cardinals' most recent two-homer start to a game. He and Tommy Pham hit successive home runs to open a game at Milwaukee on April 3, 2018.

Rockies: CF Ramiel Tapia was a late scratch from the starting lineup because of lingering soreness in his bruised right knee. Tapia left Wednesday night's game early after fouling a pitch off the inside of the knee.

Cardinals: Return home for a key series against NL Central Division rival Milwaukee with RHP Adam Wainwright (11-9, 4.16 ERA) slated to pitch Friday night's opener. Wainwright's 16 career wins against the Brewers are the most among active pitchers.

Rockies: RHP Jeff Hoffman (1-6, 7.06 ERA) is making his sixth start this season at home, where he has gone 1-3 with a 7.33 ERA as Colorado opens a series against San Diego. He's bidding for his first win since May 29 against Arizona.