'This is just so uncharted territory, there are no answers' | Travis Ford talks about SLU's COVID outbreak, when his team could be back

"I'm taking it one day at a time. Right now, I just don't know how my team is going to respond with so many players having tested positive." 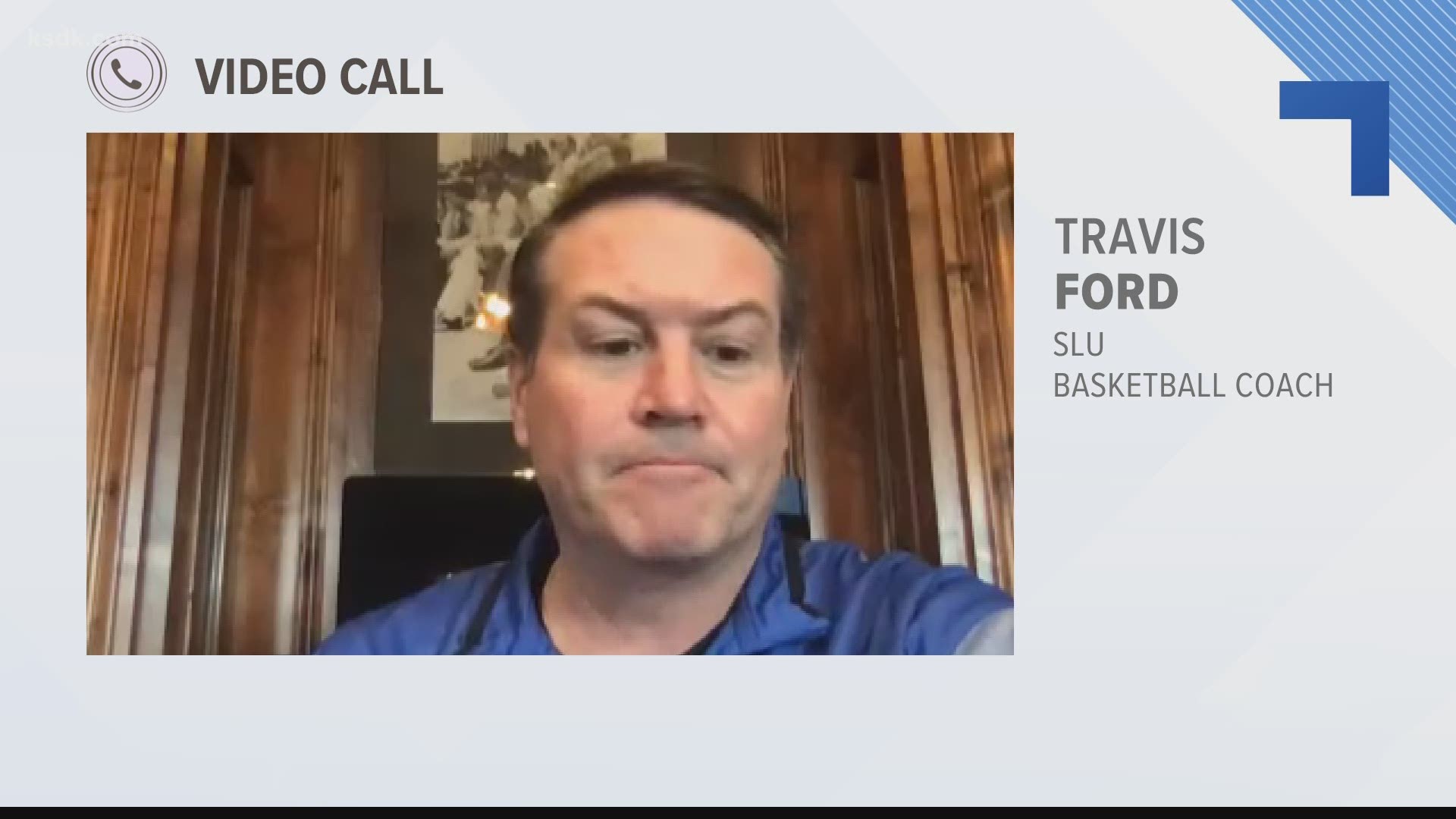 ST. LOUIS — The SLU Billikens haven't practiced as a team in 22 days. They haven't played a game in 28 days. COVID has hit their program harder than most across college basketball.

It started with just a couple of player positives in late December, and grew and grew. Even head coach Travis Ford caught it, and had a pretty nasty time fighting it off.

The Billikens have finally been cleared to get back on the court in some fashion, but the No. 25 team in the country still can't practice together.

"Yeah, we're doing them in groups, you know, we're slowly adding players. Not only adding players, but every player has a designated time that they can go and they work up from 15 minutes. They go 15 minutes one day, 15 minutes the next day, then they go up to 20 for two days and they go to 45 minutes for a day and then they can be released," Ford said. "So if you were a positive on our team you were quarantined or isolated for 10 days and then once you come out after those 10 days, you still have seven more days before you can full go any live action. You don't do any live action play and you're at a very minimum as far as minutes is concerned, up until day seven. So that's really what's kept us out for so long. Is that seven day period."

So when might we see the Billikens back in action? Even though it's been a month since they've played a game, it still looks like it'll be a little while longer.

"We have a game Saturday, that we have scheduled but it most likely won't be played either right now. The goal might be to next Tuesday, a week from today could be a goal but I'm not even setting that day," Ford said. "I'm taking it one day at a time. Right now, I just don't know how my team is going to respond with so many players having tested positive. I don't know exactly what it's done to their bodies, and I want to make sure they're okay, physically and mentally before we throw that ball up again."

While health is the most important thing for his team, Ford did say almost all of his players who did test positive had mild symptoms.

"None of our players really out of all of them that got tested positive, none of them had bad symptoms, most of them didn't have any symptoms hardly at all. So from that standpoint, you know, they came back in pretty good shape," Ford said. "But with that said, we got to understand these guys have been sitting in a room doing nothing for 10 and 14 days straight and weren't allowed out at all. And that's taken its toll. So they have come back. Some of them have made it through the workout. Some of them, you know, it's a little bit tougher. I think this virus affects everybody a little bit differently. But we're like I said, taking it one day at a time."

The Billikens have seen themselves crack the AP Top 25 while they've been paused, and are a team primed for some excitement come March.

But can SLU return to the court and recapture the level of play they had become accustomed to?

"We've done a lot to this point to prove that we, you know, are one of the best teams in the country. Now, do I think we're going to come out of doing nothing in the middle of a season for almost three to four weeks and be the exact same team we were in the very first game? You know, I don't know," Ford said. "I hope we're good enough to win that first game whenever that is. I hope we're good enough. I don't think we'll be to that point yet, and it's nobody's fault. There's nothing we can do about that. Do I think we can get to the point where we were playing you know as good as we were and need to be even better? Absolutely. I do not have a timetable on that. I wish I did. I have no idea."

Ford is hoping for the best, but also taking everything as it comes. He knows there's no playbook for how to navigate this season.

"The biggest thing I keep telling everybody is, this is just so uncharted territory. There are no answers. We're figuring this out minute by minute, hour by hour," Ford said. "Even my practices, even that workouts. I'm having to spend an enormous amount of time figuring out this guy can do 10 minutes this guy can do 15 minutes this guy, you know, until we get everybody back. It's going to be hard to tell exactly how fast will be able to get back to you know the form we were at."