5 On Your Side Countdown: The 10 worst trades in St. Louis sports history 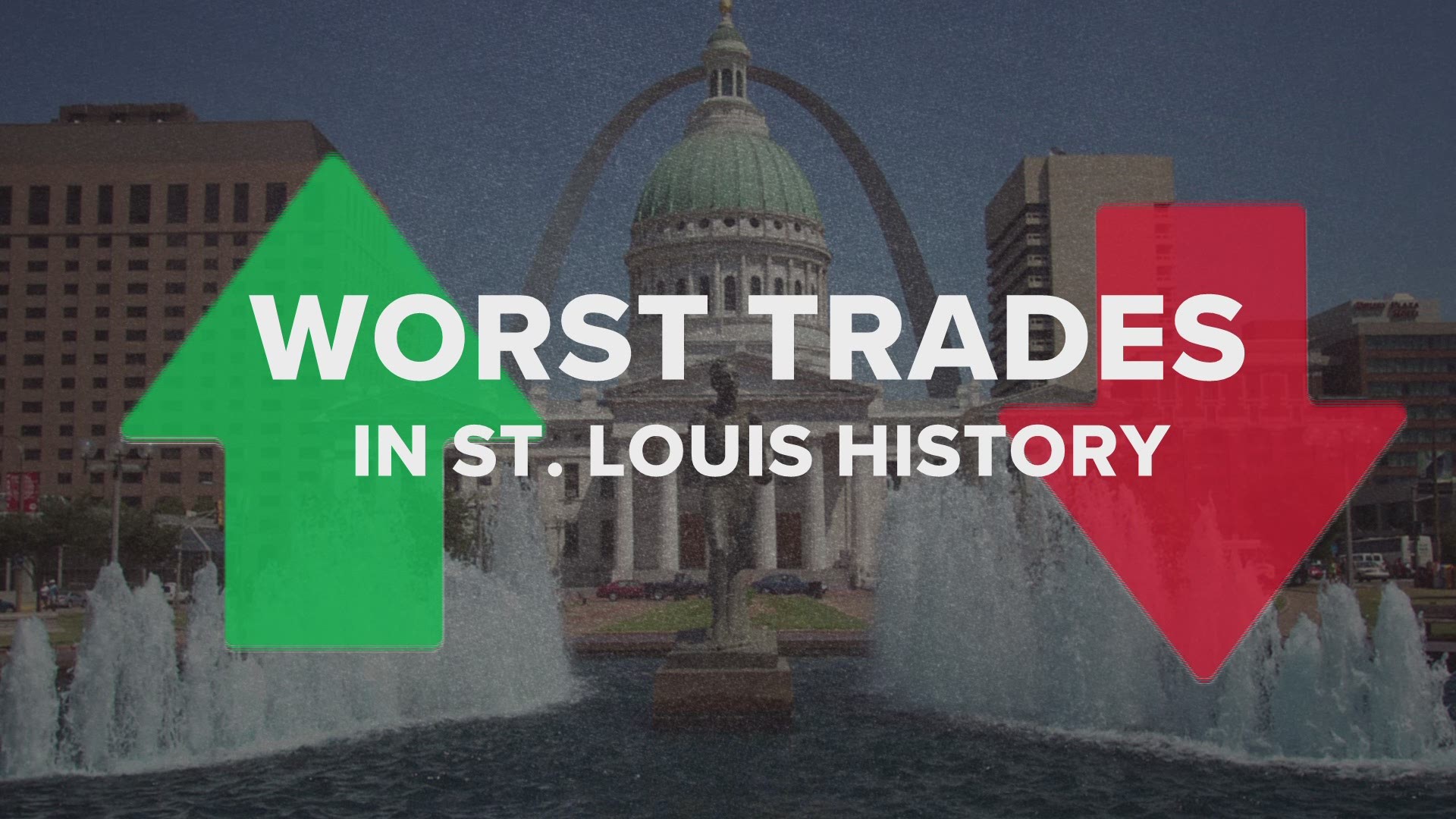 Sports director Frank Cusumano is rolling out his list of the 10 worst trades in the history of St. Louis sports.

We know St. Louis teams have struck it big with good trades, but they've also had a few duds, too.

Do you agree with the list? Let us know.

In 1986 the Blues traded Joey Mullen to the Flames in which they received a good player in Gino Cavallini. Mullen was a great player.

When Mullen retired he had scored more goals and tallied more points than any American player ever.

He won three Stanley Cups after leaving St. Louis and is in the Hockey Hall of Fame.

Two years later they traded him to Buffalo for backup quarterback Dennis Shaw.

Shaw played in five games with the Big Red before retiring.

Another miss by the Big Red.

Credit: ASSOCIATED PRESS
** FILE ** In this 1971 file photo, location not known, Ahmad Rashad, who was then known as Bobby Moore, is seen when he played college football at Oregon. Rashad is to be enshrined in the College Football Hall of Fame on Saturday night, July 19, 2008, in South Bend, Ind. Rashad set 14 school records and was a three-time all-Pac-8 selection during 1969-71, first as a wide receiver his sophomore season and then as a running back in his junior and senior seasons. (AP Photo/File)

8: Reggie Smith to the Dodgers for Joe Ferguson, Bob Detherage and Fred Tisdale

The Cardinals traded Smith to the Dodgers in 1976.

Smith became a star in Los Angeles. He played in seven all-star games in his career, had 2,000 hits and 1,000 RBI. He won a gold glove and a World Series with the Dodgers.

Credit: ASSOCIATED PRESS
Sparky Anderson (10) coach of the National League, thanks Reggie Smith of the St. Louis Cardinals as he passes third base after hitting a home run in the 7th inning of the All-Star game, Tuesday, July 23, 1974, Pittsburgh, Pa. The home run put the National League ahead 5-2. (AP Photo)

7: Dave Butz to the Redskins for draft picks

The Big Red got a lot of draft picks for Butz, but we know how the team drafted. (Not so great)

Butz became one of Washington's best players in franchise history.

He won two Super Bowls, was a defensive player of the year and a member of and NFL all-decade team.

Credit: AP
Defensive end Dave Butz (65) of the Washington Redskins is shown in this 1975 photo. Exact date and location are unknown. (AP Photo)

6: Jerry Reuss to the Astros for Scipio Spinks and Lance Clemons

5: Jerome Bettis to Steelers for second and fourth rounder

In 1996 the Rams sent Bettis to Pittsburgh because they drafted Lawrence Phillips. Yeah... that didn't work out.

Bettis went on to rush for 2,683 yards after leaving the Rams, made six Pro Bowls, won a Super Bowl and is in the Pro Football Hall of Fame.

The Rams shouldn't have let "The Bus" leave town.

Credit: AP
Los Angeles Rams running back Jerome Bettis carries the ball against the Atlanta Falcons in Anaheim, Calif., Oct. 2, 1994. Bettis, the Rams' battering ram, has been carrying the ball so much he's in danger of becoming the battered ram. (AP Photo/Eric Draper)

4: Keith Hernandez to the Mets for Neil Allen and Rick Ownbey

The Cardinals were in a tough spot. They felt they had to trade Hernandez because of drug concerns, but they should've gotten a lot more in return.

Hernandez is the best defensive first baseman of all-time and has 11 Gold Glove to show for it. He won a World Series in New York, and will still likely make it into the Cardinals Hall of Fame.

3: Chris Pronger to the Oilers for three players including Eric Brewer

Following the NHL lockout of '04-'05, the Blues were looking to be penny-wise and were pound foolish.

They sent the best defenseman in franchise history to Edmonton, and Pronger kept on racking up all-star appearances, MVP votes and eventually won a Stanley Cup with Anaheim in 2007.

2: Steve Carlton to the Phillies for Rick Wise

The most infamous trade in Cardinals history.

Wise was no stiff. Carlton was just one of the greatest pitchers in the history of baseball.

Carlton went on to pitch for 16 more seasons, and became a legend in Philadelphia. He had 329 career wins, 4,136 career strikeouts and is in the National Baseball Hall of Fame.

This was truly a franchise-altering trade.

Credit: AP
Steve Carlton, Philadelphia Phillies lefthander, cocks pitch and kicks for 9th inning throw to win his 15th straight game in row and become the first 20-game winner in the National League this season in his 9-4 win over the Cincinnati Reds in Philadelphia Thursday night, August 18, 1972. (AP Photo/Bill Ingraham)

1: The draft rights of Bill Russell to the Celtics for Ed Macauley and Cliff Hagan

Macauley and Hagan are great players who ended up in the Hall of Fame. But just think about it...

Bill Russell is the greatest winner in the history of team sports.

He won 11 titles in Boston. Nobody else is even close.

Just image if he had come to St. Louis and created that dynasty here. We may still have an NBA team today.

Credit: ASSOCIATED PRESS
Bill Russell, member of the University of San Francisco basketball team, shows how he scores baskets on Feb. 23, 1956. The 6-foot, 10-inch center, ranked one of the best, has helped his team win 20 straight games during the current season. (AP Photo)

RELATED: 5 On Your Side Countdown | The 10 most influential trades in St. Louis sports history