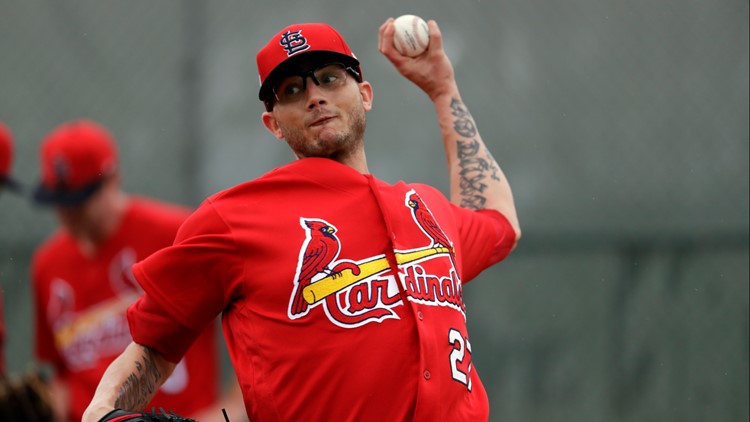 Buffa: Why it's time for the Brett Cecil experiment to end in St. Louis

ST. LOUIS — When the St. Louis Cardinals traded for Brett Cecil, MLB analysts pegged him as the second best lefthanded reliever behind Aroldis Chapman. John Mozeliak handed the former Toronto Blue Jay a four year contract worth $30.5 million, which would help solidify the Cardinals' bullpen for years to come.

Oh boy, things sure have spiraled out of control.

Once seen as a difference maker down in the pen, the only relief Cecil has created is equivalent to a knockoff pain medication—the kind that doesn't take away the headache or reduce the fever.

Remember when he came into a game in April 2017 at Busch Stadium and served up a game-winning blast to Kyle Schwarber of the Chicago Cubs? That's when fans started not trusting him. After Cecil seemingly recovered the majority of his debut season in St. Louis, 2018 showed the true horror of his ways in the National League.

In order to illustrate how much of a dive Cecil's stats took last season, let me just lay out the numbers for 2017 and 2018. Look them over, take a long pull of coffee, and we can continue.

The ERA and FIP nearly doubled, and he allowed just about an extra runner on per inning pitched. The innings pitched was nearly cut in half, but that was due to ineffectiveness, injury and a general sense of "no more" once Mike Shildt took over as manager. Cecil was no longer a sure thing or any kind of legitimate arm of reason for the team.

The most striking difference about Cecil was the inability to miss bats. For four seasons in Toronto and in the toughest division to pitch in the majors, Cecil put up double digit totals for strikeouts per nine innings. In 2017, it dropped to 8.8. In 2018, it fell all the way to a Tony Fossas-type 5.2.

In 2017, he was striking out four batters for every walk issued; last year, he couldn't even notch a strikeout for every walk. It was an ugly collapse in productivity.

READ MORE: The five most impressive Cardinals so far in spring training

This spring, Cecil is struggling to get minor leaguers out on the backfields. You could put this guy into a rookie league right now in Florida, and he may not get that many outs. He would be the most expensive underachiever that a journeyman manager down in the low end of the minors would have to cut. Try and imagine the scene from Bull Durham with the manager and a player he has to release. "This is the hardest thing a manager has to do" ... releasing a player who will still cash a $7.7 million paycheck.

That's right. Cecil will make nearly $8 million this season to barely pitch for the Cardinals, and that's the way it should be.

It's time to officially file for divorce.

What the coaches thought could work with Cecil has not. Mike Maddux is not a miracle worker. There's nothing a man of his talents can do for a dead arm like Cecil. Keeping him on the team would be labeled, "baseball charity."

OPINION: Why the Carlos Martinez plan won't be an easy one to figure out for the Cardinals

The biggest problem with Cecil this spring is a lack of proper mechanics. If it was just an off-year with a chance for an upswing, that would be one thing. But Cecil's rhythm and pitching motion is all messed up. He lost a bunch of weight in the offseason, but that did nothing to help his pitching. Health-wise, you salute him. Baseball-wise, you pack his bags and wish him well.

Swallowing the remaining $15 million won't be easy. A guy that the team once envisioned as a late-inning arm probably won't make it more than halfway into his deal due to ineffectiveness.

Having pitched effectively in the American League hitter's paradise for so many years, I applauded the move when it was announced. Cecil was a very good arm who rightfully commanded a big contract, but something fell apart in the transition. When I asked Cecil about the difficulty in switching leagues at last year's warm-up event, he acknowledged the toughness in the endeavor in learning new hitters and their ways. He just couldn't do it.

Now, you might say, why stick with Dexter Fowler over Cecil? Each had a disastrous year, are owed a lot of money and could bounce back. The chief reason is salary owed. Fowler will receive nearly $50 million whether he starts or not. Also, Fowler's chances of bouncing back are seemingly higher. He battled depression, a manager who lost faith in him and injuries last season. There's hope there. Also, the Cards are leaning on him more than they are Cecil.

The fate of the 32-year-old reliever was sealed when the Cardinals signed Andrew Miller to a two-year deal. Couple that with Chasen Shreve and possibly Austin Gomber helping out in the bullpen this season, and there's little room for a Cecil experiment. The revival tour ended prematurely.

When KMOX radio host Tom Ackerman asked John Mozeliak Sunday about Cecil's roster chances, the Cardinals' president of baseball operations didn't give the southpaw a huge chance to make the team, saying he wasn't in the mix at the moment.

According to Derrick Goold of the St. Louis Post-Dispatch, Cecil will start the 2019 season on the injured list, remaining in Florida. This to me feels like a band-aid, one that will be ripped off before long—delaying the obvious until it's time to cut the rope.

If people want a concrete reason why Bill DeWitt Jr. doesn't hand out long-term deals to relievers, pull out the Cecil file and give it a look. Banking big and investing in the long game on a reliever touching the wrong side of 30 is rarely ideal, even if the market convinces you it is. The two-year deal for Miller is more of the Cardinals' speed and for good reason.

The thrill of a Cecil appearance died a long time ago. This month, the thrill of a comeback should perish as well. It's time for the Brett Cecil experiment to end... sooner rather than later.