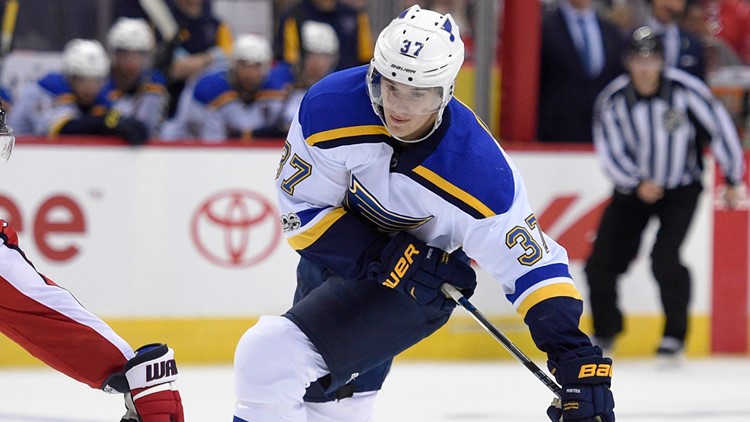 Commentary: Kostin's NHL debut was solid, offering a glimpse of what the high draft pick can do next

ST. LOUIS — The butterflies were certainly circling around Klim Kostin's stomach on Saturday night, it was amazing in itself that he remembered before taking his solo rookie lap that something was missing.

"I always practice with helmet," Kostin said. "But today, somebody on team stole my helmet before practice. I was like, 'Where's my helmet?'"

One of Kostin's teammates swiped the Russian rookie's head gear before taking the ice for his first NHL regular season game on Saturday against the Anaheim Ducks. It's a mystery as to who the culprit was, but the 20-year-old didn't mind. After all, it was time for the 2017 NHL Draft's 31st pick to perform on the big stage for the first time.

"That's great feeling," Kostin said. "It's your first NHL warmup. Well, second one, I got [Friday at Columbus but was a healthy scratch]. First lap (Saturday), I was alone. Somebody stole my helmet and I just skate out."

RELATED: Klim Kostin is here, but what impact will he have for Blues?

Kostin, who was recalled Wednesday from San Antonio of the American Hockey League to give the Blues (12-4-5) an extra forward, was finally given his first test at this level after much anticipation from a fan base that's been clamoring for the 6-foot-3, 212-pound Penza, Russia native.

The Blues couldn't make it a triumphant debut for Kostin. They lost 4-1 loss to the Ducks, the Blues' first regulation loss in 10 games, but the power forward seemed to fit in nicely for a debut. He finished with 11:45 time on ice playing the third line with Tyler Bozak and fellow 2017 first-round pick Robert Thomas (20th pick). He had two shots on goal and was tied with Sammy Blais with four hits.

Kostin, who admitted some early nerves, didn't seem out of place trying to maneuver his large body towards and around the net, even crashing it with authority in the second period and nearly putting home a rebound past John Gibson. Kostin showed promising signs of being able to protect the puck and use his strong stature. Once he gets enough repetition at this level, he can display the skill and shooting ability that are rare tools for bigger bodies.

"A couple first shifts, (there were) nervous, and after, I was good," Kostin said. "... My linemates did all the work and I just try to score and miss the puck. It's the next level for me. I thought it's like a big step to come here and play my first game. Thanks (to the) coaching staff and the GM for giving me chance to play my first game."

"He was fine," Berube said of Kostin. "I thought for his first game in the NHL, he did a good job. I was happy with him."

Kostin, who replaced Jacob de la Rose in the lineup, wasn't asked to do too much, which wasn't a surprise considering Blues coaches simply wanted him to get acclimated and comfortable in the simplest way possible.

"Yeah, coach said play simple and physical," Kostin said. "That's what I try to do. A couple big hits."

Kostin was prepared for his debut; he was told Friday he would go into the lineup Saturday, which helped him prepare mentally.

"[Friday], I did a workout during the game and then gym coach tell you're going to play tomorrow," Kostin said. "Yeah, like first game always nervous."

Kostin's father, Sergei, was in attendance for his son's NHL debut. Rather than go and watch his clips after a game, or perhaps discuss his performance with his father, Kostin joked he had something else in mind at the time.

"Just take a rest and dinner first," he said with a smile.

Surely, Sergei brought up the first NHL game at some point after the game, and Kostin admitted it's a mix on whether his game is talked about or not.

There are no guarantees what comes next for Kostin, in his third year of pro, which included two-plus seasons with the Rampage, but one thing's for certain: now that the NHL debut is out of the way, Kostin can build off a solid debut.

"I think like if I'm going to play next game, I will be relaxed," Kostin said.