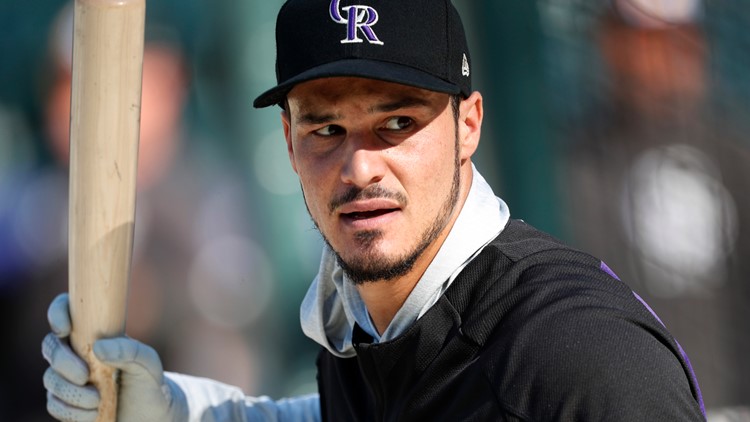 Opinion: Nolan Arenado could be the missing piece to a Cardinals' championship season

ST. LOUIS — Ever since Albert Pujols left St. Louis for the west coast eight-plus years ago, the Cardinals have been looking for that missing superstar to supply the kind of success on the field as well as the prestige away from it that Pujols provided for 11 seasons.

The search included huge offers for Giancarlo Stanton and David Price, both which were either not enticing enough, or just didn't have enough zeros on the check. They were never seriously linked to Bryce Harper, who signed a mega contract with the Philadelphia Phillies a year ago. While they weren't successful, the hunger in St. Louis' hunt does tell you they know the need is there.

Now, they did pull off a big trade in Dec. of 2018, trading for Paul Goldschmidt and signing him to a long term contract. Goldschmidt may have disappointed in some aspects during his first season, but he wasn't a slouch either. He could still produce 5.0 WAR for the Cardinals, but he is advancing in age at 32.

Nolan Arenado could be what the Cardinals have been looking for since Pujols left.

The lightning rod superstar that is still relatively young and capable of being the face of the franchise for the better portion of a decade. At 28 and coming off another season that included a combination of 5.9 fWAR, an wRC+ of 128, 40+ home runs, and a Gold Glove, Arenado is a true stud who may simply be entering the prime of his career.

Now, am I just creating juicy fluff or is there a true scent of a rumor attaching the Cardinals to Arenado?

According to Jeff Passan, St. Louis has intrigued Colorado with their potential offer and prospect list. The Chicago Cubs are also in the mix, which would not be a team to lose the bid to. Remember when the biggest fear with Pujols leaving was him going to the North Side? If Arenado puts on the small bears threads, they are right back in business.

So there is legit speculation and not just "the Cardinals are interested in Arenado" nonsense. We're all interested in a sports car, but do we have the actual means to acquire one. The Cardinals do, but it'll cost them.

Arenado is starting a new seven year, $260 million contract that pays him until age 35, when the National League should have the designated hitter and a superstar player making around $35 million should be a common trend in the league.

A big contract means Colorado could ask for the world, so you can expect a haul that includes at least four players.

Nolan Gorman or Dylan Carlson will be a headliner in the package heading west, and the Cardinals will hopefully try to add Dexter Fowler or Matt Carpenter into the mix. I don't think the Rockies can ask for the Cardinals' top two prospects in the organization, which is where Carlson and Gorman currently stand. But they can ask for one, and the Cardinals can send them Gorman, a future third baseman. We all know Gorman won't be as good as Arenado, so don't weep.

A very good outfield prospect will also be in the mix. While Tyler O'Neill will intrigue Colorado, they could ask for Lane Thomas or Randy Arozarena. Being that the Cardinals only have three outfield spots for what seems like six to eight young outfielders, they could afford to lose one or possibly two of their young crop. With prospects like #7 ranked outfielder Jhon Torres, the Cardinals still have plenty of firepower in the low ranks.

The Rockies are basically eating at the Cardinals' buffet here, so expect them to ask for a pitching prospect. While the team may balk on Dakota Hudson, they could offer Ryan Helsley, an intriguing young bullpen arm who could blossom into a starter if the opportunity arose.

Since the Cardinals would be supplying Colorado with three great prospects and are taking on all of Arenado's contract, they will send one of their anchoring veteran contracts along with the younger players. Fowler played many years in Colorado and put together a couple fine seasons, but I don't see the Rockies biting on that. Carpenter fits their bill a little more. He has two, albeit pricey, years left on his deal-but the Coors Field power profile could benefit his long ball ability. Carpenter can play third, second base, and first base as well.

Maybe there needs to be a fifth player, but these four could work. The Rockies could ask for a Major League ready outfielder like Harrison Bader, which would be completely fine due to Bader's struggling bat last season.

Now, Arenado does have an opt-out clause after the 2021 season, which could throw a wrench into the deal. But I don't see him walking from a deal that pays him very handsomely, even with the Harper contract. With bonuses, he could make over $40 million in some of these seasons. People thought Stanton would be crazy to opt out of his massive deal. I think the same applies with Arenado, but maybe, St. Louis gains leverage in the trade talks due to that hanging chad.

Now, I know what you are thinking. Arenado's splits aren't the most flattering. For his career, Arenado's OPS away from Coors is .799 over 2,169 at-bats. That's a lot less than his .995 OPS at home. He has hit 98 of his 227 career home runs on the road, and he slugs a robust .476 away from Colorado. This isn't like a guy going from a superb OPS to a downright rotten one on the road. Arenado, like most players, isn't as sharp away from Coors.

But that shouldn't diminish his potential value to the Cardinals, a team in dire need of a cornerstone talent. You shouldn't dismiss a guy who has finished with four Silver Slugger awards, made five All Star teams, and won a Gold Glove in each season he's played in the Majors.

Arenado's defense is a big part of the equation here that some fans simply look past or don't understand fully enough.

He was a premier fielder before he could slug. This isn't "he won a Gold Glove in one season" type of lucky play. Arenado is a Yadier Molina-level dominant defender at third base, someone who should remind you of Scott Rolen in his heyday, sliding into foul territory to gun someone down at first. He has saved the Rockies 117 runs in the field during his career, including a 10.3 Ultimate Zone Rating in 2019. The defense makes up for the worry in his splits.

Arenado doesn't strike out a ton, averaging over 100 but never getting close to 150. He will draw around 55-60 walks, and smashes 40 doubles per season.

The .546 slugging percentage over his career is sexy enough, but don't forget about the 100+ runs scored in each of the past four seasons. If there's something you wanted a baseball player to do very well, Arenado does all of it well.

He's what the Cardinals are still looking for. With no offense to Goldschmidt, who could rebound and be a force for at least 2-3 more seasons, Arenado could be a true centerpiece. Getting Goldschmidt was an excellent gamble by Mozeliak, but what if you could not only have one of the top ten hitters in the league, but two of them instead?

Think about it. Goldschmidt needs lineup protection. Arenado provides that in spades. He'd make every player in the lineup better.

The Cardinals can't afford to be outbid by Chicago here. If the Rockies decide to hold onto him another year, that's a fair loss. Just don't let him go to a rival who plays you over 15 times a season and will stand in your way for eternity. Something tells me Colorado wants to cash in on him before he reaches the age of 30, when the return haul will be considerably lower.

What about the payroll? If the Cardinals can send Carpenter over, the price can be handled for the next two seasons. After 2021, there are only a handful of Cardinals signed to current contracts. After Fowler and possibly Molina drop off the books in the next two years, there will be plenty of room. Arenado makes $35 million from 2020-2024, and then it decreases to $32 and $27 million for the final two seasons. There are bonus structures in place for top 5 MVP finishes, All Star appearances, and Gold Glove wins. If he's collecting those down the line, the Cardinals are collecting division titles, so don't sweat it. The contract expires when he's 35.

I think this is a deal St. Louis needs to seriously consider and push hard for. Run at this thing hard. The time to get bold is now. Winning the division and returning to prominence in 2019 was impressive and a fine start, but there's more to be done. The Cardinals were embarrassed in the NLCS due to a lack of offense. Arenado fixes that in an instant. If he's on the team in the NLCS, the Cardinals win at least two games.

He would complete the lineup in St. Louis for a long time. Think about it and try not to get too excited.

The chances of St. Louis actually landing Arenado are slim, but Passan doesn't mess around with his reporting, and I think the Cardinals are still on the prowl for that missing piece. Someone to elevate everything and sustain production for many, many years.

They missed out with Stanton and Harper, but could erase all the doubt with a Nolan Arenado trade.

What do you think, Cardinal Nation?