Commentary | The Yadier Molina Plan: How the Cards can respect a legend and manage their payroll

Molina says he wants to continue playing past 2020. A potentially uncomfortable situation for a playoff-contending team can be avoided. Here's how 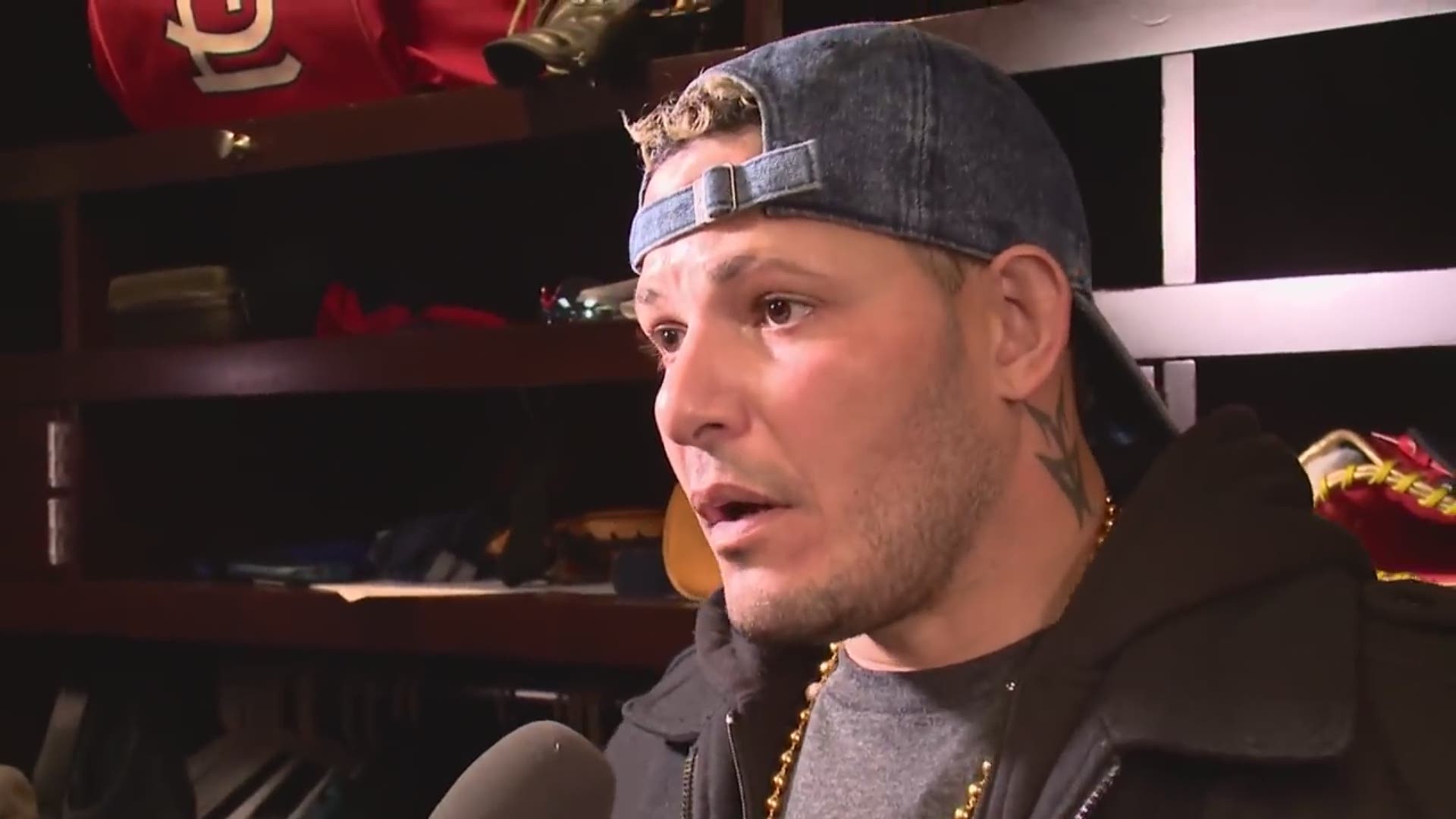 ST. LOUIS — Yadier Molina will retire a St. Louis Cardinal. There's nothing more set in stone in St. Louis sports than the red coat being placed on Molina, his statue out front and his place in Cooperstown.

But what happens between now and then could become uncomfortable for both the Cardinals and the player. Let's face it. The end of a long career always is. A legend with a legendary ego and a team that likes to take care of its veterans while respecting its future are about to have a small—or rather moderately sized—dilemma. While the outfield positions are decided by the team, a creeping distraction could take shape here in the new year.

Before we dig into the present, let's recap.

Molina has played in 2,081 games for the Cardinals, postseason and regular season taken into account. He's won nine Gold Gloves and helped the team win a pair of World Series trophies. All the while going from being a defensively-minded backstopper to a credible and sometimes very good hitter. The 48 home runs over the past three seasons alone show you how well he is holding up. The pitchers, fans and coaching staff revere him like the United Kingdom does Paul McCartney. Where he goes, everything stops around him.

Before the end of the 2017 season, Molina signed a three-year extension worth $60 million. Before the 2018 season could begin, the catcher made a seemingly surefire statement to the press about this contract being his last stand. This is it. After this one, he's done. Yada, yada for Yadier. But then, something changed over the past year and a half. Molina backed up those words, saying he'd be open to playing on past 2020.

Now, there are two theories as to why this happened. The first being that Molina wasn't keen on Carson Kelly taking over his spot. The young catcher was quickly becoming the next catcher in line, and perhaps Molina didn't care for that notion. I don't see this guy accepting a part-time position. Molina will retire before that happens—or lose his legs. One or the other.

The second theory is that the divide between Molina and former manager Mike Matheny had grown so large that Molina couldn't see himself playing past the contract. Matheny had gotten a contract extension a little over a year before, so he was locked in for the time being and could easily stay on after. At that point, it was possible. Matheny seemed to be a protected guy. He could slot Molina in as the closer and Bill DeWitt Jr. would convince John Mozeliak it was a good idea.

When Mike Shildt took over and Kelly was traded to Arizona, perhaps Molina changed his mind. The ninth Gold Glove could have sparked something in his brain, too. Maybe the caliber of the team and winning the division increased a desire to stick around. Catching Jack Flaherty during his Cy Young season would sound swell to me. A lot of things could have triggered a change of heart, but here's the question moving forward: what do the Cardinals do about an extension?

Molina is outrageously durable, playing in 130 games or more in three of the past five seasons. However, he's missed considerable time the past two seasons. Now, there is a disclaimer on one of those seasons. Molina took a Jordan Hicks fastball off his private region, which is thankfully a rarity. He's also suffered an absurd number of thumb injuries, the latest one occurring last season in May, an ailment that the catcher played with for weeks before finally taking a seat on the Injured List.

That brings into question the ability of the Cardinals to take control of the situation once Molina does start to lose rounds to Father Time. Molina was clearly not right for a matter of weeks last year. He couldn't drive the ball, slugging just .313 in June. He suffered the injury in May, was sidelined, but returned quickly. It was too soon. This has happened throughout his career. A far less than 100% Molina plays on against the team's best wishes. Seeing him be an Iron Man is an impressive sight, but that will become impossible as he turns 38 this summer. Can the team step in when the decline happens? Matheny couldn't find a way. Tony La Russa barely could do it. Will Shildt be able to? I'm not so sure.

Back to the contract. Due to the new Collective Bargaining Agreement, the Cardinals can't give Molina a huge pay cut if they extend him before his current contract expires. He would still make at least $16 million per season if a deal was worked out. The Cardinals will have to decide whether they want to go another year or two with Molina, but I am suspecting two years will be desired by the player. That would be two years/$32 million for a catcher playing at 39 and 40 years old. It's not wise to doubt Molina, but fairy tales just don't happen in this game.

Now, if the Cardinals decide to wait, that wouldn't be a good message going to Molina, someone who the team values like a lieutenant on the field. If the team asked Molina to play out his contract and see where the chips fell, an uncomfortable distraction could develop on an otherwise playoff-hopeful team. Just because Molina gets along better with Shildt doesn't make me think the good old Instagram account won't be put into action if a divide starts to develop between player and manager.

You see where I'm going here. We'd like the team to be more assertive with Molina's health and status, but if they do that, it could lead to areas nobody has been before. In a perfect world, Molina plays out the contract and takes a team-friendly deal. But I just don't see a pitch being thrown in the 2020 season without a new deal in place. Molina will come to spring training in impeccable shape, and show up before anyone else. He'll be taking pitches in the dirt, practicing his catch and throw and taking plenty of batting practice. I have no doubts he's coming to camp with the goal to play beyond 2020. Once again, the man demands excellence of himself and not an inch less.

So, the whole idea of Andrew Knizner and Molina sharing time just doesn't make sense to me. Molina will want to be the predominant catcher and as long as he performs up to task, I don't have a problem with that. Knizner is unproven but needs reps, but Molina is ... well ... Molina.

The Cardinals have three options: let the current deal ride out, extend Molina or restructure the current deal. Two of those are unlikely, so here's what I'd do. Offer Molina a one-year deal with an option for a second season. You could make the first year a guaranteed $20 million, and then make the option year $10 million before possible incentives jack it up to $16 million. This should keep you in the parameters of the CBA and keep Molina happy. The man gets paid and if his health holds up, stays for two more years. This would give him a 19-year career in St. Louis. That is a lot of money, but Knizner is controllable for awhile and salary will fall off the board. Flaherty and Hicks will be in their first year of arbitration next year, but there's currently only $110 million committed to the 2021 team. In 2022, Matt Carpenter and Dexter Fowler both fall off the roster, and there's only $65 million committed right now to that club.

This way, you don't completely disrespect one of your franchise's greatest players and manage to keep your future payroll intact. If he's still got it, the deal works. If not, you cut and run. I imagine the television money is rolling in, and the revenue around this team has never been higher. I'll trade some salary for a player of Molina's status. It's not often you could retire a pitcher and catcher combo like Adam Wainwright and Molina together on one team. If Molina's body starts to break down this season, you're only on the hook for one more season.

It's a tricky arena for the Cardinals to play in, but one they'll navigate carefully with someone like Molina. A guy who has taken on Pujols' status in this town and has the ego to back it up shouldn't have a Pujols-type ending. It's worth the risk to make sure this relationship ends in satisfying waters.

What are your thoughts?