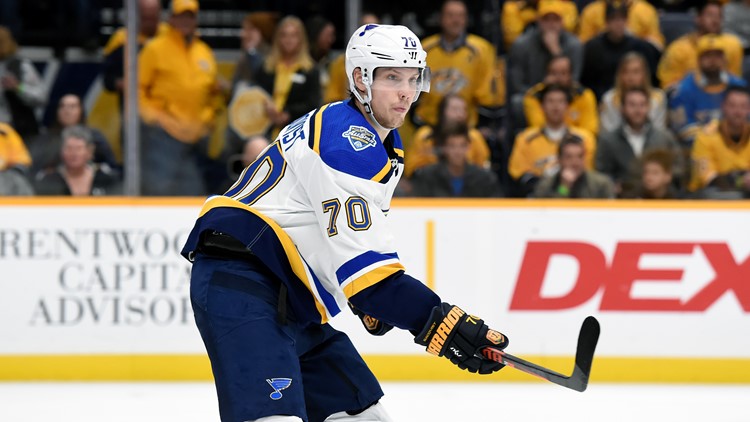 Competition will intensify with Sundqvist out for Blues

ST. LOUIS — One of the biggest factors contributing to the St. Louis Blues winning the Stanley Cup last season was a healthy team.

There were little stints when they were roughed up here and there, but nothing drastic.

This season, it’s much different. First, Vladimir Tarasenko went down to injury. Next it was Alexander Steen. Then it was Sammy Blais.

Blues forward Oskar Sundqvist began the game against Tampa Wednesday as hot as he could have. He tallied two goals early in the game to help keep St. Louis on top,

Then, in the second period, Sundqvist skated towards the boards, and took a hit from Tampa’s Luke Schenn. But, it was an odd hit. Sundqvist had tried to avoid the full blow. Had he absorbed the entire hit, the outcome may have been different.

The Swede was placed on the injured reserve and will miss a chunk of games for the time being. The specifics of the injury have not been released and Sundqvist is expected to be reevaluated when the team returns to St. Louis.

Regardless of the adversity the team has faced due to injury, they’ve still found ways to win this season.

Because of the injuries, players like Ivan Barbashev have been given more ice time on a nightly basis.

On Wednesday this resulted in him tallying his first three-assist game. And guess who scored one of the goals on one of his assists? Zach Sanford. Another player who’s been battling for more ice time, and a full-time position in the lineup.

On the other hand, the injuries present top-tier opportunities for players like Nathan Walker, and Austin Poganski who was recalled from San Antonio in the midst of the madness.

Poganski has 13 points and six penalty minutes this season in 21 games.

The competition to play in the lineup as an every day player just got much tougher.

RELATED: Blues suffer another injury as Sundqvist heads to IR