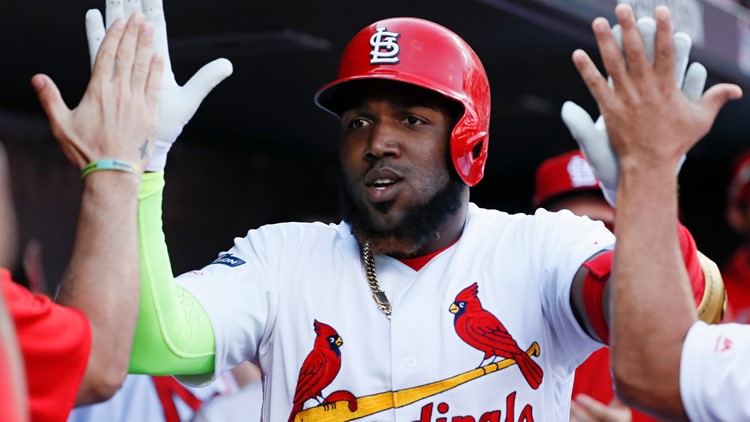 Craig Mish on Marcell Ozuna: 'The Cardinals are a fallback option'

"It would be really surprising to me for Ozuna to return to the Cardinals on a one or two year deal."

In the case of the St. Louis Cardinals and former outfielder/free agent Marcell Ozuna, the slope is rather tricky but there is legitimate intrigue located in this particular valley.

Ozuna was traded to St. Louis two years ago, and performed well during his time here. While he never came close to his majestic 2017 season in Miami, Ozuna put up solid power stats and offered the Cardinals 5.4 fWAR the past two years combined, which is nothing to snooze at. But they didn't make much effort to engage in extension talks last year, and don't want to hand out a 4-5 year deal to Ozuna, which is what he desires.

In order to get to the bottom of it, I talked to Mish, who covered Ozuna in Miami and always has his ear close to the ground floor in the offseason.

KSDK: Why haven't the Cardinals aggressively engaged Ozuna in talks just yet?

Mish: The Cardinals believe that Carlson is an everyday player or close to it. They have a good track record with outfielders in their first couple years. You can go through (Stephen) Piscotty, (Randal) Grichuk, (Harrison) Bader. They have success coming through system and performing at a high level for a year or two, but they can't maintain that.

My guess is they feel very confident is that Carlson can play every day. They do have other alternatives, but none of which will match the production of what Ozuna can do. I think the Cardinals feel like they have good options in house. They're basically playing this game of chicken, daring Ozuna to get a better deal elsewhere.

KSDK: What is the viewpoint from Ozuna's perspective?

Mish: From Ozuna's perception, the Cardinals are a fallback option. They are not his primary option. For the Cardinals to make Ozuna a priority, that should have happened when he was playing for them. Now he has his choice of where to play.

KSDK: Are there any other threads that could describe the halt in Ozuna finding a team?

Mish: The reason why Ozuna switched agents last year was because of some advice that he could get a long term offer with the Cardinals before hitting free agency. He pretty hastily let go of Scott Boras, who takes all of his players to free agency. Ozuna was convinced to not let that happen, and now he is in a similar predicament. I still think he'll end up getting the long term contract he wants, but I wonder what would have happened if he stayed with Boras, who is undeniably having the best offseason of any agent in history.

KSDK: When Ozuna was traded to St. Louis, you told me it was a big get for the Cardinals. How would you evaluate the deal today?

Mish: Offensively, you had to expect some regression coming off the 2017 season he had in Miami. I still thought he would be better in St. Louis, but I think his offensive production has been well above average.

What's really been a surprise for me is the defense and issues with his shoulder. That's not something I could have anticipated, seeing it regress so much. That's playing a factor in his free agency, like whether or not he'll be a viable outfielder in three years.

KSDK: Chips are down, where do you see Ozuna ending up?

Mish: I'll say what I've said for the entire offseason. It probably applies to every player. Ozuna's destination is where the most amount of money is being offered. Geographical location or former teams have nothing to do with it. If the Cardinals came in with the most money, he'd return to St. Louis. Now, seeing the way the defense has gone, I would be apt if I were an American League to give him the 4-5 year contract. You'd know he'd be an excellent designated hitter at the very least.

KSDK: Perhaps the qualifying offer and draft pick is in play here...

Mish: The issue with Ozuna is when you have that draft pick attached to you, it's a factor for teams looking to sign him. Those draft picks are worth potentially $300 million. The control of a player for six years for a nominal salary ... would you give that up for Ozuna? For a lot of teams, the answer is probably no.

KSDK: Let's say the Cardinals retain Ozuna. With him, their offense last year was problematic to say the least. Will that be enough for them to repeat as division champs?

As of right now, they're a favorite. I like their position. They will count on performances from last year, which they always do. This is what the Cardinals do. They get these surprise performances that you wouldn't expect, but then the question becomes, can they repeat that performance and get better? That's where the issue has been with the Cardinals. They get that boost from Piscotty, Grichuk, Aledmys Diaz, etc. They catch lightning in a bottle, but the second or third year doesn't go as planned.

You could say the Cardinals and Ozuna are sitting at a poker table in a classic stare-down, seeing who blinks first. St. Louis has a need in the outfield, but they have in-house options that need a look.

With the trade with Tampa Bay sending Jose Martinez and Randy Arozarena south, the clog in the outfield has cleared up a bit. But Ozuna is a proven producer, someone Steamer on Fangraphs is projecting to have 3.1 fWAR along with 33 home runs and a 117 wRC+ (weighted runs created, 100 is average) in 2020. Can the Cardinals get by without that, or count on Tyler O'Neill, Lane Thomas, or Dylan Carlson to do that?

According to Mish, Ozuna may have gambled a bit in the past year, but he still controls his destiny and that destiny still revolves around one that has the most zeros. The Cardinals are also gambling, hoping their internal youngsters are up to the task if they pass on Ozuna one last time. A phone call changes everything here, but could it be too late for St. Louis? More importantly, can they get their man at their price?

January may be a boring month at the movies, but it can be a thrilling one in the world of baseball.