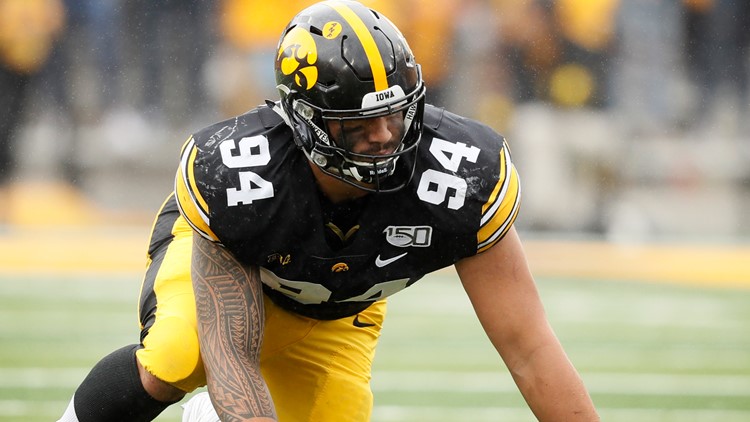 Photo by: AP
Iowa defensive end A.J. Epenesa gets set for a play during the first half of an NCAA college football game against Middle Tennessee, Saturday, Sept. 28, 2019, in Iowa City, Iowa. (AP Photo/Charlie Neibergall)

Iowa defensive end and Edwardsville, Illinois native A.J. Epenesa is entering the NFL draft after two of the most dominant performances of his career.

Epenesa posted his decision on his Instagram page. He says his time with the Hawkeyes was everything he hoped it would be.

Epenesa was an Associated Press second-team All-American and an AP All-Big Ten first-team pick. He is the first Iowa player with double-digit sacks in consecutive seasons since 2002-03.

Epenesa was a three year starter in college, racking up 26.5 sacks during his time at Iowa. He is projected to be on of the first names off the board in the 2020 NFL draft.

RELATED: St. Louis could make a big splash at the Pro Football Hall of Fame in 2020