“I was one of those kids. And just to see myself influence those kids and being a role model to those kids is crazy," Liddell said. 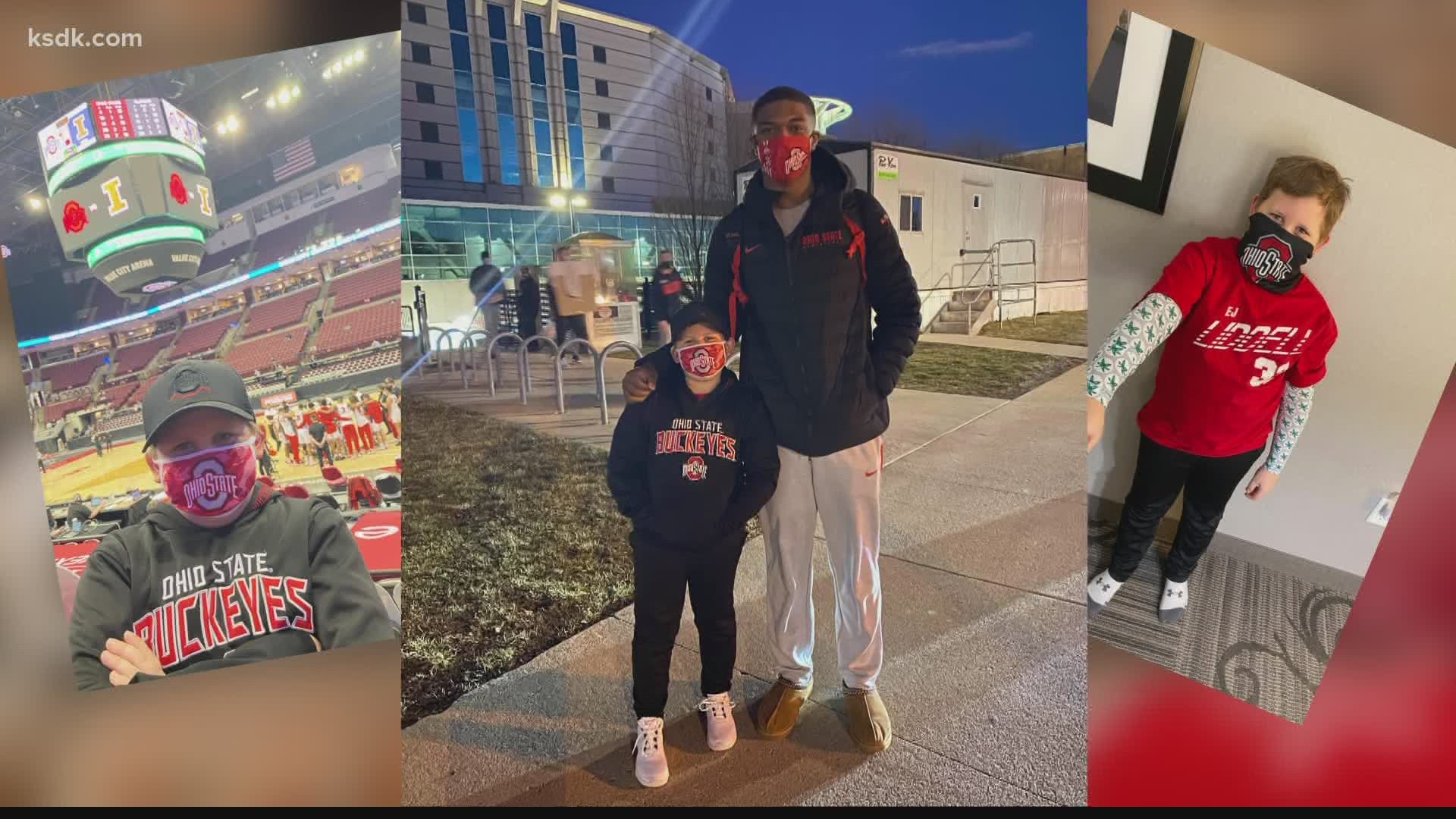 RED BUD, Ill. — Ohio State forward and Belleville West alum E.J. Liddell has been in the news lately for reasons nobody should be.

After his Ohio State Buckeyes were upset in the first round of the NCAA Tournament by 15 seed Oral Roberts, Liddell became the subject of online threats and hate messages.

On Twitter Liddell wrote, "Honestly what did I do to deserve this? I'm human."

The former Belleville West Maroon has plenty of people back home who have his back, and know exactly what kind of human this budding superstar is.

Perhaps nobody quite exemplifies what kind of person Liddell is more than 10-year-old Bentley Kreher from Red Bud.

In the Kreher household, rooting for Ohio State is more a way of life rather than simply a rooting interest. You may even say it's somewhat of a birthright to uphold the family tradition.

“Our children have not had much of a choice," Ashley Kreher, Bentley's mom, said laughing. "Bentley came home from the hospital in an Ohio State onesie.”

And for Bentley, the Buckeyes have become everything.

This fourth-grader is committed, too. He doesn't miss a single football or basketball game. Not a one.

“If I’m not really there to watch it because we have something going on it’s always recording so that when we get home I can watch it later or the next day," Bentley said.

But a few years ago, 7-year-old Bentley was going through a rough patch.

In a short period of time Bentley lost a grandma to cancer, a grandpa to a farming accident and his father suffered a serious injury at work that required intensive surgeries.

Bentley needed something to feel good about again, so his aunt took him down the road to Belleville West, to watch a then-prep phenom in action: two-time Illinois Mr. Basketball and two-time state champion E.J. Liddell.

Liddell had been considering Bentley's favorite school of Ohio State for college, but hadn't made an announcement yet.

Afterward, without knowing about Bentley's recent tragedies, Liddell made time for the excited 7-year-old, signing a program and taking a picture.

“There was a lot of accidents going on and meeting him was just super cool," Bentley said. "He was just super nice. And he really didn’t have to do it and he still did and I thought that was super cool.”

Of course, Liddell did pick Bentley's favorite school of Ohio State, where this past year he was picked as a member of the All-Big 10 first team.

Liddell's star may have only continued to get brighter, but he hasn't forgotten his first big fan, Bentley.

Liddell surprised Bentley for lunch on a trip back home from Ohio State and sent him a special birthday message this past year when the Krehers knew they couldn't throw a normal party for their son because of the COVID-19 pandemic.

The Liddell family also helped the Krehers come up to Columbus to see E.J. play in person this season, and the two got to connect again.

For Liddell, being a role model just comes naturally when it comes to the kind of man he wants to be and how he carries himself.

“I make all my decisions about being a role model by just being me. And I’m really not going to change who I am, and that’s why people love me so much… So I’m just going to keep being me," Liddell said.

“You can be a great athlete, but you don’t have to necessarily be a nice human. And he is just a really nice human," Ashley said.

Liddell is just a sophomore at Ohio State, but there's no doubt he's bound for the NBA soon. There's also no doubt his biggest and first fan will follow him no matter where he ends up.

"I’ve watched every game. And right now I’m a Golden State Warriors fan, but wherever he goes I’m going to switch," Bentley said.

“I was one of those kids. And just to see myself influence those kids and being a role model to those kids is crazy," Liddell said.