Growing chemistry between O'Reilly, Perron starts with trust in one another

The chemistry between Ryan O'Reilly and David Perron was on full display during the Blues' 5-4 overtime win over the Detroit Red Wings on Sunday night.

DETROIT — When teammates have a certain thing going, when they talk about chemistry playing together, the one key factor that comes to mind when that mojo is going at its best: trust.

David Perron and Ryan O'Reilly have it, and that exuberance continues to grow. 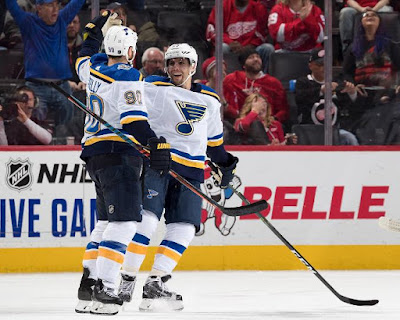 The duo each put up four-point games in a 5-4 OT win over the Red Wings.

It was on full display at Little Caesars Arena during the Blues' 5-4 overtime win over the Detroit Red Wings on Sunday night.

O'Reilly tied it late, and Perron won it with an overtime goal 1 minute 28 seconds into the extra session, a pinpoint snipe, a wrister from the left circle high short side past Perron's junior teammate, Jonathan Bernier, with Lewiston in 2006-07.

RELATED: Blues didn't wilt after losing Tarasenko; in fact, they elevated their game

RELATED: Opinion | For O'Reilly, goals will come by being more selfish

"Yeah, I think so. Even his goal, the first one, he's driving through and he's trusting that if I give him the puck, he won't get blown up by the next guy and he went in there," Perron said. "I had a good angle of it, he didn't have much room and he put it crossbar and in, so that was a really good shot by him."

There good vibes were working in high octane Sunday. As Perron mentioned, he threaded a pass into space for O'Reilly for him to skate into the left circle and snap a shot high short side just like Perron did to Bernier in overtime.

"He's played a phenomenal game and he's played phenomenal this year," O'Reilly said of Perron. "He's such a threat. Not only can he shoot or one-time anything that comes to him, but also he can make little plays. He's got great vision. He's been a huge spark for our team offensively with what he's been creating. Tonight with a huge goal to get us that extra point and feel half decent coming off the road."

Perron is on pace to break his season totals in goals and points. His previous high in goals was 28 with Edmonton in 2013-14; his best season in assists is 50 with Vegas in 2017-18, and his top mark in points is 66, also with the Golden Knights two seasons ago.

Perron is on pace for 41 goals, 41 assists and 82 points. It has captain Alex Pietrangelo, teammates with Perron for all three of his stints with the Blues, feeling Perron is playing some of his best hockey.

"Yeah it is," Pietrangelo said. "I think he really found his game, especially these last couple years with 'O'Ry', they've really kind of meshed together well playing the game that they want to play."

"With his work ethic and all the things he does throughout the game, whether people see it or not, defensively too, he's going to find a way to score," Pietrangelo said of O'Reilly. "He's going to score goals. Sometimes it's just how it goes. Sometimes they come in bunches. We're not too worried about it."

O'Reilly came into the game with one goal, an empty-etter in Ottawa, but was glad to get that monkey off his back.

"Absolutely. It's nice to contribute something at least," O'Reilly said. "Obviously been struggling to have numbers, but even making plays, it was finally nice to connect with our line just moving the puck well, getting opportunities. We were in the o-zone and got rewarded tonight. It's something we've got to keep building on for sure."

Blues coach Craig Berube will always play O'Reilly and Perron together. The looming question will always be who will be their linemate. It's been Sammy Blais, Zach Sanford, and Alexander Steen. And with a twosome joined at the hip with a strong trust in one another's game, it's an easy call for the coach to make.

And with top scorer Vladimir Tarasenko currently sidelined with an upper-body injury, the Blues will need these high-end players to keep making things happen. 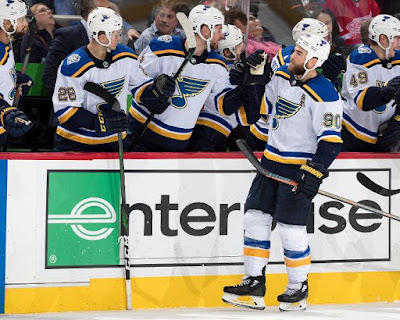 "Yeah, for sure and they know where each other is at on the ice all the time," Berube said. "We put Sanford there tonight. That line's been good at times obviously the last year. It worked out, they were good tonight."

"We have good chemistry," Perron said. "I think all the plays tonight that ended up in a goal for us as a line, they were all just off chemistry basically and trusting that the route that you're taking is going to be the right one."

So far on most nights, it has been the right one.