He made one of the most famous plays in Super Bowl history. 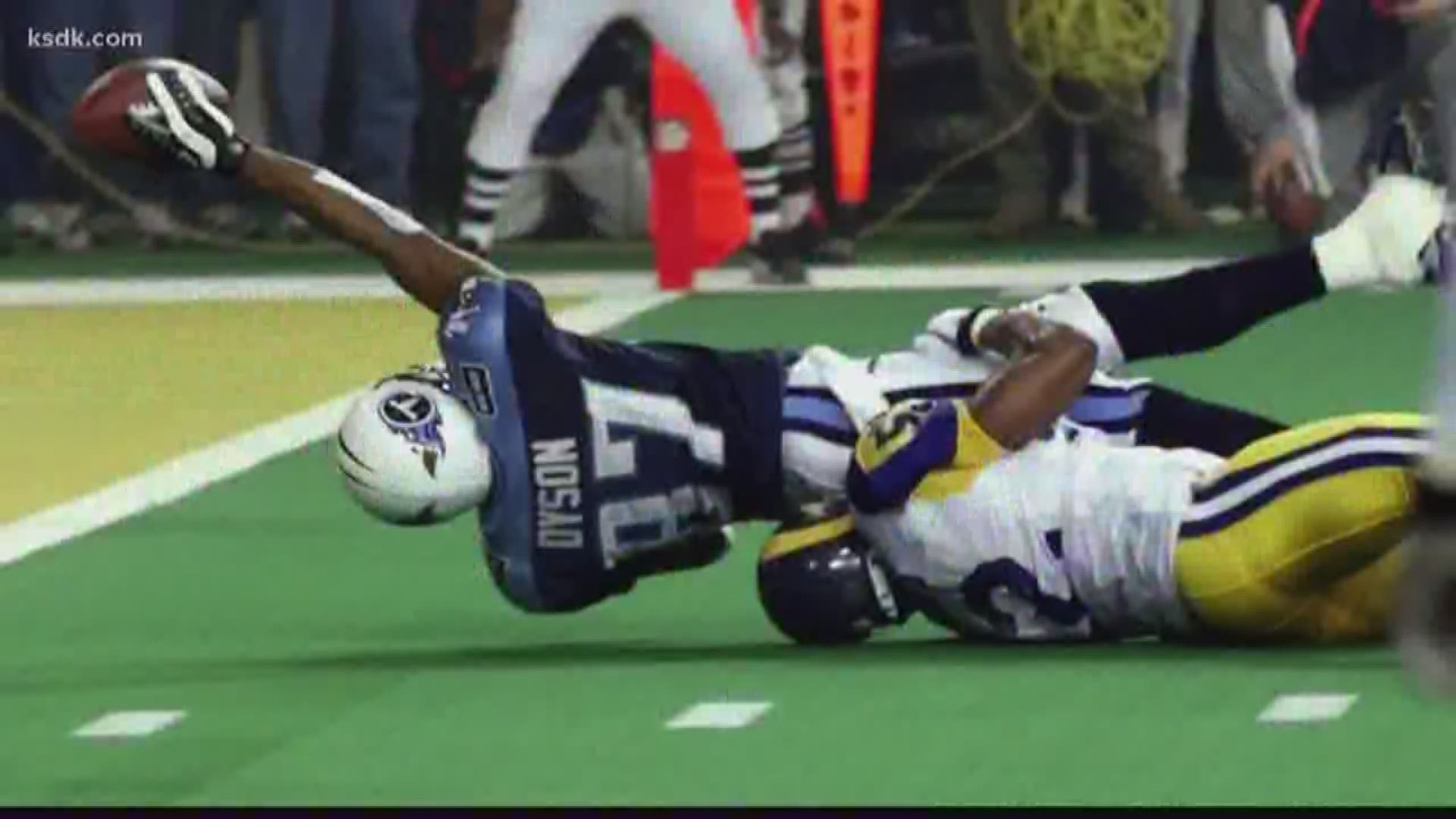 ST. LOUIS — It is one of the epic plays in St. Louis sports history.

As we delve into the great moments that are part of our new series, “The Turning Point,” it doesn’t take long before coming to perhaps the singularly greatest moment in the two decades of the St. Louis Rams.

What a turning point it was.

Most of this region’s memories of the Rams are not good, but we had our moment in the NFL sun the year Dick Vermeil, Isaac Bruce, Marshall Faulk and some guy named Warner took the team from worst (4-12) to first (13-3).

But all of that washes away if it wasn’t for 'The Tackle'. What’s the point of getting to the Super Bowl if you’re not going to win the darn game?

Super Bowl XXXIV was a terrific contest, made all the more memorable for coming down to the last play. And for the Tennessee Titans, coming up one yard short.

The unassuming former University of Missouri linebacker can’t go anywhere without someone mentioning “The Tackle.” He doesn’t get his name mentioned without “Author of the Tackle,” immediately following.

It was the turning point of a franchise, setting up the greatest era in this city’s link to the NFL: The Greatest Show on Turf.

Funny that in an era of pinball machine-like scoreboards, footballs flying through the air, and records set by the bushel-ful, this moment came together thanks to a play made on defense.

So what was going through the mind of Mike Jones with the game seemingly headed to overtime?

With good reason. The Rams had seen a 16-0 lead slip away as the Titans pulled even with 1:56 to play. They had scored on three successive possessions, taking nearly 17 minutes off the clock in doing so. By comparison, the Rams had only eaten up 1:06 in the two possessions in between. So collectively, the Rams defenders were gassed.

RELATED: During a record-breaking season, the Marquette Mustangs have a special inspiration

In a drive that began at their 12, Jeff Fisher’s Titans went on another march. On the game’s penultimate play, quarterback Steve McNair had shed tacklers and bought time for Kevin Dyson to get open. McNair left Kevin Carter and D’Marco Farr in his wake as he gunned the ball for a sixteen-yard completion to the Rams’ ten. Fisher called Tennessee’s final timeout with six seconds to go.

“It all comes down to this,” Rams play-by-play announcer Mike Bush told the radio audience.

We’ll let Jones pick it up from there.

“We go into the huddle. I’m the signal caller. It was 77 Blast. It was a combination coverage, based on what they line up," Jones said.

The way the final sequence played out was part scheme, and part intuition. The thought process began when Tennessee tight end Frank Wycheck and receiver Kevin Dyson lined up on the right side of the Titans’ formation, to the left side of the Rams coverage.

Jenkins called for a match-up coverage to counter the Titans formation. Cornerback Dexter McCleon, safety Jenkins and linebacker Jones in a zone coverage on the Tennessee duo.

“McNair will work out of the shotgun,” Bush described. “He is back to throw.”

Jones walked 5 On Your Side Sports Director Frank Cusumano through what came next.

“When the ball is snapped, I’m covering Wycheck,” Jones said, “But I’m looking over your shoulder at the guy (Dyson). If he goes underneath I’ve got to tackle him. Everyone thinks I don’t see him, but I see him the entire time because I’m looking through his (Wycheck) shoulder to see Kevin.”

And sure enough, Dyson cut underneath, slanting toward the goal line. McNair watched the cut and then fired the pass.

“He’s got Kevin Dyson," Bush said on the call.

"Dyson reaches for the goal line. NO!," Bush said on the call.

“Did you know that he fell (short of the goal line)?," Cusumano asked Jones.

“Yes. I was just afraid when he reached out, he might have reached out and gotten it extended and they didn’t see it," Jones said. "I’m looking at the official to see what the call is. He looks, and then he goes like this (crossing his arms back and forth), no, he didn’t get in. And that’s when I knew that we had won.”

“Time runs out and that’s it! The Rams are the world champions!," Bush finished his call.

With a little coaxing, Jones got down on the turf on this November day as he was on that January night in 2000 and demonstrated what came next.

“I see him not make the call and so I hop up. I did it a lot faster because I was a lot younger and I was like, ‘All right, we won the game.’  But I was just so tired," Jones reenacted.

Jones said fellow linebacker Lorenzo Styles, who was not in the game, was the first to greet him.

After Jones left the NFL after the 2002 season, he went into coaching. That play that was the turning point of a franchise. It was also a turning point in his career that he can use as he helps mold the young men on his team at SLUH. And he knows it.

“I played a game that I dreamed of playing as a kid,” Jones said. "Now I’m coaching and getting an opportunity to show these guys some things, hopefully that they’ll take away in life and do well as well.”