Even if they don't bring back Marcell Ozuna, the Cardinals won't be short on outfield options. Thomas? Fowler? Carlson? Who do you want to see on opening day? 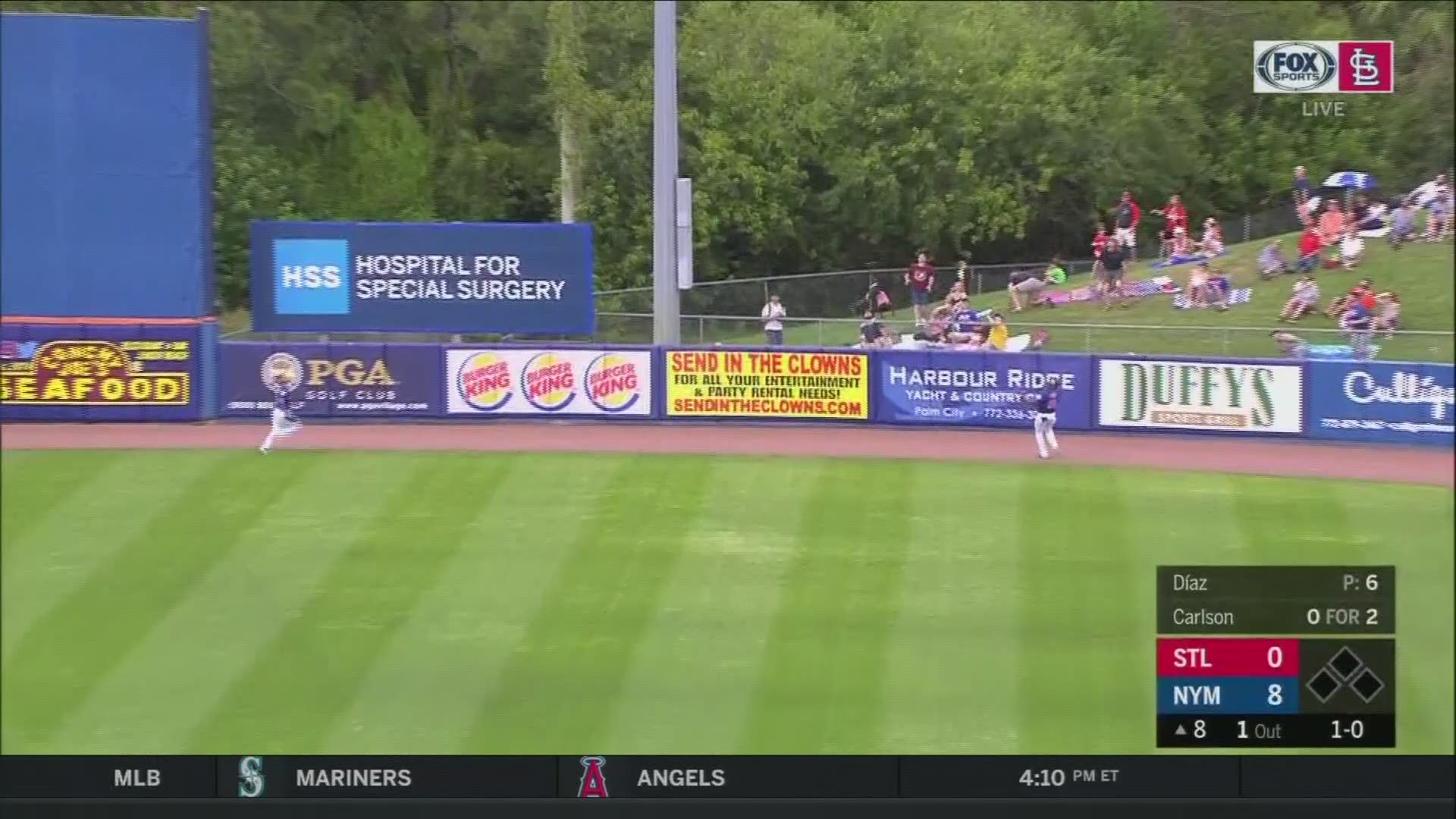 ST. LOUIS — It might still be November, but it's never too early to start thinking about the 2020 Cardinals season.

As spring inches closer, the debate about the Cardinals' outfield is only going to get hotter.

Yes, it appears unlikely we'll see Marcell Ozuna back in St. Louis, but even without "The Big Bear", the Cardinals won't be short on options in the outfield.

Let's take a look at the candidates, and what's working for and against them to be in that opening day lineup.

What's working for him: He was more than impressive in the minors last season. In 92 games at Springfield and Memphis, Arozarena hit .344 with an OPS of 1.003.

He's also one of the fastest players in the Cardinals' system. He stole 17 bases in the minors in 2019 and was often used a pinch-runner once he was called up. Given how much the Cardinals ran last year, Arozarena's speed could be a big plus.

He's also got some sneaky power.

What's working against him: Cardinals manager Mike Shildt seemed reluctant, to say the least, to use Arozarena as a starter last season, and he only appeared in 19 games.

While they didn't seem to mind using him late in games in other situations, all signs point to the Cardinals keeping Arozarena on the bench if he cracks the St. Louis roster.

What's working for him: All he does is hit. In the NLCS against Washington, Martinez was really the only guy who showed up. And he didn't even start until Game 3. Martinez takes some of the most competitive at-bats on the Cardinals' roster and has proven to be a clutch situational hitter.

He's got the best outlook and attitude on the team. Although he'd love to start, Martinez will take any role you throw at him, and be ready to perform every day.

What's working against him: He is a defensive liability. Jose Martinez is the perfect designated hitter. But once you stick him in the outfield, it hasn't been pretty. Martinez was a -0.3 WAR player in 2019 because of his defense. He was a minus 12 in total zone fielding runs above average.

One of Mike Shildt's biggest impacts on the 2019 Cardinals was his ability to turn them from one of the worst fielding teams in baseball, to one of the best. Martinez in an every day lineup definitely hampers that.

What's working for him: He can play anywhere. You might be surprised to see Tommy Edman on this list. I mean, he's a third and second baseman, right? Well, if Matt Carpenter and Kolten Wong are still locked in at their positions come 2020, where does that leave Edman? He made one heck of a case in 2019 that he has to crack the lineup on a consistent basis. If the team is confident Matt Carpenter is going to bounce back, but still want to get Edman in there, the outfield is where they'd look next. After all, he did log 82 innings there in 2019.

He's also a spark plug. He doesn't take many walks, so putting him at the top of a lineup could be risky, but Tommy Edman proved in 2019 he can add some excitement to the roster. He hit .304 with 11 home runs and an OPS of .850. The guy can obviously hit big league pitching.

What's working against him: He's blocked by other guys with more experience and bigger contracts. Matt Carpenter is going to get the first shot at reclaiming third base. That's a good bet. Would the Cardinals really move him out of position to start him? Maybe not. Maybe they'll view him as an insurance policy if Carpenter doesn't perform or if they'd look into dealing Kolten Wong.

What's working for him: He has the most power of anyone in the Cardinals' system. The dude is jacked and can hit baseballs as far as it looks like he can. We've seen how destructive he can be for stretches, and it can carry a team.

He's one of the fastest players on the roster. That may come as a slight surprise because he's so bulky, but O'Neill can fly both on the base paths and in the outfield.

What's working against him: Whenever he's gotten at least sort of an extended look, he's been incredibly streaky. In the middle part of July in 2019, O'Neill carried the Cardinals, launching four home runs in the span of five games and starting in the outfield for a few weeks. But it didn't last. Injuries or ineffectiveness have always cut O'Neill's impressive stretches short so we don't really get a complete look at him as a starter.

He also might be one of the team's top trade pieces. It's hard to pass up power like that in 2019, and the Cardinals might decided to dangle that out there and see if anyone will bite.

What's working for him: He looks like a star in the making. He just turned 21, but has set every level he's played at on fire. Last year at double and triple A Carlson was unstoppable. He hit 26 home runs, hit .292 with a .914 OPS over 92 games. At Memphis he was on another level. He had 11 extra base hits in just 18 games.

What's working against him: He's still so young. Carlson has only played three full seasons in the minor leagues. He's impressed, but the Cardinals have shown they are in no rush to get their top prospects to the majors. They're going to wait until they know Carlson is ready. As fans, it's easy for us to look at the numbers and say, "Get him here now", but that's typically not how the Cardinals make their decisions. But whether it's in 2020 or later, I'm betting on Carlson to eventually live up to the hype.

What's working for him: If not for an unfortunate injury, we probably would've seen a lot more Lane Thomas in 2019. In just 38 at-bats Thomas hit four home runs, drove in 12 runs and had an out of this world 1.093 OPS.

He's got all the tools. I think the Cardinals would be confident in Thomas playing any outfield position. He projects as a guy who could hit for both power and average, which is something this lineup could certainly use.

What's working against him: He's not Harrison Bader in the outfield. While Thomas might be a very good outfielder, he's not quite Harrison Bader. Mike Shildt has shown just how much he loves Bader in center field because of the next level defensive ability he brings.

He was impressive in his limited time in 2019, but that's just it. It was limited. It's no fault of his own, but perhaps the Cardinals would like to see him on the roster in a complementary role for a bit longer before fully giving him the starting reigns.

What's working for him: He really is unmatched defensively in center field. The stats back it up. Bader was second in all of baseball in ultimate zone rating, and fifth among all outfielders in defensive runs saved. He impacts a game in the field as much as maybe any player in baseball. The Cardinals and Mike Shildt have shown how much they emphasize defense, and Bader is the poster boy.

What's working against him: He has struggled mightily at the plate, especially with offspeed and breaking pitches. Bader hit .149 against curveballs and .186 against changeups in 2019. He hit .255 against fastballs and .313 against sliders last year. He had some stretches of nice games last year, but was also demoted. Just how much will the Cardinals continue to value that defense if the offense can't get back to at least league average?

What's working for him: He's got the big contract. The Cardinals aren't just going to give up on Fowler. He's got two more years left on his five-year, $82.5 million deal. He's going to play.

Mike Shildt has been loyal to him all the way. Fowler and Shildt seem to gel much better than Fowler and Matheny. There's a genuine relationship there, and Shildt wants him to succeed.

Fowler's 2019 was encouraging a lot of the time. The final numbers aren't eye-popping and his September and October was abysmal, but overall it was an "ok" year for the veteran. He did tally career highs in home runs and RBI.

What's working against him: He's the oldest guy on this list, and the young guns are nipping at his heels. Fowler has the contract, but this is the most competition he's ever had to hold onto his job. Maybe the Cardinals start to overlook that contract and decide it's time to give a Thomas, Carlson or Arozarena a chance.