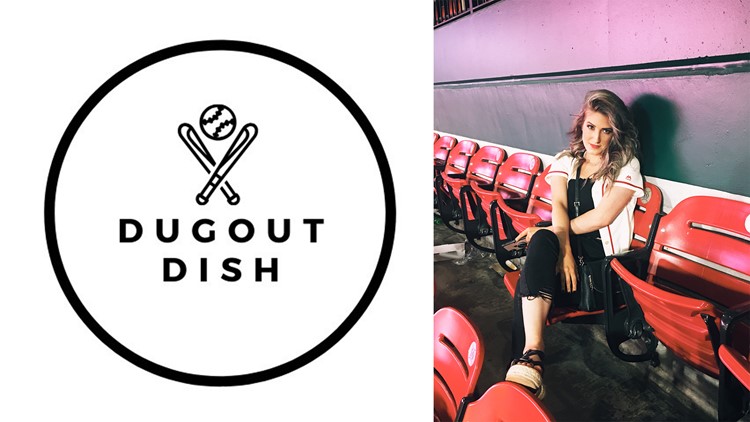 ST. LOUIS — You can thank Kirk for Dugout Dish.

It was the sudden death of Chelsea Ladd's dog that led to her creating the breakout St. Louis Cardinals-centered website. In order to cope with the passing of Kirk, who suffered a blood clot that went to his brain unexpectedly, she threw herself into the two other things that were a huge part of her life: baseball and writing.

"Baseball has always been the one sport that owned my heart, even as a little kid. So in order to cope with Kirk’s horrific death, I began focusing on baseball again," Ladd, 28, said. "Writing has always been a coping mechanism for me. When I’m down or something is weighing heavily on my heart, writing is my go to. So naturally, I began to write about the sport I loved."

While Kirk was the inspiration, an impromptu decision during a camping trip with her parents in July signifies the moment Dugout Dish became a reality.

Ladd was merely trying to find reception off the Kentucky Lake to check on the Home Run Derby while roasting marshmallows when she sprung the idea on her mom about creating a website.

"I had found IBWAA (Internet Baseball Writers Association of America) on Twitter and I told them that my goal was to join and have my writing reach people. I told my parents that I was also changing my major in college from pre-nursing (the third time) and going for journalism. Happy vacation, right?"

RELATED: Opinion | When it comes to Dexter Fowler, it's best to keep expectations low

You see, Dugout Dish wasn't just a newfound hobby for Ladd, but a career-changing and life-altering decision. Thankfully for Ladd, she was already ingrained in the sport. She could write about baseball all day and night, something that may wear on her folks at times.

"I would write about the games and I’m pretty sure I watched every game possible. Even teams that I don’t really like. I’m pretty sure I drove my parents and friends nuts by like May. And my mom can name every member of the Cardinals, Brewers, and Mets because of this," Ladd said.

If you were expecting to hear about about fond memories watching the Cardinals play at the old Busch growing up, think again; Ladd grew up a hardcore New York Mets fan. She may have grown up close to St. Louis, but the city unfortunately didn't have Mike Piazza. The Hall of Fame catcher helped power a passionate connection that was 18 years strong until a fateful afternoon in July at Busch Stadium.

At Christian Day at the ballpark, Ladd, who is really big with her faith, used a Paul Goldschmidt quote that served as the title of her first post for Dugout Dish. "Jesus Loves Baseball" was when the website became a reality, when a "vacation pipe dream" turned into a new team to root for.

As it turns out, the Christian Day article hooked a reader. Rachael Ren knew Ladd had something special, and through the power of Twitter, the two women joined forces and created a piece for Dugout Dish breaking down the Houston Astros and the Washington Nationals during the World Series and then started a weekly podcast.

When I asked Ren about what makes writing for the Dish so special, the collaborative efforts stuck out. "The best thing about writing for Dugout Dish is the fact that it’s always a collaboration. We bounce ideas off each other," Ren, 21, said. "We work together to make whatever we put out the best that we can. Nothing that is published is done halfheartedly."

For these two women, it's more than just a sports website. While they both love the game and don't want to do anything halfway, the website has developed a therapeutic escape for them. " It’s always a dance between Dugout and life and it’s nice to be working with a friend who understands that. It’s a team where we lift each other up which helps make Dugout great," Ren said.

Part of what drew me to Dugout Dish was the fact that it was created and developed by a woman. It's something I believe the sports world of journalism needs more, and it's something Ladd wanted to make prominent during the undertaking.

"I wanted to make it very clear from the beginning that Dugout Dish was completely written and ran by a woman," Ladd said. "My opinions, my views, and my knowledge are not and should never be hindered because I am a woman. I want to be someone that young girls can look up to."

Growing up, Ladd couldn't really look up to any individual female sportswriter because there were so few. She hopes to change that with Dugout Dish, one article at a time.

"The female voice is still so soft in the baseball industry but there are so many loud and brilliant women pushing down doors every day and finding themselves amongst the males in this dominated industry," Ladd said. "It is such a beautiful thing when I find more female sports writers on social media. We’re like a club that supports one another."

While Ren didn't initially join Dugout Dish just to carry the torch for female sportswriters, she does recognize the power of what they are doing.

"We want other girls to see pieces of themselves in us to show them it can be done. Representation matters. If you love the game, you can write about it. You can create content. You can do it all," Ren said. "You can be a girl and you can love sports. You don’t have to separate the two."

If Ladd and Ren have their way, it won't be so surprising to see a woman start a baseball website; the practice will be common and all about the content. And it was the content that drew me to the website initially.

It was a September article about Paul DeJong that caught my eye. "The Best Kept Secret Shortstop In the National League" was the article, but it wasn't just any article. One must understand that on any given day, a hundred articles could surface about a team and their players. There was something about the way Ladd wrote about the Cardinals' shortstop that was refreshing. It wasn't stats overload or too subjective. She talked about his defense and hitting, but also touched on his scholastic achievements and off-field language barrier work with players like Yairo Munoz. Via Ladd, I was getting to know DeJong all over again.

It was DeJong that served as one of the tools in bringing the two women together. They were both writing pieces on the shortstop. Ren for the esteemed Birds on the Black and Ladd for Dish, that led them to creating what they call "The Paul DeJong and Harrison Bader Defense Squad."

Unbeknownst to them, they lived just 30 minutes apart-but mostly connected via email and Twitter in becoming fast friends and collaborators until recently meeting in person for the first time.

It is their mutual voice and presence on the social network that kept catching my eye throughout the summer.

They don't just share each other's articles on the platform, but often get into long conversation threads about players, experiences, and other random stuff. It's quite entertaining. To Ren, it's just the two being silly, but it's also helping add the crucial human element to their writing personas. "I think by bantering with Chelsea and sharing bits of life that don’t have anything to do with writing and baseball, you begin to regain that human element," Ren said. "You can write the most amazing pieces, but at the end of the day most people want to connect on a human level." Ladd and Ren don't take anything for granted. They know a website's lifespan depends on interaction and appreciation of the readers.

After all, it's still in "love of the game" mode. Ladd, who has worked in the medical field for eight years, juggles two jobs. She works for an Opthamologist and covers high school sports for the Paducah Sun newspaper. Ren is a pro photographer and writes for Birds on the Black. She has a wonderful recent interview with DeJong's mother, Andrea-in addition to writing for Dugout Dish and other endeavors.

For Ladd, the website goals are hefty and involve growth. While Dugout Dish doesn't have to be a business yet, that doesn't mean the site isn't moving forward.

Ladd is planning a newsletter, merchandise, and a YouTube channel. There is a "12 Days of Christmas" Cardinals-themed article series that is underway right now. She wants to reach the diehard baseball fans but also pull in the casual ones as well. Whether the article is lighthearted or serious, Ladd wants the website to flourish at its own pace.

The thing that reverberates throughout the endeavor, though, is giving young girls hope about becoming a sportswriter.

"I want young girls to know they can be a part of the sports industry and that despite how terrifying it can be some days, they can do it — they can have a voice in the world of baseball," Ladd said. Ren agrees, noting how a girl liking sports and a girl writing about sports can merge into the same lane. "You can be a girl and you can love sports. You don’t have to separate the two. You have a voice and you are allowed to use it and to take up space," Ren said.

With the website in its first year of operation, it hit five months last week, the time to jump in and start reading is now. Don't think of it as a revolutionary act undertaken by two women; just think of it as content that needs to be consumed.

Ladd and Ren offer you unique articles, entertaining interactions, and a passion that speaks through their work.

It all started with a dog named Kirk, a camping trip decision, Christian Day, and Paul DeJong. Chelsea Ladd didn't just create a website for Cardinal content. Along with Rachael Ren, she created something that will endure and carries a powerful message about equal opportunity.

If there's a breakthrough Cardinal website in 2019, it's the Dugout Dish. Now you know the story. Go find the words right here.