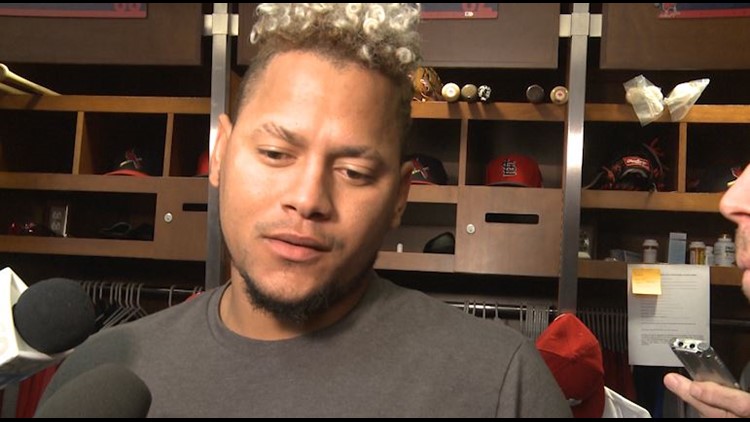 'It was really scary': Shildt, Martinez talk about breathing problems that sidelined closer

ST. LOUIS — Cardinals closer Carlos Martinez is back with his club after a weekend spent facing breathing problems that even sent him to the hospital.

"When I got to Colorado I felt a tightness in the chest and I couldn't breathe properly," Martinez said through the help of an interpreter. "Even when I was drinking water I was breathing through my mouth. But now I feel better."

The Cardinals and Martinez said a combination of asthma and allergies was the cause of the problems, and that he even had to spend Saturday night through Sunday afternoon in a St. Louis hospital.

"It was really scary. People don't realize. He was in a tough spot," manager Mike Shildt said. "That's one of the worst feelings there can be, not being able to catch your breath."

Martinez has not pitched for the team since Thursday, September 12. He and Shildt expect him to be available for the team on Monday.

"As of this moment, yes. I think we have our hands around it hopefully," Shildt said. "But he hasn't exercised or played catch yet but it looks like he is going to be fine to compete tonight but looking forward to moving ahead with him."

"I feel better today and the doctor gave me the green light to pitch and I'm feeling better," Martinez said.

Martinez said it was the first time he ever went through something like this, and that he has treatment to make sure it doesn't happen again.

The Cardinals start a three game series with the Washington Nationals on Monday night.

RELATED: Paul Goldschmidt had one of the best games of his career

RELATED: Opinion | How Adam Wainwright went from lost cause to comeback story of the year for the Cardinals