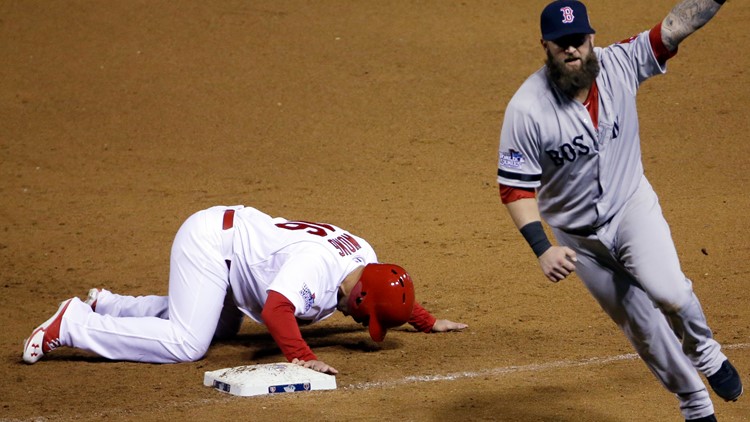 Looking back on the worst St. Louis Cardinals moments of the decade

ST. LOUIS — When I think about the worst moments of the past decade in St. Louis Cardinals' history, the first thing that comes to mind is Kolten Wong and first base. It's what it is, but we'll get to that in a moment.

First off, a decade of baseball can be taxing. There's the enjoyable sensation of knowing the game takes up the majority of the year if you factor in spring training, regular season, postseason, and offseason hot stove, but that's also the rough part of the game.

The game begins when everything is growing fresh and ends when it all dies off before winter, often leaving fans in a state of exhausted misery.

Since everyone is talking about the highlights from the past decade in St. Louis, I figured turning heel and discussing the low-lights was an apt route to take as 2019 closes its doors.

The funny thing is you are prone to remember the hardships just as much you do the good times. That's the bittersweet aspect of it all. As Led Zeppelin once sang, "good times, bad times, you know I had my share." That's baseball for you.

So let's get to the worst moments of Cardinal baseball from the past ten years. There is no real order here, just a random list of stomach aches. Pour a drink now, because this may get ugly. When in doubt, head over to sunnier shores and check out MLB.com's Anne Rogers' top home runs of the decade list as an easy chaser.

And away we go!

I Left Michael Wacha's fastball and my heart in San Francisco

It's written in your memory like the saddest song ever. The 2014 playoffs revealed the true colors of Mike Matheny's ineptitude as a manager. He just didn't know what he was doing, a kid with a complex toy that was missing directions for assembly.

The Giants and Cardinals were battling in the NLCS, and Matheny went to Wacha in a pivotal moment in Game 5. Two on, game on the line. Wacha hadn't pitched in 20 days, and sitting idle in the bullpen were closer Trevor Rosenthal and lefty specialist Randy Choate. It made sense to go to one of them with Travis Ishikawa coming up, but then again, so does spreading cream cheese on a warm bagel. Wacha came in and served up a meatball with two runners on base. Game over. Series over. Matheny outed. Yikes.

Easily the most gut-wrenching World Series moment (on the bad side) for the Cardinals. It didn't help that David Ortiz was a machine back in the 2013 World Series. But when you get picked off to end a close game, it's hard to forget. Wong had pinch-ran for Allen Craig, who had singled. Carlos Beltran was up with a chance to tie it, but never got the chance. Koji Uehara spun and fired to first, beating a flat-footed Wong. It didn't help that it was the first time that this happened in a World Series. The very young second baseman was teary-eyed after the game, owning the mistake that would define the first part of his career. Cardinal Nation was left stunned, wondering what happened to the series lead they once owned. St. Louis would lose Games 5 and 6, finishing up the Red Sox's triumph. Extra bourbon for all.

This is where I really get under the skin of fans. The World Series hometown hero may be best remembered, for good reason, for his series-saving and rescuing big hits in Game 6 of the 2011 World Series against Texas-but he also made one of the worst errors a World Series game has ever seen. A dropped foul popup allowed the Rangers to take another lead, and for a couple hours or so, that's how Freese's legacy was being drawn up. And then he tripled, homered, doubled, and became a hero for life. Like Dent said, it's darkest just before dawn.

Albert Pujols signs with the Angels, ends the chance for Stan the Man status

I don't care what he's done since leaving in Los Angeles. The Cardinals spent seven years looking for his replacement. When Pujols chased the money out west, he ended the chance to sit next to or step in front of Stan Musial as a franchise great. Someone who spent his entire career in one spot. Imagine Pujols, Adam Wainwright, and Yadier Molina all spending their years in St. Louis? It's more than baseball, it's a legacy. A choice was made, and the Cardinals benefited from it. Pujols hasn't been the same since, but this still goes down as a bad moment. What was lost, even many years later, still strikes me as something larger than what was gained. What has the team won since?

Adam Wainwright tears his Achilles tendon, never is the same

Wainwright was on his way to winning a Cy Young and remaining one of the top pitchers in baseball when he tore his Achilles tendon in Milwaukee in 2015.

It came when he was hitting, as he took off to first base. He had started the season with a filthy earned run average and looked dominant, but arguably was never the same. In 221 starts before the injury, he compiled a 2.96 ERA. In 95 starts since, he had a 4.58 ERA. The injury occurred when he was 33 years old, so Wainwright wasn't a spring chicken. But he had plenty of baseball left, and had ranked in the top 5 in Cy Young voting in four of the past five years coming into 2015. It all changed that night. I had ice cream that night when I heard about the injury. I think the entire 314 did as well.

Matt Adams and Kolten Wong play the outfield, face-plant into grass shortly after

Do I need to say more, or is there already blood coming out of your eye sockets? Once again, Mike Matheny as a manager everybody.

RELATED: Opinion | Why Nicholas Castellanos and the Cardinals are a solid match

RELATED: Opinion | Why giving up on Carlos Martinez, the starter is futile for Cardinals' fans

Randal Grichuk plays outfield even though he can't throw a baseball

Remember the underhand tosses to Jason Heyward in 2015? That's right when the ulcer makes a comeback. Like, who else would do this? Matheny brand. Good luck, Kansas City.

The Cardinals lose Oscar Taveras to a horrible tragedy

Taveras had his whole career and life ahead of him before he made a common mistake. Along with his young girlfriend, Taveras got behind the wheel after consuming alcohol and drove on dangerous wet roads in the Dominican Republic. Something so many do, and only a handful get away with. His death affected the organization in so many ways, causing John Mozeliak to call audibles and re-route plans.

He was the next best thing before he was unfortunately a piece of the past for good. I'll never forget finding out and just finding the rest of the night useless. It wasn't just losing a baseball player. It was losing two young people due to one bad choice. It changed things for the team, and not in a good way.

Getting swept in Chicago and right out of the playoffs

When the Cardinals took the field at Wrigley on Sept. 15, they had won 10 of their first 13 games in September, closing the division gap to three games. The comeback was alive and well. Hope was elevated, dread had subsided, and the possibilities were endless. And then the Cubs swept the Cardinals, pushing them 6 games back-and basically finished. St. Louis was outscored 16-6 in the series, with the punishing blow coming in a 4-3 loss in the third game. Who delivered the game-winning hit off Matt Bowman? Jason Heyward. The epitome of ouch.

The Brett Cecil experiment crashes and burns in pivotal loss

Sept. 25, 2018. Cardinals and Brewers locked up in a division battle with Chicago. St. Louis had lost the first game of the series at Busch Stadium, but the 12-4 pounding in Game 2 cinched the inevitable misery. Sure, the game was out of hand by then, but the team needed something from Cecil to give hope to a 2019 revival. He gave them nothing, and thus ended the experiment. He's a gigantic bruise on the team payroll, and it won't clear until next year. You could say this was a good moment and helped 2019's success, but it sure didn't feel like it at the time.

That's my worst list. I am sure I missed some. Hit me up on Twitter, @buffa82, with your worst. It's okay to talk about the bad stuff. It's all part of the game.