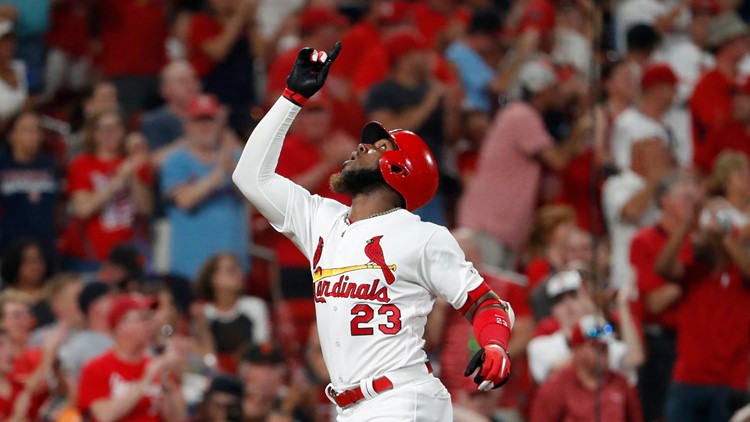 Photo by: AP
St. Louis Cardinals' Marcell Ozuna rounds the bases after hitting a solo home run during the sixth inning of a baseball game against the San Francisco Giants on Tuesday, Sept. 3, 2019, in St. Louis. (AP Photo/Jeff Roberson)

Making the case for the Cardinals to re-sign Marcell Ozuna

As the 2019 regular season schedule enters its final stretch drive (there are only two more open dates!), the question remains about the outfield position that doesn't have an owner in 2020.

Enter Marcell Ozuna. The former Miami Marlin was a rebound acquisition by the St. Louis Cardinals before the 2018 season after they failed to entice Giancarlo Stanton to waive his no-trade clause. After a disappointing first year in St. Louis by Ozuna's 2017 standards and overall expectations, he's become what was promised this season.

No one ever expected him to be Stanton, or necessarily replicate what he did in 2017, but few can deny that anyone else on this team is more valuable with a bat in their hand. Ozuna punishes baseballs, routinely topping 100 miles-per-hour on the exit velocity, and keeping Big Mac Land on its toes. Last night, he assured Jack Flaherty's stellar work wouldn't die in vain with a solo blast that sailed into the McDonald's area in left field's high terrace reserved zone. He's the meat and potatoes of this lineup, a vital boom stick.

RELATED: How Kolten Wong is silencing the doubters, turning his game into a must-watch event

He's also a free agent after the playoffs conclude next month. Ozuna will turn 29 in November, making him a viable acquisition for any contending team that likes big flies, an even larger personality and a producer that can clean-up a lineup. He's making $12.25 million this year in his final year of arbitration, aka control, so many expect him to cash in this winter. He should, because bats like his aren't just laying around Forest Park for the picking.

Consider this. Where would the Cardinals be without Ozuna this year? They certainly wouldn't be in first place. He's rescued their inconsistent lineup time and time again. Last night was just the latest example of the Big Bear picking up the slack and sealing a victory. If he doesn't hit that home run, the Cardinals may not win that game, and their three-game lead in the division is suddenly just two.

Don't forget about this either -- Ozuna has picked up the slack of a disappointing Paul Goldschmidt season so far. Point to the home runs all you want, but would you have bet money Ozuna would be topping the star first baseman in doubles, on-base percentage, slugging percentage, and wRC+? I think not.

The last stat measures weighted runs provided by a player, taking into account the opposition and their ballparks. 100 is average. Ozuna's mark sits at 117 before tonight's game while Goldschmidt's mark rolls by at just 105.

It's also important to remember, his fault or not, the shoulder simply wasn't 100% for at least a third of the 2018 season. A weak shoulder means no pop and no throws in left field. By June, Ozuna was starting to slug. His splits last season support this argument.

What would Ozuna cost? In case you missed it, owners and general managers aren't handing out contracts like candy these days. The past two offseasons have been stiff and slow-moving. The people who think Ozuna is going to pick up a six year/$100 million deal with ease aren't paying enough attention. Ozuna would only finish with a 3-3.5 fWAR if he keeps up his torrid pace, so that doesn't scream highest-dollar to me.

Looking at the free agent class in 2020, the pickings aren't great for outfielders, but that doesn't necessarily mean Ozuna's price will skyrocket. Out of all the upcoming free agents, only the 37-year-old Hunter Pence and Corey Dickerson have a higher OPS this season than Ozuna, while only Chicago's Nick Castellanos is younger and close in OPS  at 28 years old.

Ozuna still stands as the jewel of the class. If I were the Cardinals, I'd offer him a contract length around three or four years. I would not go five years. Somewhere around $18 million per season. I don't think he's worth more than that, great 2019 season or not. The suspect defense in left field won't help his National League case for a monster deal, and I wouldn't bet on the American League just handing over big cash for a guy with a career .789 OPS and 114 OPS+. That's not belittling his value, but helping to find its proper place in the market.

Four years around 72 million doesn't hamper the Cardinals, and gives them a reliable producer in the outfield. It's a modest deal. I wouldn't expect his defense and bat to completely fall apart before he reaches 33 years old. The Cardinals won't carry an outfielder into 35, 36, or 37. They don't want another situation like they have with Dexter Fowler, where they were practically begging for a comeback campaign in 2019. Fowler turned 31 a week before the 2017 season began.

Due to the slim market pickings, Ozuna could make some money, but I don't see a five- or six-year deal out there. At the same time, I don't see an easy three-year contract out there. Something wild could happen where he accepts a qualifying offer from St. Louis, and tries to put together a fully-loaded 2020 season where he plays more than 130 games, but Ozuna may not want to take those chances, especially in this market.

If not Ozuna, what's the plan? Do you really think this team is going to run with Tyler O'Neill, Randy Arozarena, or Lane Thomas in left field next year? Keep dreaming. As long as Harrison Bader doesn't stumble terribly again, he starts 2020 in center. Unless the team finds a suitor for Fowler, he is in right field. Left field is really the only open position next season. Who fills it? Don't wish upon a prayer or only halfway trust a young player, Cardinal suits.

The rest of this season will be fun. The Cardinals are 20-5 in recent times, but when the final pitch is thrown (hopefully in late October), there will be decisions that have to be made. Ozuna is chief among them.

Are the Cardinals ready to run with youth in the outfield? What about the rapidly ascending Dylan Carlson? It's becoming clear that Carlson is the real deal, and he could be one reason why the Cardinals don't pull the trigger on Ozuna. If that is the reason, I am fine with a pass.

If the Cardinals are not ready to commit to Carlson, they need to retain Ozuna, at least for three seasons ... or a season. He may price himself out. The decision would then become very easy.

The Cardinals need to have a firm plan in place, and it needs to be thought about as soon as possible. Maybe it's already set. Maybe not.

I didn't use to be for an Ozuna re-sign. He's turned my head along with many others. The man can hit, and that includes Major League pitching.

Legit producers don't grow on trees. The Cardinals need to think long and hard about that before letting Ozuna walk.