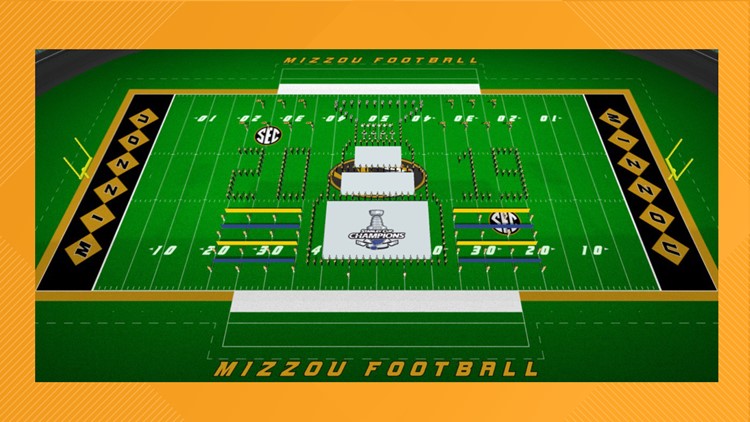 The Blues might reside in St. Louis, but the entire state of Missouri has gotten in on the Stanley Cup celebration this summer. The University of Missouri marching band has given a tease to show they'll be continuing that trend.

"Marching Mizzou" as they're called, tweeted out this intriguing tease on Thursday.

Pretty awesome, right? The band appears to be gearing up for a Blues-themed formation during a halftime performance that recognizes the team's first ever Stanley Cup championship.

The Blues responded on Twitter with an amazed, "Are you for real?!!!".

It appears Marching Mizzou is for real, as they went on to reveal a date for they're Stanley Cup homage to the Blues.

The Tigers play South Carolina on September 21 at Faurot Field, with a kickoff time yet to be announced.

No word yet on if the actual Stanley Cup will be in attendance.

RELATED: Missouri preparing for altitude challenge in opener vs. Wyoming

RELATED: Mizzou returns to Arrowhead to face Arkansas in 2020

RELATED: Missouri and Illinois are reaping the benefits of the St. Louis pipeline

RELATED: Mizzou football could be special in 2019 if the NCAA gives them the chance

RELATED: All eyes are on Kelly Bryant as Mizzou football heads into 2019