Mikkola to make NHL debut for Blues against San Jose

The Blues are back in town for their longest home stretch of the season, and looking to get back on track. They'll have a new face in the lineup as well. 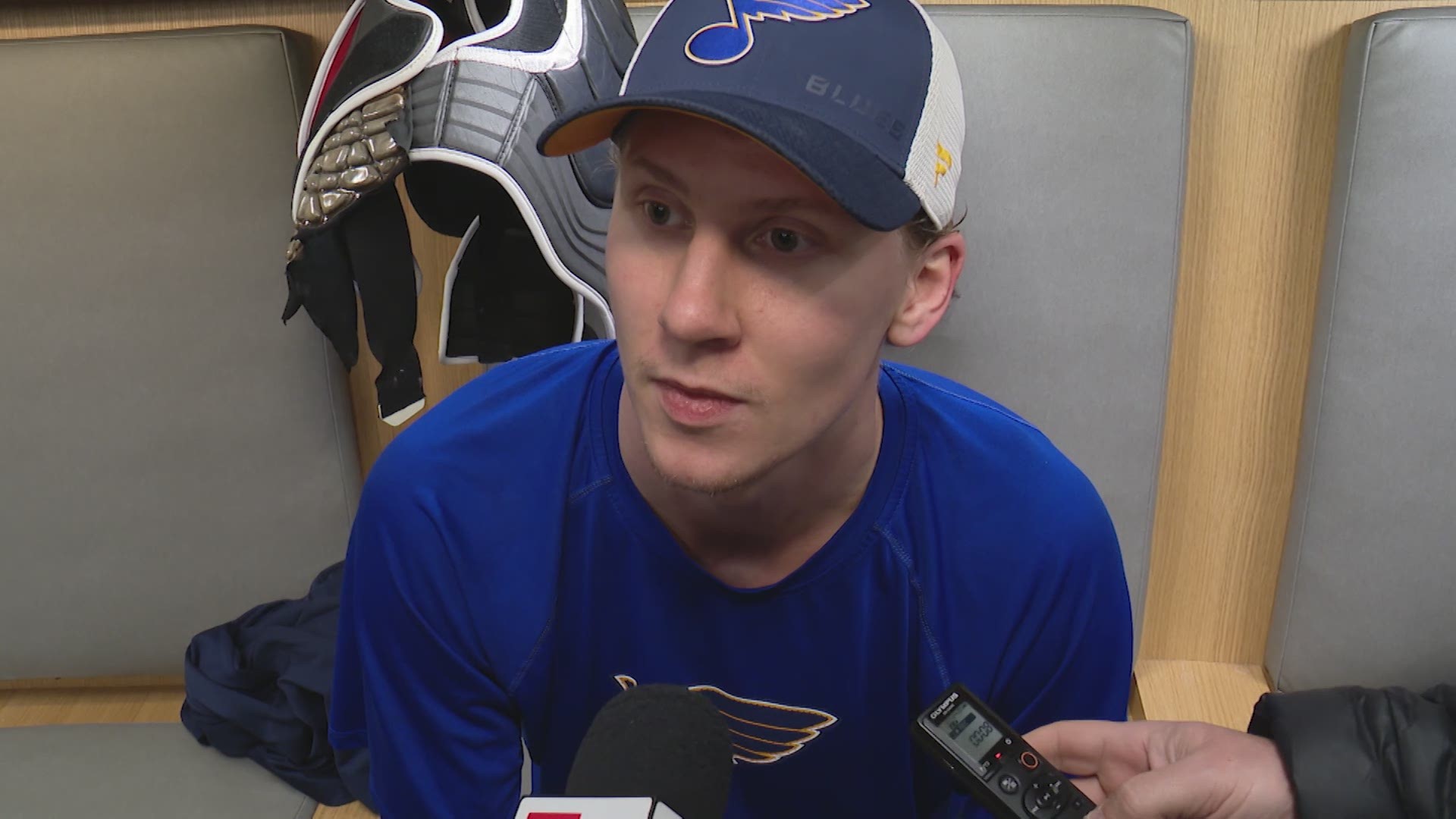 ST. LOUIS — Niko Mikkola has waited for this moment for some time.

Mikkola, who turns 24 in April, was recalled for the second time from San Antonio on Sunday and will replace Colton Parayko, who will miss his second consecutive game nursing an upper-body injury.

"Of course very excited," Mikkola said. "It's the moment I've been waiting for like so long. I've done a lot of work for this opportunity. I'm excited.

"I'm not too nervous right now. We'll see what happens before the game. It's usually a good thing if you're a little bit nervous. I don't want to be too much."

MIkkola, who had 11 points (two goals, nine assists) in 30 games with the Rampage, is listed at 6-foot-4, 185 pounds and will be paired with Robert Bortuzzo against the Sharks, who are 3-1-2 their past six games.

"I think he’s done a good job in the American Hockey League defensively," Blues coach Craig Berube said of Mikkola. "He closes on people quick and big and got a good stick. He plays an aggressive game. I feel like if he’s going to be ready, it’s now. He’s a year and something in the minors, played in the world championships last year, keeps improving, we like his size and his skating, his aggressive play."

Mikkola becomes the fourth Blue to make his NHL debut this season, joining Klim Kostin, Austin Poganski and most recently Saturday in Vegas, Jake Walman, who was assigned back to the Rampage to make room for Mikkola.

"They just told me like to be ready, I might play tomorrow," Mikkola said of when he found out. "I slept real well, so it didn't bother me."

"I'm excited for him," Blues goalie Jordan Binnington said of Mikkola, a teammate with the Rampage last season. "He plays hard and he plays hard. I expect that out of him tonight. Solid d-man, pretty strong out there to clear out the front of the net. I'm sure he's excited."

As for Parayko, this will be his second game missed this season and just the seventh in his fifth season. He's been skating the past two days but Berube said not quite ready to go.

"I mean, right now, that’s all I can really tell you," Berube said of Parayko's day-to-day status. "I don’t know a whole lot to be honest with you. See how he is tomorrow. Hopefully he feels better.

"I don’t think it’s anything too serious but he can’t go."

Defenseman Carl Gunnarsson will miss his 11th straight game with an arm injury, but he looks like he's on the cusp of marking a return. Berube felt encouraged at practice on Monday but decided against bringing the veteran back tonight.

"He’s possible but he’s only practiced once with us," Berube said. "I just feel like he needs more practice time. Skate today, practice with the team team tomorrow. When he’s been out a while, I don’t want to put him in a situation where timing and things like that will be affected. I’d rather keep him out and get some more practice time."

For Binnington, who will get the start tonight after being pulled last Thursday in a 7-3 loss at Colorado, today marks the one-year anniversary of his first NHL start and the start of what turned out to be a historic run for the Blues all the way to winning their first Stanley Cup.

"It went by pretty fast, a lot accomplished," Binnington said. "I think we're in a good spot today, so that's important.

"... I don't think I'm much of a sentimental guy. Sometimes if you're driving and you're thinking, it hits you, but other than that, it's a new season and you've got new things on the mind and on the agenda. We're back to work and we're trying to have fun while we're doing it.

"I don't know the details (of all the accomplishments), but obviously we've had a lot of wins and a lot of success, which is important to me, important to this team, important to the organization. We've done a good job. We're in a good season now and going into the second half here, it's time to keep it going and keep going, stay on the right path. Now it's getting fun."

Binnington was pulled for the first time in the regular season against the Avalanche after allowing seven goals on 41 shots.

"It happens, right? I've got to hold myself accountable, timely goals, end of period goals are big and you try and limit those," Binnington said. "It didn't work out that game, so you pick yourself up and you move forward, right?

Jordan Kyrou, who as a Greek Orthodox is celebrating Christmas today, will return to the lineup after being a healthy scratch the past two games.

"We want him to use his ability, his speed and his shot, and his playmaking ability," Berube said of Kyrou. "I think on the defensive side of things, the last couple of games, I took him out. The one in particular here at home, a little loose defensively and stuff like that. Some soft turnovers. He’s a young kid, he’s still learning and he’s going to make mistakes at times. He just has to manage the puck and be responsible defensively. That’s the biggest thing. Then it’s just about being competitive and using your ability. It’s normal. A young guy like that, he’s probably going to make mistakes at times."

As for Zach Sanford, who will play alongside David Perron and Ryan O'Reilly, fans have been down on his inconsistent play, and Berube is giving him a loose leash trying to get his game going.

"I think he’s in between right now," Berube said. "He’s got to get an aggressive attitude in my opinion, that’s probably the biggest thing, it’s between his ears, and play a more direct, north, power-forward type game. That’s his game. That’s what he has to do. Has to be more consistent at it.

Center Jacob de la Rose will be a healthy scratch for the first time since Nov. 19 and just the third game since joining the Blues via trade from the Detroit Red Wings for Robby Fabbri on Nov. 6.

"Same thing. It’s an aggressive attitude for me, just know what you are and I think he’s played pretty good but in the last couple of games it’s slipped," Berube said.

* Perron and Jaden Schwartz each come into the game with 13 points (five goals, eight assists) the past nine games. Schwartz has 18 points (six goals, 12 assists) in 18 games against the Sharks.

* O'Reilly has nine points (one goal, eight assists) in a seven-game point streak at home.

Aaron Dell will start in goal; Martin Jones will be the backup.