Absence of Hicks, Cabrera, Reyes and Gallegos creates openings in Cardinals bullpen, but for who?

Injuries, travel issues, questions and positive tests have made the Cardinals' bullpen situation a puzzle for the start of the 2020 season

ST. LOUIS — Back before the Cardinals opened their summer camp in preparation for the delayed start to the 2020 season, the team said it intended to have 16 or 17 pitchers on the opening 30-man roster.

With 10 days left before the July 24 opener, trying to get to that number might be harder than Mike Shildt and John Mozeliak originally would have expected.

John Brebbia is gone for the year following Tommy John surgery. The Cardinals announced on Monday that Jordan Hicks has decided to opt-out of the season, citing his pre-existing conditions as a Type 1 diabetic and last year’s Tommy John surgery.

What they didn’t know was that as of Monday Giovanny Gallegos would still be in Mexico, with his absence only explained as “travel issues” with no information on when he might arrive in St. Louis. They didn’t know that Alex Reyes, according to the team would be in St. Louis but yet to appear on the field for a practice with no information provided to explain his absence.

There is no mystery surrounding the status of Genesis Cabrera, just a question of when he will be medically cleared to join the team after twice testing positive for COVID-19. Ricardo Sanchez, likely not a serious candidate to be on the opening day roster, also has not been available to practice because of two positive COVID-19 tests.

Those missing pitchers have reduced the number of active pitchers on the camp roster to 20 and of that group, it’s fairly easy to project who will claim 15 of the spots on the roster, beginning with a rotation of Jack Flaherty, Dakota Hudson, Adam Wainwright, Miles Mikolas and Carlos Martinez.

The three favorites to win the spots which likely would have gone to Gallegos, Reyes and Cabrera had they been in camp are now Junior Fernandez, Kodi Whitley and Brett Cecil, barring a new injury.

With 15 spots accounted for, the puzzle gets trickier for the Cardinals if they still want to have a 16 or 17-man staff.

It has been well documented that the Cardinals do not expect top prospect Dylan Carlson to be on the opening day roster, even if the outfielder is one of the best players in camp, because of the desire to keep him from earning a full year of service time for this 60-game season. Keeping him off the roster for just six days will buy the Cardinals an extra year of control over his contract six years from now.

If the Cardinals want to be that careful with Carlson, they no doubt will want to do the same thing with their three best pitching prospects in the camp – Johan Oviedo, Zack Thompson and Jake Woodford – especially if they would only filling the last couple of spots in the bullpen, probably pitching only in emergency situations.

Both the right-handed Oviedo and left-handed Thompson are 22 and figure prominently in the Cardinals 2021 and beyond plans. Oviedo has dramatically reshaped his 6-foot-5 body in the last year and made a strong impression both in spring training and so far in the summer camp after being in the rotation last year at Double A Springfield.

Thompson was the Cardinals top pick in the 2019 draft out of the University of Kentucky and after a heavy workload in the college season pitched only 15 innings as a pro last summer split between the Gulf Coast and Florida State leagues. Neither Oviedo or Thompson is on the 40-man roster, which no doubt will also be a factor in finalizing the last spots in the bullpen.

Of these three, Woodford might have the easiest path to a roster spot. He is a year older than Oviedo and Thompson at 23 and made 26 starts at Triple A Memphis last year. He also has been used in relief in spring training and would most likely have been slated to make his major-league debut sometime this season if it had been a normal 162-game schedule, so burning a year of contract control for him is not as big as it would be for Oviedo and Thompson. He also has the advantage of already being on the 40-man roster.

Still, the Cardinals probably don’t want to do that, but what are their other options for the final one or two spots?

The only other pitchers on the summer camp roster are right-hander Seth Elledge and left-hander Rob Kaminsky, both of whom joined the camp late after it became known the arrivals of Cabrera, Sanchez, Gallegos and Reyes would be delayed.

Neither Elledge or Kaminsky is on the 40-man roster, which works against giving them a spot on the active roster – especially if they would only be there for two weeks before the roster is cut from 30 to 28 players.

Here’s what likely makes the most sense for the Cardinals:

Fill 15 spots with the pitchers who deserve to be there. The service clock already is ticking for all of them except Kim and Whitley, so there are no concerns there, then fill the final one or two spots, depending on whether the team will keep 13 or 14 position players, with relievers from the group of Cabrera, Reyes and Gallegos.

Here’s why: All are on the 40-man roster. All have already been in the major leagues. They probably will not have to pitch during the two weeks that the roster is at 30 players but can still work out with the team, and then be optioned to the satellite camp in Springfield to get extended work and prepare to rejoin the team later this summer. That keeps the clock from starting unnecessarily for the prospects and doesn’t force somebody into a spot they are not ready for.

An indication of which way the Cardinals are leaning could come this week. The satellite camp is scheduled to open on Thursday, so it’s likely the first cuts from the summer camp roster will be made before then. And, if the team is seriously thinking about having somebody else on the opening day roster, they probably should get a chance to pitch in some of the remaining intrasquad games.

Whether the Cardinals open with 16 or 17 pitchers could depend on the health of a couple of position players – both Brad Miller and Dexter Fowler have been dealing with minor injuries but still have time to be ready by opening day.

Twelve players appear to have locks on roster spots among position players – Yadier Molina, Matt Wieters, Matt Carpenter, Paul DeJong, Tommy Edman, Paul Goldschmidt, Rangel Ravelo, Kolten Wong, Harrison Bader, Fowler, Tyler O’Neill and Lane Thomas.The final one or two spots probably will go to Miller and perhaps Andrew Knizner, if the team decides to carry three catchers at least for the first two weeks. Doing that would give them the option of using either Wieters or Knizner as a potential DH and still have another catcher available should Moline get injured.

The only other player who would appear to be a serious candidate for the final spot is Edmundo Sosa, but probably only if Miller has to open the year on the injured list.

After having Monday off, the Cardinals will play their fourth intrasquad game of the camp on Tuesday night. It also was announced on Monday that they will host the Royals in an exhibition game on July 22. 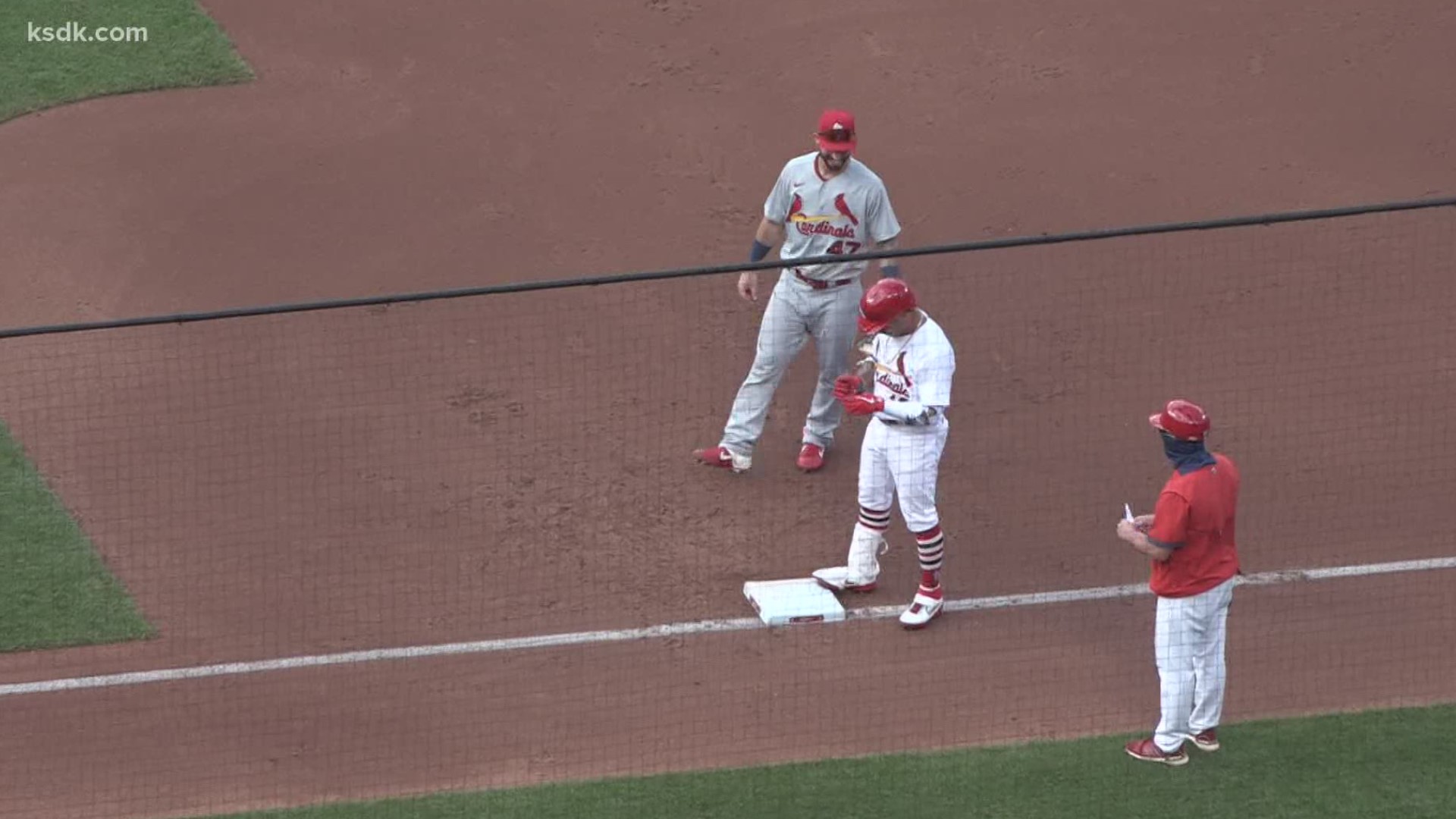