"I'm glad my little man and my Sadee could be out here. Because they don't have memories of this, and hopefully they'll remember this forever." 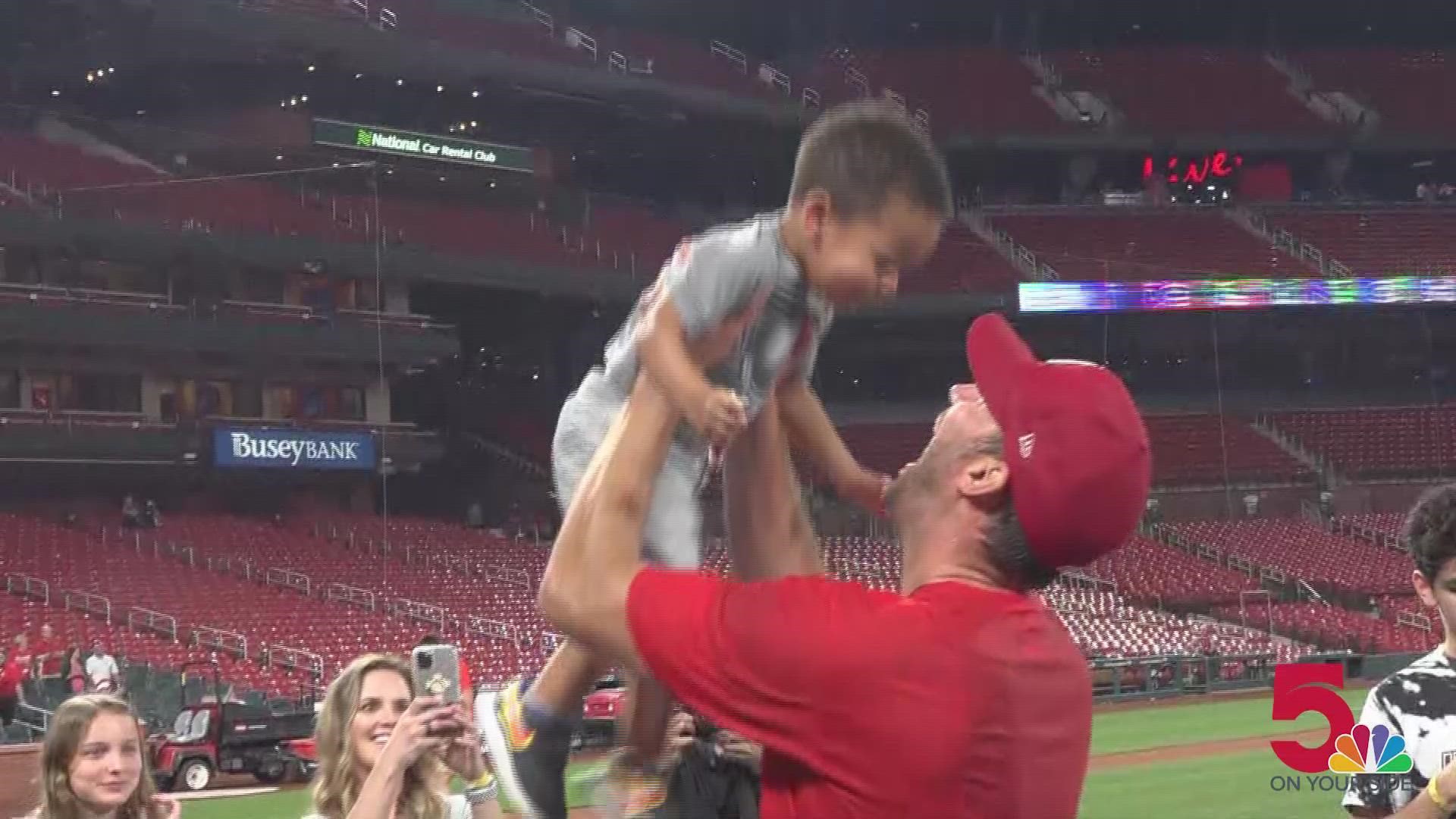 ST. LOUIS — Adam Wainwright has done this whole "champagne celebration" a time or two. But Tuesday night's playoff clincher celebration against the Brewers had a special feeling to it.

Not only did the 40-year-old starter get his 17th win for the team's 17th straight victory, he got to celebrate it with his family on the field afterward.

Only the players were allowed in the locker room for the champagne celebration due to COVID protocols, so after the initial hoopla, most of the team came back out to share the good times with their families.

"Really neat. I was sad my oldest daughter couldn't be here because she's in high school now. She's back home in Georgia going to real school," Wainwright said of celebrating with his family. "But I'm glad my little man and Sadee could be out here. Because they don't have memories of this, and hopefully they'll remember this forever."

Wainwright greeted his four daughters in attendance, his wife and his son Caleb on the field after the game. The Wainwrights adopted Caleb in 2019.

As for the team, the veteran thinks this current Cardinals club could be set up for a special run.

"We feel dangerous. There's been a couple of times when I start the postseason and think, 'This team can do it.'. We have a team that could do it, we just have to go out and execute, play the game we've been playing for the last 16 games and if we keep doing that we'll be in good shape," Wainwright said.

And while the champagne celebrations are fun, Wainwright knows there are still four to go if they want to be the best.

"We're very focused right now. We're having fun, it's exciting. I'm still wearing my champagne shirt. I'm freezing and I love every part of it. But we got some games to win. We're planning on four more of these. We've got to do one at a time, but we're planning on four more of these. Our guys just got a taste of it. There's a couple of guys in there who have never popped before so they're pretty excited right now. It never gets old, and we're excited to get back in the postseason."

The 2021 Cardinals' run to a playoff berth is unlike anything Wainwright has been a part of in St. Louis before.

With just a 2.8% chance at the playoffs on Sept. 7, the team rattled off a franchise-best winning streak that hit 17 with his win on Tuesday.

"Fangraphs had us at like a negative 400% chance to make the playoffs and we just proved everyone wrong and we're just going to try to keep doing that," Wainwright said.

Personally, Wainwright is enjoying one of his best seasons in the Majors. Likely done for the rest of the regular season while he rests up for the Wild Card game, Wainwright finishes with a 17-7 record, 3.05 ERA and a tie for the league lead with three complete games. And he did it all as the second-oldest pitcher in baseball.

As a team, it wasn't easy, but the Cardinals willed their way to October baseball. Now Wainwright and company want to keep the good times rolling.

"We had to overcome probably the worst baseball I've ever seen a Cardinals team play. We just weren't doing anything right. We were finding ways to lose games... It was just something that was wrong every day," Wainwright said. "It was just understanding that we were a better team than we were showing, and we could go out there and compete with anyone when we play right and that's what we did."