"Just wasn’t meant to be … That one stung, but we will move on and get ready tomorrow.” 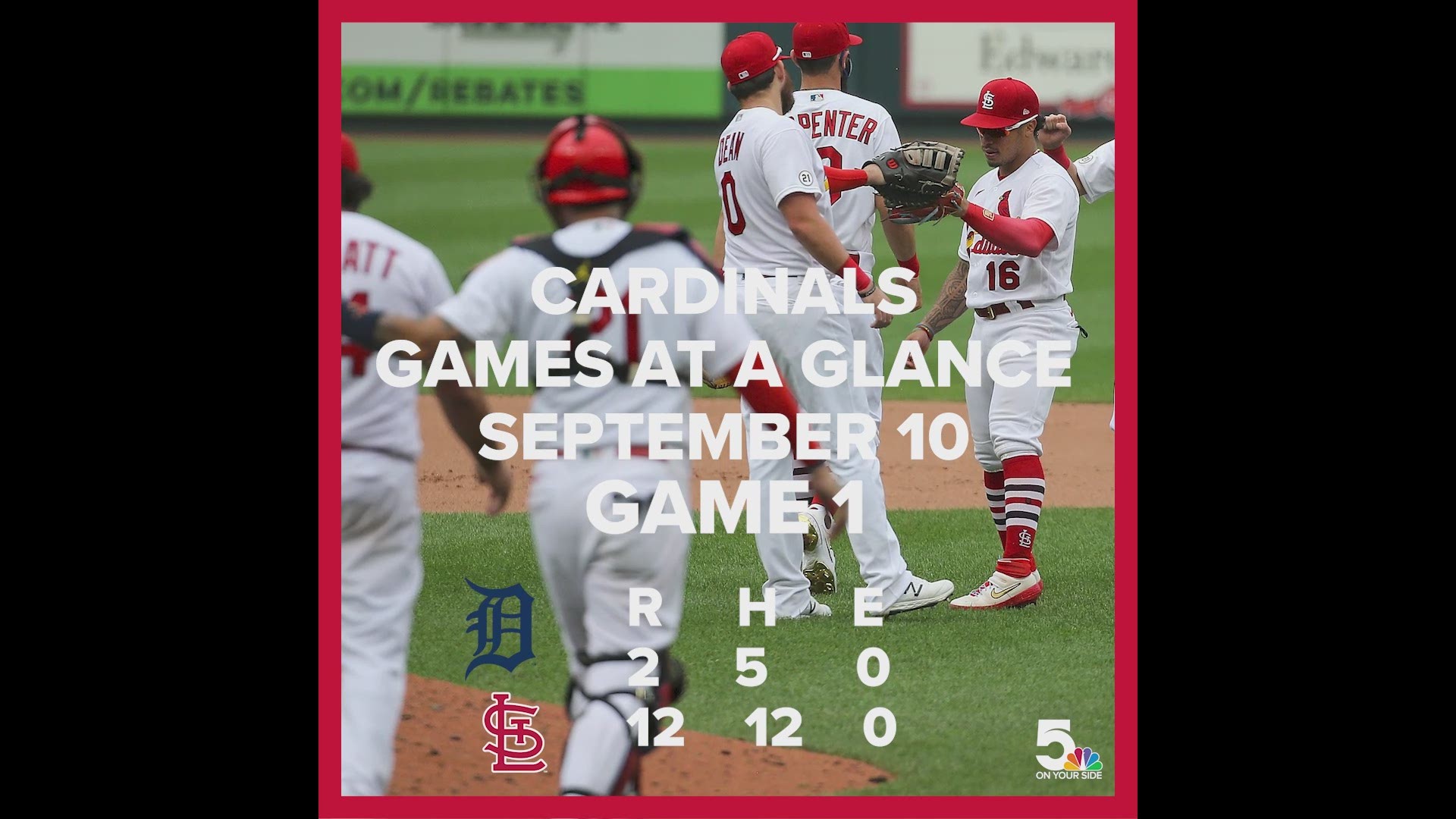 ST. LOUIS — The Cardinals were three outs away from sweeping a doubleheader against the Tigers on Thursday, and their closer, Giovanny Gallegos, was coming into the game with a two-run lead.

It was the script the Cardinals had hoped for – but it didn’t end the way they would have liked.

Gallegos failed to retire any of the three hitters he faced and had to come out of the game because of a groin injury. A walk and two singles, and a throwing error by Harrison Bader, had cut the lead to 3-2 when Ryan Helsley took over on the mound.

Manager Mike Shildt said the team did not have any immediate information about the extent of the injury.

“It was pretty clear he was not going to be able to continue,” Shildt said. “We’ll have a better idea once we get some imaging and a little more time.”

The error, on a misguided throw to the plate, allowed the runners to advance to second and third and the Cardinals intentionally walked Miguel Cabrera, who had struck out three times, to load the bases. Shildt said had the runners been on first and second Helsley would have pitched to Cabrera.

Instead, Jeimer Candelario – the Tigers best hitter all day – came up and muscled an 0-2 pitch into the outfield that drove in two runs and put the Tigers ahead. A two-run homer followed, and the Tigers had a five-run seventh and a 6-3 win and a split of the doubleheader.

“You pick your poison,” Shildt said. “Talking about a Hall of Famer (Cabrera). That guy’s been doing that for a long time. A lot of experience, the guy’s driven in a lot of runs for a lot of years. It was not a great recipe for an experienced hitter.

“I still thought we were going to get out of it. Still had a chance at that point. Just wasn’t meant to be … That one stung, but we will move on and get ready tomorrow.”

A win in game two would have left the Cardinals a season-high three games over .500.

In the opener, the Cardinals hit five homers, including one from Yadier Molina while wearing uniform number 21 in honor of Roberto Clemente, and one from Paul Goldschmidt on his 33rd birthday, in a 12-2 victory.

Here is how the games broke down:

At the plate: The other home runs in the opening game came from Tyler O’Neill, Lane Thomas and Rangel Ravelo. It was the fifth of the year for O’Neill and the first for Thomas and Ravelo … Tommy Edman homered in game two … Four of the game one homers were two run shots, and Ravelo, the DH, also drove in a third run with a sacrifice fly as the Cardinals blew the game open with a seven-run third inning, sending 11 hitters to the plate … It was the fifth time in Busch 3 history the Cardinals have hit five home runs (including one six-homer game). Their last game with five homers was on Sept. 27, 2016 against the Reds … This was the second time Goldschmidt has homered on his birthday in his career … The Cardinals’ first two runs in the second game came on an RBI single from Matt Carpenter in the second and an RBI double from Carpenter with two outs in the fourth.

On the mound: Jack Flaherty worked five innings in the opner to get the win, allowing four hits. He struck out five of the first eight hitters he faced before giving up a two-run homer to Candelario in the fourth … Austin Gomber worked three scoreless innings in game two, leaving with two runners on base and no outs in the fourth, but Alex Reyes pitched out of a bases-loaded, no-out jam before working a 1-2-3 fifth … Genesis Cabrera allowed a home run to Candelario in the sixth for the first Minnesota run before John Gant got two outs to strand an inherited runner and turn the lead over to Gallegos.

Key stat: The seven-run third inning in game one was the Cardinals biggest inning of the season and the Tigers’ five-run seventh in game two equaled the most runs the Cardinals have allowed in an inning this season.

Worth noting: The Cardinals placed pitcher Johan Oviedo on the COVID-19 injured list Thursday. John Mozeliak, president of baseball operations, said Oviedo came into contact on Tuesday night with an individual away from the team who tested positive on Wednesday. Oviedo has tested negative, but will self-isolate while he continues to be tested on a daily basis. “We’re still in the early stages of this so finger crossed that he won’t,” Mozeliak said, “but given our experience with this, given what we know about it, the smart thing is to make sure he self-isolates and has no contact with anyone.” Because the team was off Wednesday, Oviedo has not had contact with any other players or staff members. Mozeliak said it was unlikely that Oviedo will be able to make his scheduled start on Sunday but could perhaps pitch as early as Monday should be continue to test negative … Carlos Martinez would be in line to start either Sunday or Monday but that decision hasn’t been made. “I can’t get past today,” Mozeliak said. “Every time we think we have our roster set something else changes. It seems like we have a roster move every single day.” … The Cardinals also activated outfielder Austin Dean on Thursday, giving them a fourth position player on their bench.

Looking ahead: Adam Wainwright will get the start on Friday night as the Cardinals open a three-game series against the Reds.