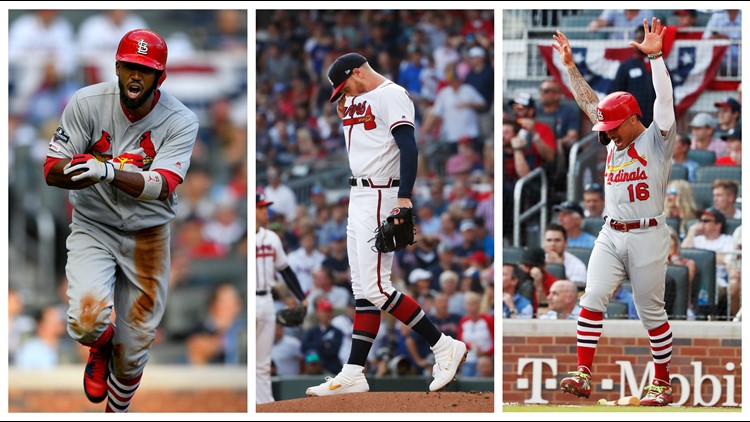 ATLANTA (AP) — The St. Louis Cardinals have scored a record 10 runs in the first inning of the decisive Game 5 of the NL Division Series against the Atlanta Braves.

The biggest first inning in MLB playoff history stunned the crowd at SunTrust Park on Wednesday and put the Braves on course to tie a big league record with their 10th straight postseason first-round loss.

Atlanta starter Mike Foltynewicz, who pitched seven scoreless innings in Game 2, retired only one hitter. A huge error by first baseman Freddie Freeman cost the Braves a chance to get out of the inning with only one run scoring.

Tommy Edman, Dexter Fowler and Kolten Wong each had a two-run double, Cardinals pitcher Jack Flaherty walked with the bases loaded to force in a run, and St. Louis added to the Braves' misery by scoring its final run on a strikeout.

Marcell Ozuna swung at a pitch in the dirt was already heading back to the dugout when he realized the pitch had gotten by Brian McCann. The catcher fell down trying to retrieve the ball and his throw to first to too late to get the late-running Ozuna.

The Cardinals sent 14 batters to the plate before Max Fried finally got the final out.